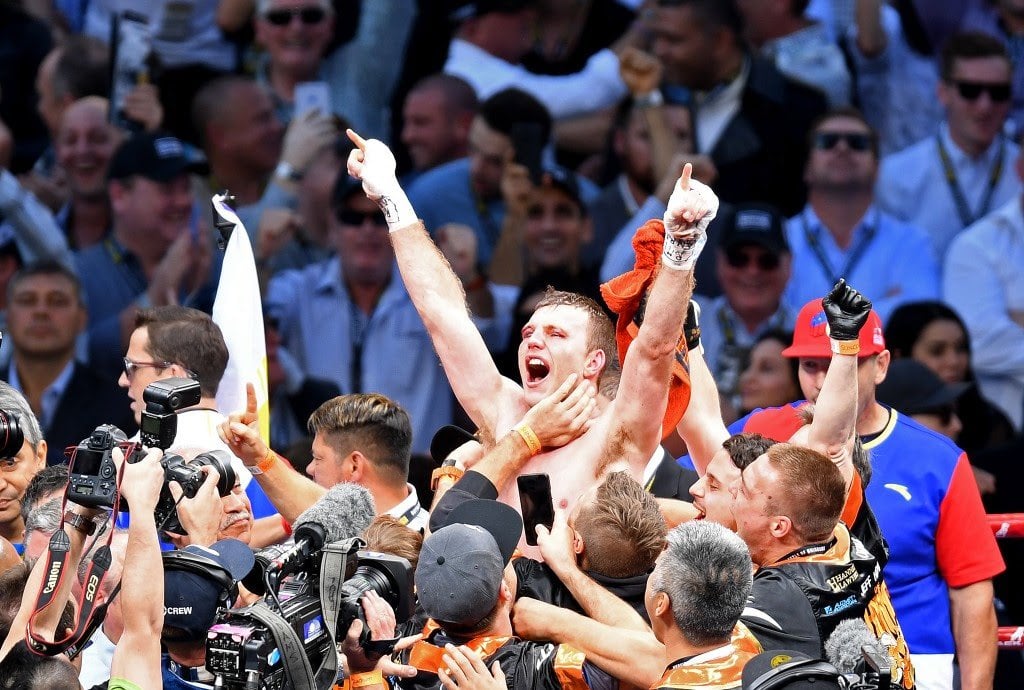 Jeff Horn (19-1-1, 13 KOs) looked like a new man on Friday night in smashing former 168 lb world champion Anthony Mundine (48-9, 28 KOs) by a 1st round knockout in front of a huge crowd of onlookers at the Suncorp Stadium in Brisbane, Australia. At the opening bell, Horn tore into the 43-year-old Mundine with power shots with both hands. There was virtually no resistance from Mundine, being that he lacked the speed to answer back with anything to keep the 30-year-old Horn off of him. On paper it was an interesting idea for Horn and Mundine to fight each other, but in reality it turned out to be a non-competitive fight. Mundine was too old, too slow and too past his prime to present any kind of resistance to Horn.

Midway through the round, Horn landed a crushing left hand that put Mundine down. The referee Phil Austin was forced to stop the contest at that point. The fight was stopped at 1:36 of the 1st.

Mundine was never able to get untracked to land his own big shots. The fight took place at a catchweight of 156.5 lbs, which is well below Mundine’s old fighting weight of 168 lbs. Although Mundine has been fighting as low as 154 in the last four years since 2014, he’s not as powerful at that weight as he wa when he was fighting at 168. Mundine doesn’t carry fat on his lean frame, so he clearly has been sacrificing muscle to fight in weight well below his optimal weight.

Mundine is said to be retiring following the loss. However, there’s always a possibility that a fighter as popular as Mundine could return under the right circumstances. Mundine is still arguably the best fighter in the history of Australian boxing.

The win for Horn might plant some ideas in his head, making him think he could do something similar if he were to move back down to 147 to take on the top welterweights. That might not be a good idea for Horn. He looks drained at 147, and he was horrible in his 9th round knockout loss to Terence Crawford last June. Horn lost his World Boxing Organization welterweight title in that defeat at the hands of Crawford. This was the WBO title that Horn had won under controversial circumstance a year earlier in beating Manny Pacquiao by a 12 round unanimous decision in 2017 in Brisbane, Australia. For all intents and purposes, Horn has lost 2 out of his last 3 fights at welterweight if you count his win over Pacquiao as a loss. Moving back down to 147 could be a recipe for disaster for Horn. He can probably make some good money in a second fight against Crawford, but that’s likely the only money fight for him at welterweight. There’s a whole section of fighters that Horn likely will never get a chance to fight with the Premier Boxing Champions fighters. Horn should scout out the other weight classes at junior middleweight and middleweight and look for big fights in those weight classes.