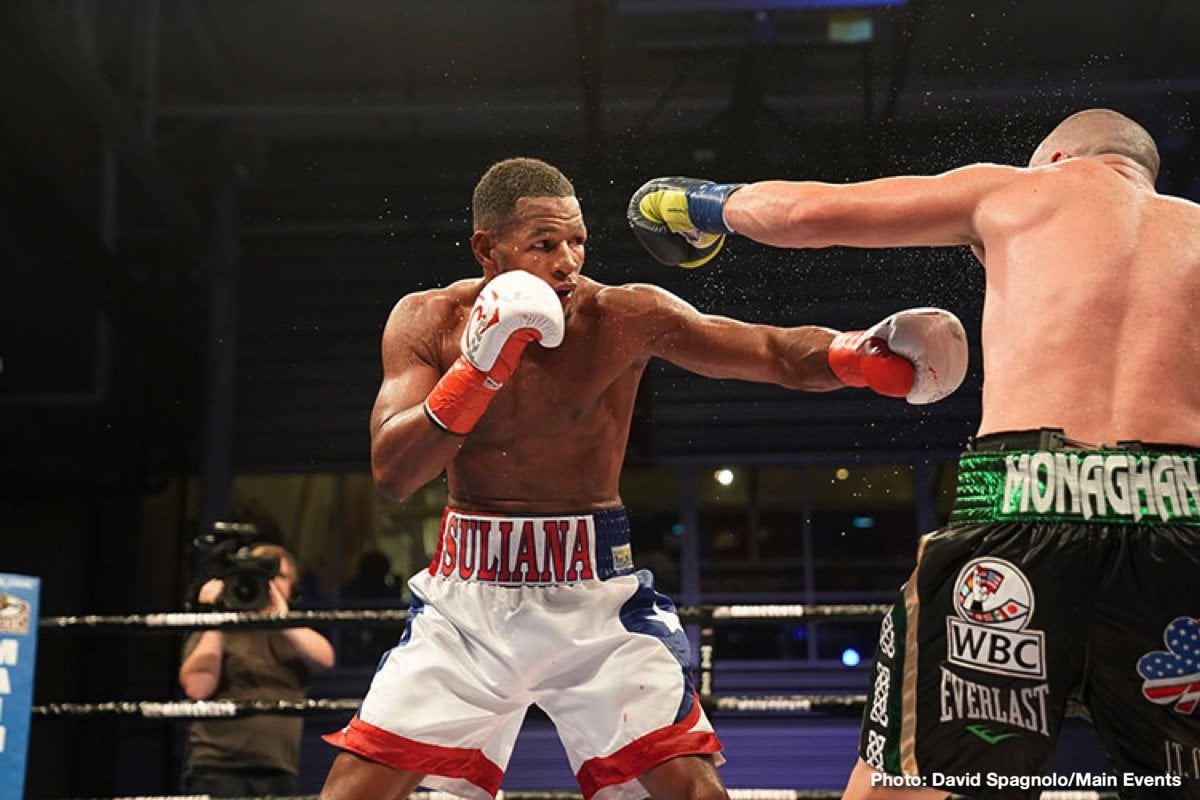 Both men knew the stakes were high, and brought the action, fighting hard through every round and leaving nothing in the ring by the final bell. They stayed in the center of the ring, neither man wanting to give an inch to his opponent. It was the kind of action packed contest the Brooklyn fans love.

“He was a strong guy. I told the guys before the fight, he’s a tough light heavyweight,” Barrera explained after the victory. “My coach and I, we know it’s no easy fight.”

Barrera said he would have liked to get a knockout, and thought he had a chance in the eighth round. “I know his face, he was a little bit tired. I tried to knock him out, but he’s a strong guy,” said Barrera. He said being inactive since last March due to injury made it a more ambitious goal than he thought.

After a slow start, Barrera began rolling up power punches as the fight went into the middle rounds. His left hook was especially effective. Barrera landed double the number of power shots as Monaghan, 144 punches of 392 thrown (36.7 percent) to 72 of 249 power punches (28.9 percent) for Monaghan.

Barrera says he’s now eager to challenge the men at the top of his very competitive division. “We are ready for everyone. I proved tonight I’m a tough light heavyweight.” said Barrera.

The super middleweight delivered a high volume of power shots, including an impressive barrage of body shots which made all the difference throughout a rough and tumble fight. Douglin was the far busier man, landing 246 of 783 punches in six rounds (31 percent connect rate) against just 87 of 458 punches (19 percent) for Roman. Douglin dropped Roman four times over the course of the fight, and twice in the sixth round to the body to get the win.

“I give myself a C-plus,” said Douglin of the win. “I got the win, that’s the most important thing. I’ll be back in the gym on Monday. I was looking for the knockout too much. I should have sat back and boxed But we are really happy we got the win, we got the knockout.” Douglin’s trainer, his mother Saphya, gave him a C. “When he listens, the results begin,” she said.

“I just have fun in here, this is so much fun to me. Boxing’s my job, but I love it. It’s a great passion for me. I’m in the ring having fun, I can hear everybody,” said Douglin. When asked about being trained by his mother, Douglin said “You have someone in your corner that truly cares about you, it makes a world of difference. Not everyone can do this, it’s very special,” as Douglin thanked her with a hug and kiss.

Heavyweight Cassius Chaney (14-0, 8 KOs) of New London, Connecticut gave his fans a scare, surviving a second round knockdown and coming back to deliver a fourth round knockout victory over Santino Turnbow of Cincinnati, Ohio (4-3, 3 KOs) and remain undefeat4ed.

Chaney was caught by an overhand left he later said he never saw. He got to his feet and survived the rest of the round. Chaney and Turnbow traded power punches as both tried to close the show. It was Chaney who scored the victory when he hit Turnbow with a series of punches, ending in a textbook straight right punch, dropping the big man to the canvas for good at 1:04 of the fourth round.

“I’ve just got to stop overthinking a little bit and let my punches flow like my trainers are telling me,” said Chaney after the fight. Chaney said he never saw the punch that dropped him. “He caught me with a blind one. But I know how to weather the storm, take my time and stay calm.” Chaney said he is a little disappointed about getting caught, and vowed to get back to the gym and spar with more southpaws.

Chaney said he’s happy that he learned he can still come back from adversity in a fight. “I am happy I won. I showed I got heart,” said Chaney. “I’m not really happy with (the performance). I should have kept it a little tighter defense.

“By the fourth round I realized he was going to keep trying the same punch. I decided to just be more defensive and slam my right hand in there like my corner was telling me,” said the victorious Chaney.

Local favorite and former two time New York Golden Gloves champion Ismael Villarreal of Bronx, New York (4-0, 1 KO) delivered a spectacular knockout victory in 43 seconds of the first round over Travis Nero of Norman, Oklahoma. Nero never saw the counter left hook coming, dropping straight to the canvas. Nero managed to get to his feet, but referee Miguel Rosario stopped the fight as Nero was in no condition to continue. It was Villarreal’s first KO as a pro.

“It was a spectacular performance,” said Villarreal, who thanked everyone who came to see him. “It feels great to have this opportunity to perform here in Brooklyn.” Of his knockout win, Villarreal said, “Yeah, it was unexpected. For me to fight on my fourth fight and have it live, have people watching me from my house, it’s a great opportunity.”

What’s ahead in the ring for the Bronx Community College student? “I would like to see myself in more fights. Hopefully I get to five five times next year … Let’s see what happens!” said Villarreal.

“Nothing beats seeing professional boxing close to home, where family and friends can cheer for their hometown favorites, and see some of the best talent at the top of the sport at the same time,” said Kathy Duva, CEO of Main Events. “And we can bring that excitement to fans around the world thanks to the new streaming technology provided by Facebook Watch. It’s the best of all worlds.” 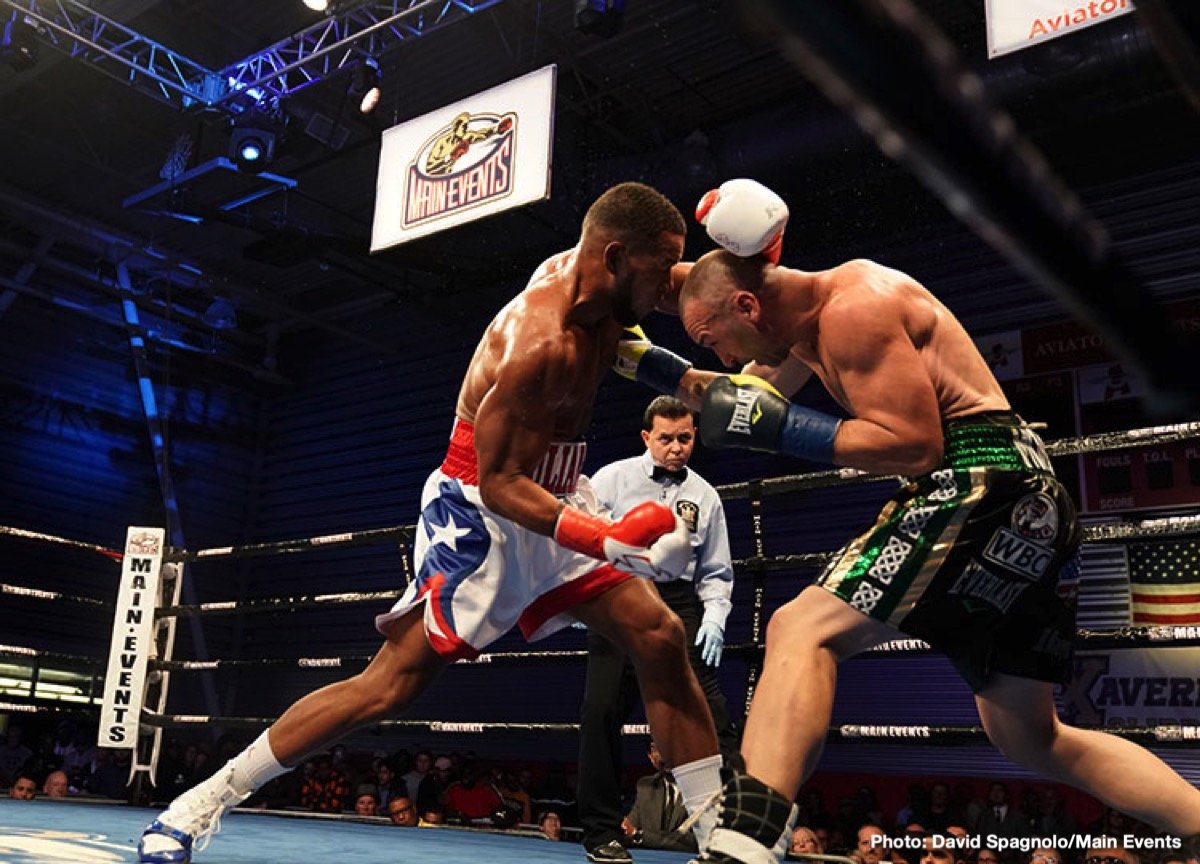 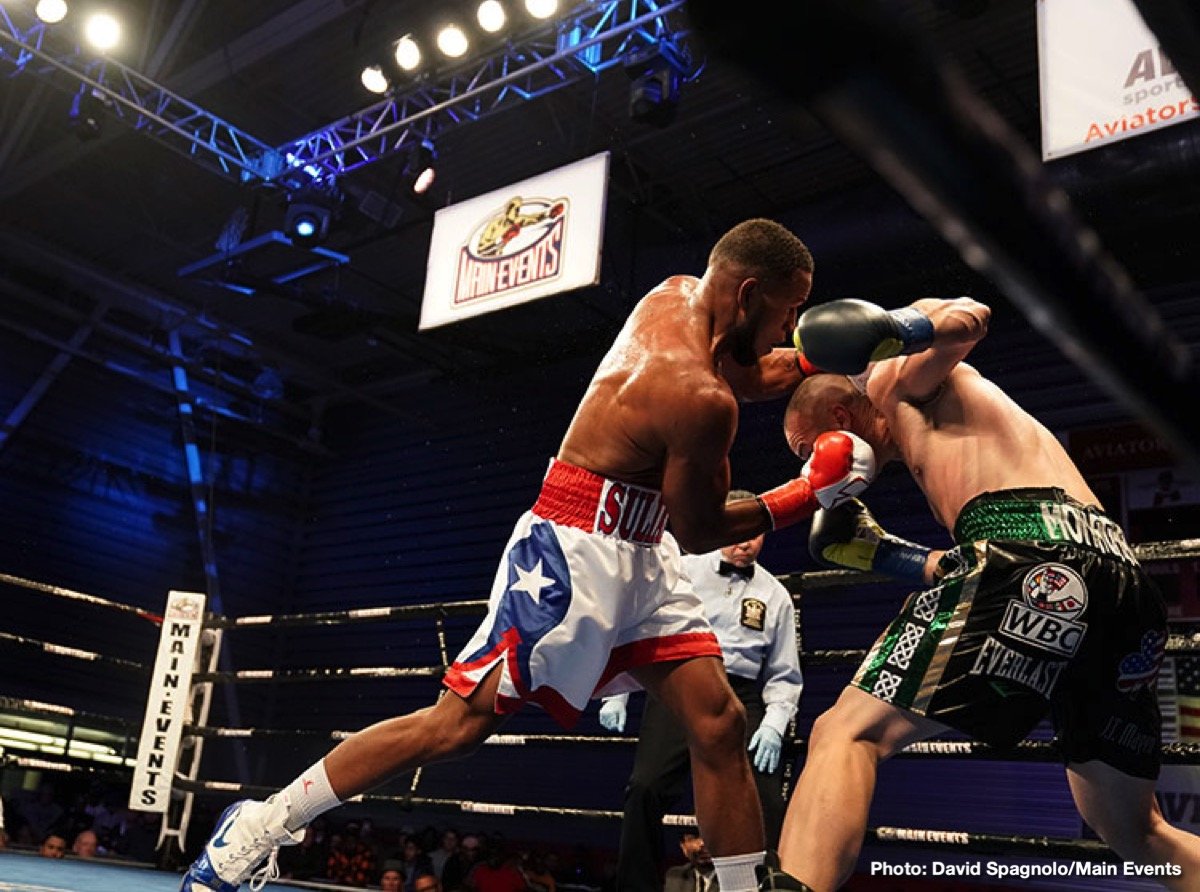 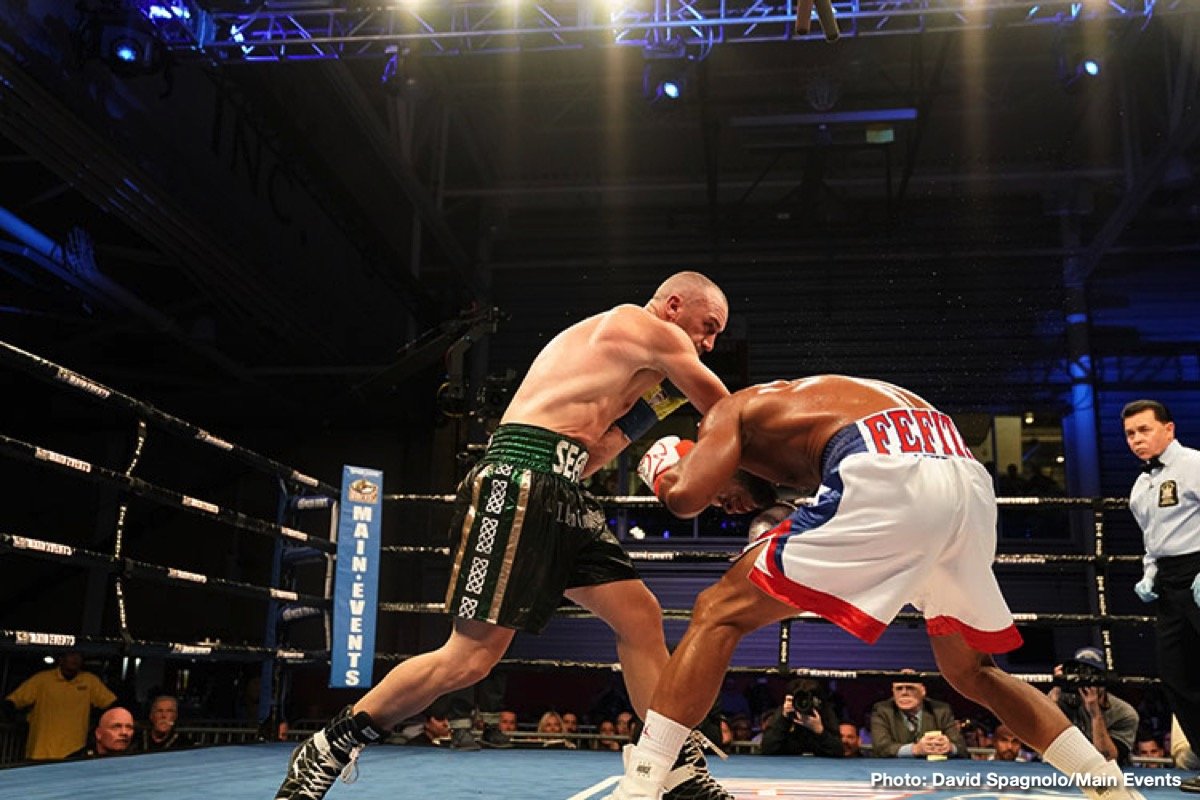 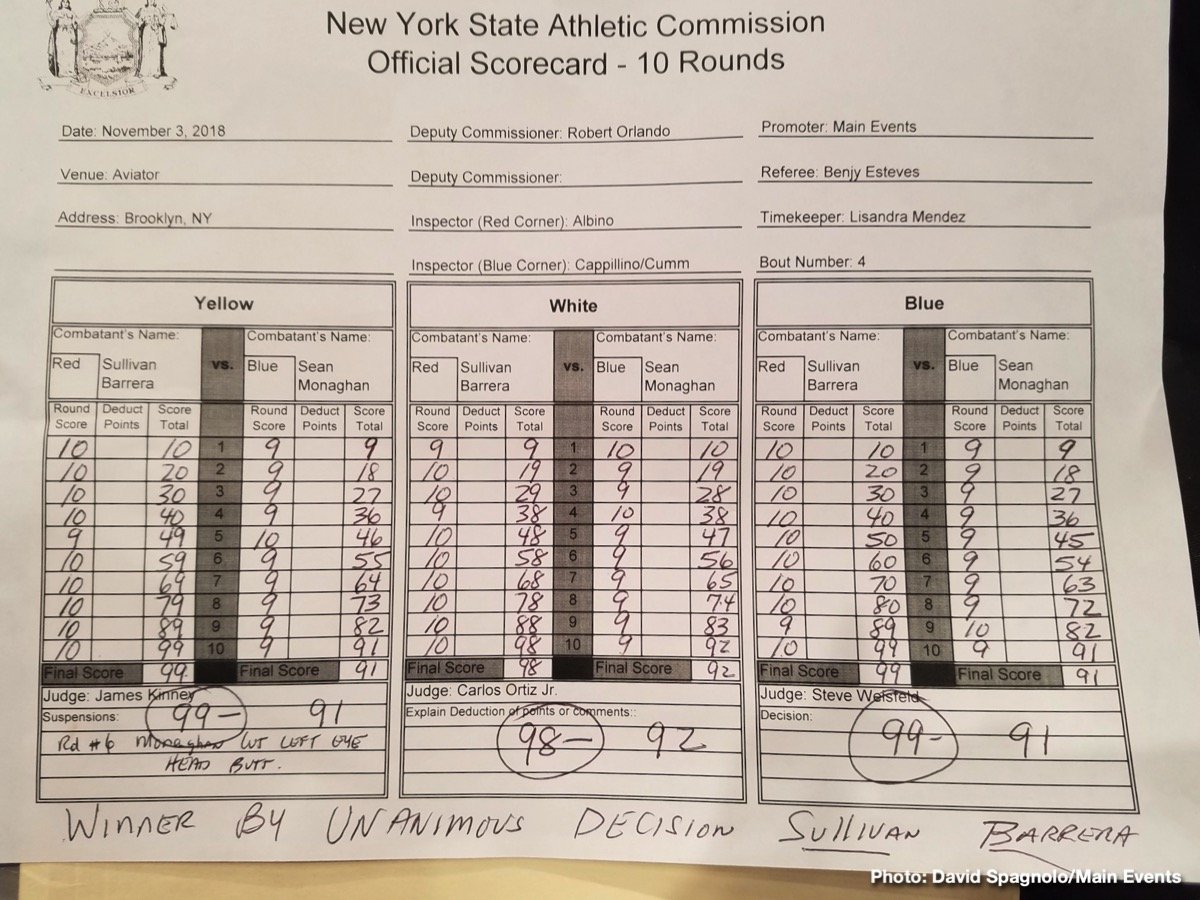