In sad news, it has been reported how former Canadian heavyweight champion and all-around tough guy Conroy Nelson has passed away. Nelson was 62 and he had been battling pancreatic cancer, he died from a heart attack.

Born in Jamaica, Nelson relocated to Canada, where he won the heavyweight title in 1990, and he spent the final 20 years of his life back in Jamaica.

You will have seen Conroy Nelson fight, if you are of a certain age, anyway. Back in the 1980s and ’90s, Nelson, never picking and choosing or looking for easy fights, faced so many big names, often on short notice.

Going pro in November of 1978, Nelson won his debut but then, after an early draw and then a 1980 KO loss, he slipped into journeyman mode; although Nelson was good enough to win that Canadian title.

Trevor Berbick stopped Nelson in a couple of rounds in a Canadian and Commonwealth heavyweight title fight in 1981, and soon enough, Nelson was being put in with big names and he was losing: Donovan “Razor” Ruddock defeated Nelson in September of 1983 (although Nelson did take Ruddock the distance), while a young Mike Tyson took Nelson out in two rounds in 1985. 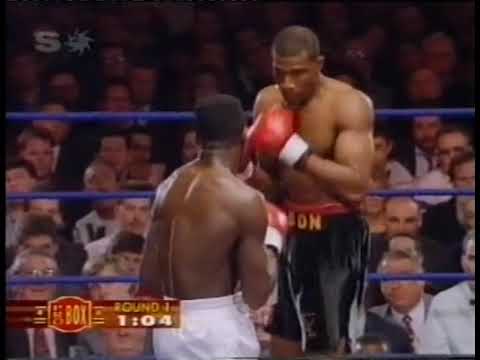 From November of 1986 through July of 1988, Nelson could not get a win, being beaten by Willie de Witt, Barry Forbes, Jimmy Gradson, Bernardo Mercado and Alex Stewart.

But then, in December of 1990, Nelson stopped Ken Lakusta to become Canadian heavyweight champ – this at the fourth attempt. Nelson also managed to turn the tables on Lakusta, who he had previously been defeated by in two earlier fights.

Next up after winning the only major belt he would ever get his hands on, Nelson was stopped by Bert Cooper. Later, Herbie Hide and Riddick Bowe stopped Nelson.

By now well into his 30s, Nelson’s final win of note came in October of 1991, this against Gordon Racette, who Nelson stopped in defending the Canadian title.

Nelson retired after a stoppage loss to Timo Hoffman in early 1998. Nelson’s final ring record reads 21-24-2(13). A losing record, yes, but Nelson was a good fighter, a brave fighter, and a happy-go-lucky kind of guy by all accounts.

Reports say Conroy lived a totally down-to-earth life, his final days spent living and working on a farm in Jamaica. Our condolences go out to Conroy’s family and friends.