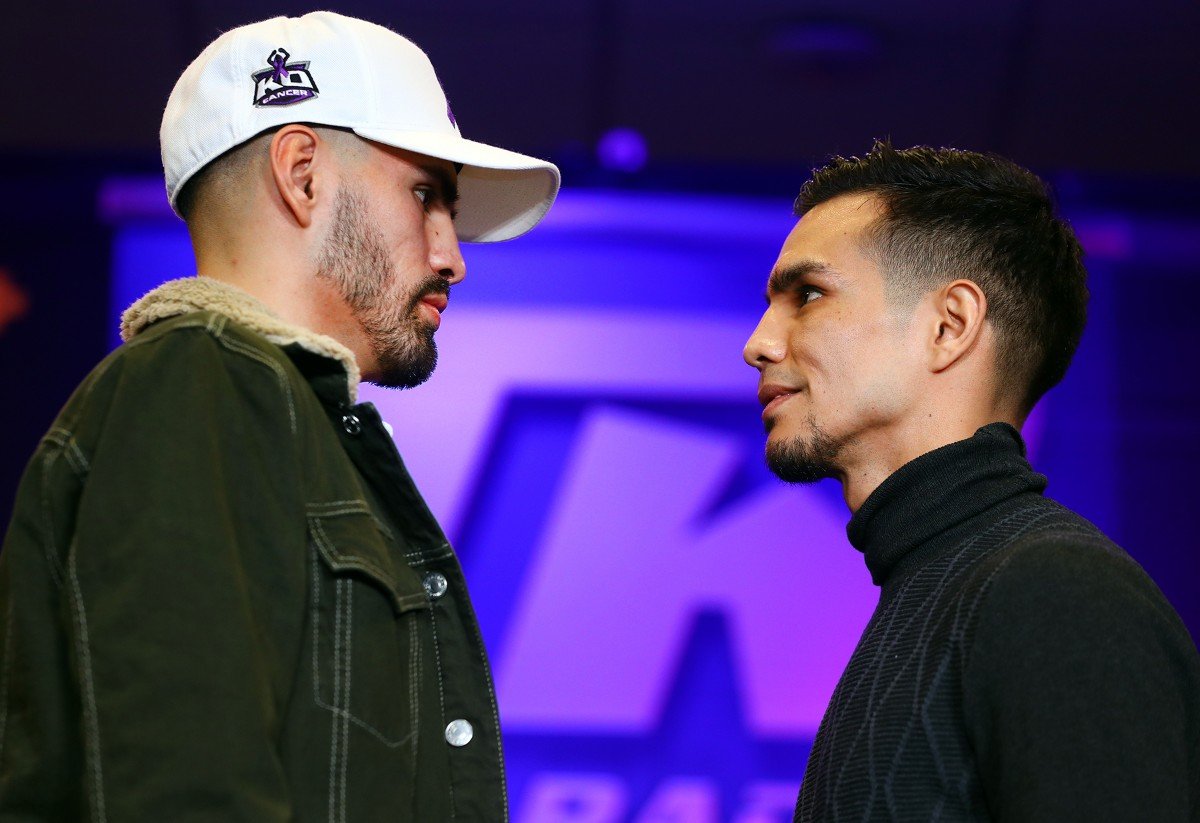 Fresno’s professional franchise, Jose Ramirez, is set for another world title defense homecoming. Ramirez (23-0, 16 KOs) will seek to make the second successful defense of his WBC super lightweight world title against Jose “Chon” Zepeda (30-1, 25 KOs) on Sunday from the Save Mart Center in Fresno, Calif. In the co-feature, former lightweight world champion Ray Beltran will tussle with the unbeaten Hiroki Okada in a 140-pound battle.

And, in a special attraction, 18-year-old sensation Gabriel Flores Jr. will look to move to 12-0 against Alex Torres Rynn in a six-round lightweight bout.

Here is what the fighters had to say at the final press conference Friday at Tachi Palace Hotel & Casino.

On his second fight working with trainer Robert Garcia

“I feel like I’m growing as a fighter. The older I get, the more mature I feel, the more experience I get. I feel like every fight I improve my skills and power. I’m very thankful to have a {trainer} like Robert Garcia. I train in a lot of gyms, but no gym has a family-oriented atmosphere like the Robert Garcia Boxing Academy.”

“I feel like I have so many tools in my toolbox, and I’m ready for a guy like Jose Zepeda. He’s a good fighter. He’s a very smart fighter. He doesn’t over-commit. He likes to keep his distance, and I’m ready for that. He’s the type of experienced fighter that’s only going to make me grow.I’m just honored to be a part of this big fight. There are no easy fights as a world champion. Everybody wants to fight you because they have more to win, obviously. For me, it’s another title defense, but in my mind, I train like I’m an underdog. I train like it’s my first world title.”

On his second world title shot

“My first title shot {against Terry Flanagan} was three years ago, and my shoulder gave in and I wasn’t able to continue. I feel like I was ready for that fight. It didn’t work out. After that, I kept working, and I fought probably three months after that. I kept fighting, and three years later, I get the opportunity against Ramirez. I would like to thank Jose Ramirez and his team, especially to fight in this event to KO cancer.”

“Freddie is probably the smartest coach out there. He trained Jose, and he told me what everybody knows. He’s a tough fighter, and he has a will to win. We have to box him. He’s a strong guy. Working with Freddie Roach has been great. Like I said, he’s very smart. His advice is great, and we’re ready for this fight.”

“It’s every boxer’s dream {to win a world title.} I get a second opportunity. I’m working hard. Hopefully no accidents happen. That’s all I pray for.”

On rebounding from the Jose Pedraza defeat

“My last fight, I didn’t expect to lose. I made some mistakes. That’s in the past. I’m the type of person that can’t give up. I’m going to get up and keep moving forward.”

“I would like to thank Bob Arum, Rick Mirigian, and everyone from Top Rank and ESPN who made this great opportunity possible. It’s an honor to be fighting for such a worthy cause. As far as being shown on ESPN to such an enormous audience, I am the former Japanese champion and the former WBO Asia Pacific champion. I am known as a boxer in Japan, but the American audience doesn’t really know who I am. I had a great learning experience last time in my first fight in America. I love it here. I’m prepared to build on that, and I want to make a good impression and show my skills to the American audience.”

“Everybody in Japan and in the boxing world knows who Ray Beltran is. It’s an honor just to be able to get in the ring with him. I know he’s very tough and very skilled. In order to win, I’ve trained harder than I ever have. This is the chance of my lifetime. I have sparred a lot of good fighters, including Takeshi Inoue, who went neck and neck with Jaime Munguia just recently. ‘m going to put everything into it to win this fight on Sunday.”

“I’ve been seeing this all over social media. This is going to be my {breakout} year. I feel great. I got a nutritionist now, a great one. I feel like it’s helping me a lot. I’m really focused. We’re getting great sparring with world champions, and we’re making sure that we are ready all the way. The momentum is just going to keep growing and growing.”

Use the hashtags #RamirezZepeda and #KOCancer to join the conversation on social media.