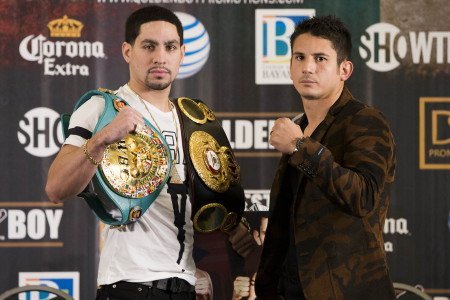 [On fighting in Puerto Rico] “It means a lot to me. Everybody in the stands is going to be Puerto Rican. I’ve never had that before.

“Even though I’m from Philly, that’s not my heritage. It’s important for me to reach out to my fans because I think Puerto Rican boxing needs this right now.

“I know this is a huge opportunity, and I’m going to take full advantage of it.

“To have a shot at Danny’s belts has been a dream of mine for a long time.

“Danny Garcia is an intelligent and tough fighter, but so am I.

“I’m coming to Puerto Rico and I know there is a lot of pressure, but hopefully they will support me too.”

“I’m excited about this great opportunity. I have the people of Puerto Rico confident in me and their support means everything to me.

“I’m prepared for this fight and I know that it’s going to be a tough one. I’m going to give it my all.”

“I’m happy to be here in Puerto Rico. I’ve been training hard and I’m ready for this rematch.

“It’s been five years [since our last fight] and I know that JuanMa is going to come in strong. He’s a great fighter, but I’m coming in fully prepared for this fight.”

“March 15 is going to be like no other. Herrera has never fought a Puerto Rican and my son Danny is 100 percent Puerto Rican.

“My wife and I are both Puerto Rican, and like it or not, Danny is Boricua. It’s always been a dream of his to fight in Puerto Rico, so we’re happy to see that coming to pass.”

“Puerto Rico has long been one of the hotbeds for boxing, with great fighters like Felix Trinidad, Wilfred Benitez, Miguel Cotto and Wilfredo Gomez all hailing from the island. So when we found out we were bringing this event to Bayamon, we knew we had to make it something special, and we’ve got a spectacular lineup of fights for the fans on March 15.

“Danny Garcia is one of the top stars in boxing today, and as a young man of Puerto Rican descent, his fight against Mauricio Herrera is not just another title defense, but a night he said he knows he will never forget.”

“I’m very thankful for this opportunity. It’s going to be a good and hard fight, but Mauricio will be prepared. The preparation and work he has put in will show on fight night. ”

“Puerto Rico is glad to have such a big showcase. The Mayor wants to thank Danny for bringing a world-class fight to Bayamon.

“We know that Danny’s mom is from Bayamon, where the fight is going to take place, and we are proud he’ll be representing us on March 15.”

“In all of these years as boxing promoters, we never saw an enthusiasm like today by the fans for this event. I’m sure that the Puerto Rican fans will support Danny Garcia as the new Puerto Rican boxing star.”

Garcia vs. Herrera, a 12-round WBC Super Lightweight World Title on Saturday, March 15, is presented by Golden Boy Promotions, Swift Promotions in association with PR Best Boxing and sponsored by Corona and AT&T. It will air as the main event of the SHOWTIME CHAMPIONSHIP BOXING telecast and will be available in Spanish via secondary audio programming (SAP). In the co-main event, Deontay Wilder takes on Malik Scott, in a 12-round WBC Final Heavyweight eliminator bout presented by Golden Boy Promotions in association with Goossen Tutor Promotions. SHOWTIME Boxing on SHOWTIME EXTREME will feature Juan Manuel Lopez and Daniel Ponce de Leon in a 10-round rematch for the WBO International Junior Lightweight Title.