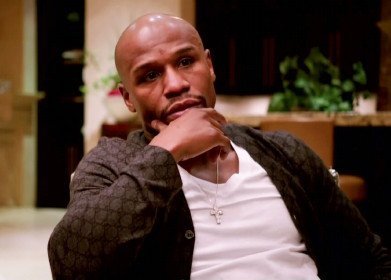 Ruben Guerrero, the father for Robert “The Ghost” Guerrero, decided to chime in on his own thoughts about the proposed Floyd Mayweather Jr. vs. Amir Khan fight on May 3rd, in Las Vegas, Nevada. Ruben doesn’t see Mayweather Jr. as having any problems at all in taking care of Khan. Ruben feels that Mayweather’s boxing skills will enable to make any adjustments he has to in order to beat the 27-year-old Khan, who sees as having a weak chin.

Ruben recently said that Mayweather had run from Robert Guerrero for 12 rounds in their fight last year, and he felt that Mayweather should have stood toe-to-toe with Robert the entire time like he said he was going to do. Well, Ruben doesn’t think Mayweather will run from Khan. He sees him standing directly in front of him i the pocket looking to land shots, because presumably there’s less to fear with Khan than with Guerrero.

“He’s [Mayweather] going to beat him,” Ruben said to hustleboss. “He’s not going to run from him. He’s going to stand in front of him. Khan don’t have a chance, so it’s easy for Floyd…he can adjust to anything.”

Poor Khan. Nobody is giving him any shot at all in beating Mayweather on May 3rd. And to top it off, Mayweather is letting the fans vote for who his next opponent will be instead of giving Khan the fight, even though Khan has been waiting for the fight for many months now. Khan even turned down a good money fight against Delvin Rodriguez last December thinking he was in line for the Mayweather fight. But it’s got to be messing with Khan’s head that Mayweather is leaving it up to the fans to select his next opponent on his website Mayweatherpromotions.com. There’s a poll on the site for fans tho choose between Marcos Maidana and Khan.