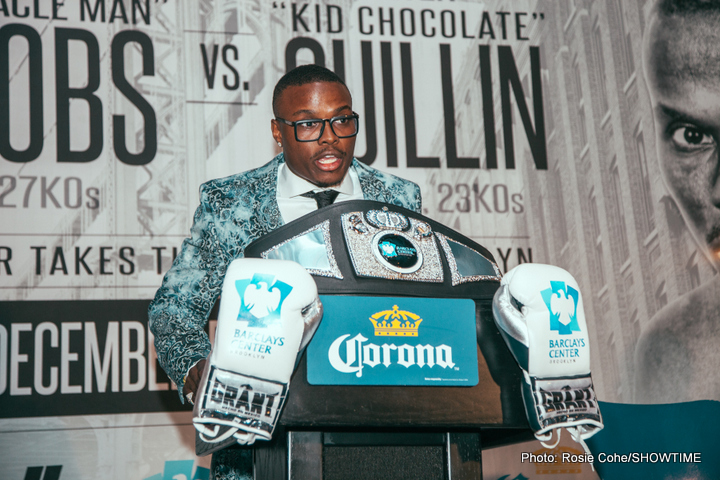 Former WBO middleweight champion, Peter Quillin (32-0-1, 23ko), says he is nothing but confident ahead of his challenge to 2nd tier WBA 160 lb champion, Daniel Jacobs in New York in 8 days time, and believes he will emerge the victor of their ‘Battle of Brooklyn.’

The two Al Haymon advised fighters go into their clash with the shadow of WBA (sup) champion, Gennady Golovkin, looming large over them, given he is the ‘true’ WBA belt holder at 160, and is ostensibly not on the radar of either fighter, despite the mandatory status Jacobs currently holds to GGG as a 2nd tier [WBA] titlist.

This has led to many fans casting a cynical eye over the fight at New York’s Barclays Centre, which will be for little more than local bragging rights should neither fighter then go on to test themselves against the divisional consensus #1 as most fans expect.

“We’re going into this fight with nothing but confidence. I’m mentally and spiritually strong,” Quillin said about the task in hand.

“I’ve been in 33 of these fights in my career. Every one of those guys has said they’re going to beat me but no one has.

“I’ve been in with a lot of different guys and I’m yet to be beat.”

Quillin was last out in September when he dispatched little-known and heavily out-gunned Australian, Michael Zerafa, inside 5 rounds, and before that battled to a draw with WBO middleweight champ, Andy Lee, back in April, yet claims this is the best he has felt in a long, long time and is turning up ‘to win’.

“This has been one of the most inspirational camps that I’ve had in my career and I’m around great people. I’m in the best shape of my life and as humble as possible.”

“I don’t have a prediction for fight night. It’s up to Daniel Jacobs to determine that — because I’m here to win,” he added.