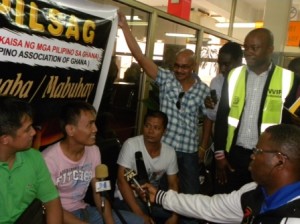 “First of all, I pray that both fighters are safe and that nothing untoward happens during the fight, I want it to be a smooth fight without any problems. I’m looking forward to a very exciting fight from both fighters and of course I’m supporting Pontillas even though Tagoe is a very good fighter.,” Ely Belarmino, Vice President of the Filipino Association of Ghana (PILSAG) told www.sportsinghana.com at the VVIP lounge at the airport.

Confident of victory themselves are Team Pontillas who have even promised an opening round kayo of the Ghanaian show-master.

“”We are very happy to be here and we thank you all for the kind welcome. The environment (in Accra) is cooler than Manila, right now our country is hotter than Ghana. But we’ve been to many placesa rounf the world to fight so no probem traveling here,” responded Bricko Santig, Manager of Ronald Pontillas.

Pontillas, himself a former Oceania and Pacific Boxing Federation (OPBF) and Philippines champion, added, confidently: “I think I can give him (Tagoe) a good fight on Friday, I can beat him. I’ve watched a few of his clips and I admit he is a very talented fighter. It won’t be easy but I’ve trained hard for this fight and even if I get him in the first round, I will knock him out,” Pontillas proclaimed confidently.