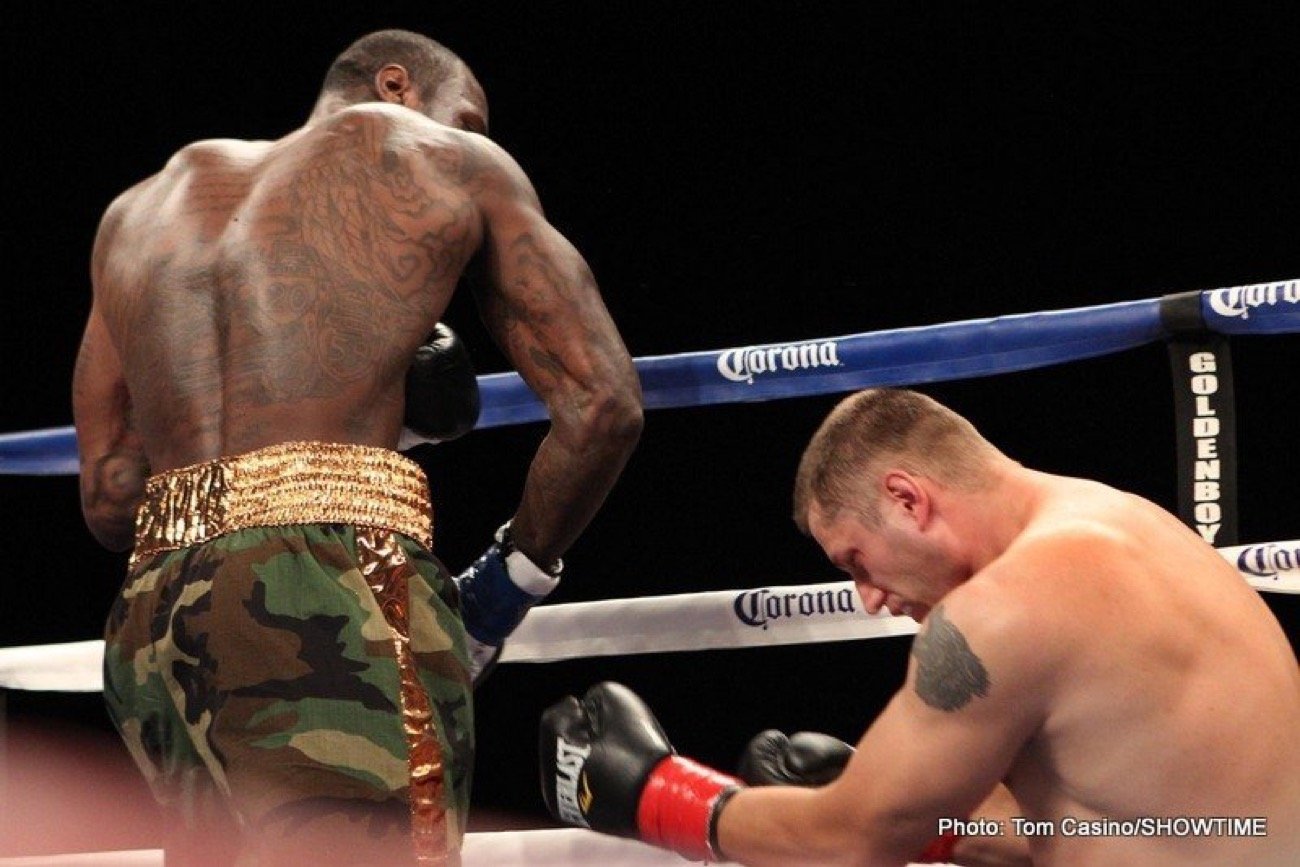 Undefeated Deontay Wilder says two prayers in his dressing room before a fight. One is a team prayer. The other, he says, is for his opponent.

“I know I’m blessed with God-given power,’’ he said after annihilating former world heavyweight champion Sergei Liakhovich in Friday’s main event on ShoBox: The New Generation from Fantasy Springs Resort Casino in Indio, Calif. “After our team prayer, I always pray that I don’t hurt the guy I’m fighting, that if he has a family he will be OK enough afterward to continue to provide for them.’’

Living up to his reputation as America’s next great heavyweight, the 6-foot-7, 27-year-old Wilder, of Tuscaloosa, Ala., destroyed Liakhovich, stopping him with two overpowering right hands at 1:43 of the first round.

It was Wilder’s 29th knockout victory in as many starts. Liakhovich, of Scottsdale, Ariz., by way of Vitebsk, Belarus, fell to 25-6 with 16 KO’s.

For Wilder, who didn’t start to box until he was 21, it was his 17th first-round knockout since turning professional in November 2008. Six of his fights were over in the second, three were done in the third and three were finished in the fourth.

He has yet to go four full rounds. Wilder is currently ranked No. 6 in the WBA and WBO, No. 15 in the IBF and No. 30 in the WBC, but he figures to move up in each of organizations after his latest, crushing performance. <

In co-featured fights, Francisco Vargas (17-0-1, 13 KO’s), of Mexico City, D.F., dominated southpaw Brandon Bennett (16-1, 7 KO’s), of Cincinnati, Ohio, winning a collision of unbeaten junior lightweights with an impressive 10-round unanimous decision and promising unbeaten junior middleweight Jermall “The Hitman” Charlo (15-0, 10 KO’s), of Houston, Texas, won his ninth in a row by knockout, flattening world-ranked Antwone Smith (23-4-1, 12 KO’s), of Miami, Fla., at 2:23 in the second round.

“The victims of the two knockouts had never been overwhelmed in that decisive a manner and that makes the wins of Charlo and Wilder noteworthy,’’ ShoBox expert analyst Steve Farhood said following the telecast. “For contrast, Vargas’ victory was a good ol’ fashioned beat-down. For a fighter (Vargas) to go 10 hard rounds like that after suffering a terrible cut and going past the fourth round for the first time was in its own way just as impressive as the two devastating knockouts.’’

After missing with a left hand and then landing a left, Wilder missed with a right before landing two hellacious right hands that left Liakhovich on his back. For all intents and purposes, the initial right hand to the side of the head would have been enough. But he caught Liakhovich with another right as he was starting to go down. The referee stopped the bout immediately. Liakhovich remained flat on his back for more than a minute.

“I’m just blessed with tremendous power,’’ said the personable, outgoing Wilder, a bronze medalist in the 2008 Olympic Games and the last American male boxer to medal in the Olympics. “I don’t depend on it, but it is there. I think my real secret isn’t power. It’s my speed. I think people hear about all my KO’s and tend to overlook that.

“I think all my KO’s are helping me get a lot of people’s attention and I love that. I embrace it. I think more people are now starting to feel that maybe I can be the guy who brings the heavyweight title back to America. Honestly, I would love to be that guy.’’

Vargas, a 2008 Olympian for Mexico, looked sensational against Bennett, who was walked into the ring by his lifelong friend, budding boxing superstar-turned-rapper, Adrien Broner. Vargas, who’s appeared three times on SHOWTIME EXTREME, won the ShoBox debut for both boxers by the scores of 99-91, 99-90 and 98-92.

There were no knockdowns in a fast-paced affair, but the aggressive-minded Vargas, a crowd favorite and popular winner, mostly had his way, landing countless combinations to the head and body despite getting badly cut over his left eye in the fifth round by an unintentional head butt.

“I knew this fight was going to be complicated but I knew with pressure I could win,’’ said Vargas, an eight-time Mexican national amateur champion who didn’t turn pro until he was 25. “I was scared when I got cut because in the ring you can’t tell how big of a cut it is. All the preparation and hard work that I did in the mountains of Otomi in Mexico paid off. I am very happy with this fight and with my performance.’’

Said Bennett: “His strength and speed didn’t surprise me. I just didn’t stick to my game plan. I should have stayed in the middle of the ring. I thought I had him after the first two rounds, but he closed the gap on me in the third and that got me out of my game plan. Instead of just throwing, I waited. Maybe we’ll meet again one day.’’

Charlo, who was making his ShoBox debut after two appearances on SHOWTIME EXTREME, continues to emerge from his twin brother, Jermell’s shadow. His first scheduled 10-rounder ended shortly after he decked Smith with an overhand right hand. Smith made it to his feet at the count of five, but the referee waved it off moments later.

“I wasn’t surprised at all that the fight ended so quickly,’’ Charlo said. “The fight went exactly as I expected. Everything my trainer, Ronnie Shields, said would happen happened. This is a great feeling. We accomplished everything we trained for and did exactly what we wanted to do.’’

Smith, who weighed in five pounds over the contracted weight of 154 pounds and could not weigh more than 165 for the fight, said “my weight issues had nothing to do with this. I felt normal – until I got hit.’’

The telecast included highlights from undefeated featherweight Gary Russell’s lopsided 10-round decision over Juan Ruiz of Panorama City, Calif. Russell, of Capitol Heights, Md., upped his record to 23-0; Ruiz is 23-13. 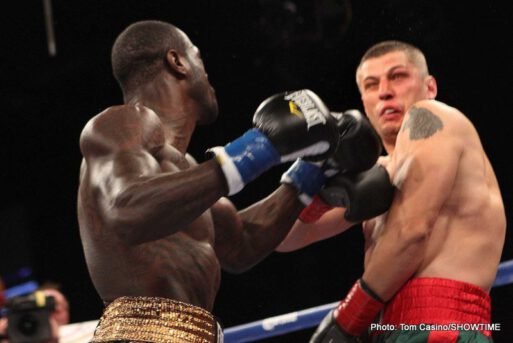 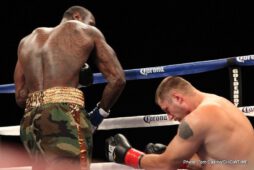 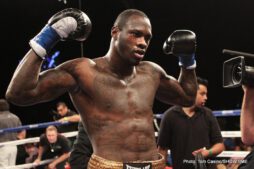 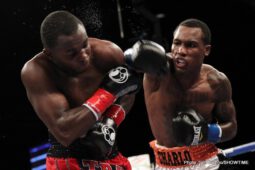 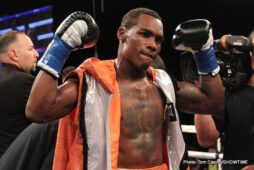 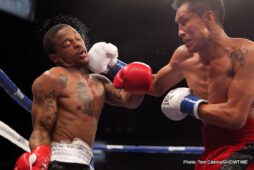 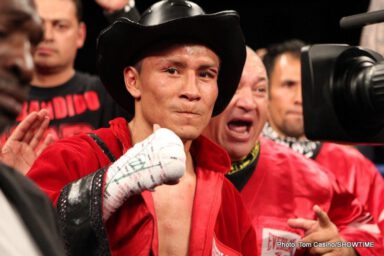 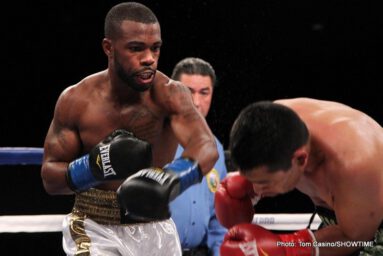