Paulie Malignaggi questions whether Canelo Alvarez still has the hunger to compete as he heads into his trilogy fight against Gennadiy Golovkin on September 17th.

From what Malignaggi saw of Canelo (57-2-2, 39 KOs) in his loss to Dmitry Bivol last May, he didn’t look like he had the hunger. Malignaggi feels that Canelo was too accepting of losing every round to Bivol.

Although Malignaggi feels that the 40-year-old Golovkin (42-1-1, 37 KOs) is old, it’s still going to require that Canelo be hungry to beat him.

If Canelo’s mind is focusing on his golf game, he’s going to be in for a long night against Golovkin in their headliner on DAZN pay-per-view at the T-Mobile Arena in Las Vegas.

Canelo says he had some kind of training camp problem that he carried with him into his last fight against WBA light heavyweight champion Bivol. While Canelo isn’t saying what the issue is, it suggests that he was injured or perhaps ill during camp.

Either way, Canelo looked tired after the second round against Bivol and was never really competitive in the true sense.

“Sometimes I think Golovkin is too old, but then sometimes I wonder how motivated Canelo is. He didn’t look very motivated in the Bivol fight,” said Paulie Malignaggi to Fighthype about next Saturday’s third fight between Canelo Alvarez and Gennadiy Golovkin.

“He [Canelo] was very accepting of losing every round like that. So, I don’t know. I guess it depends on how hungry Canelo is because I think Golovkin is past his best and old.

“You still have to be a bit hungry to beat him. I guess we’ll find out if Canelo is hungry.

“That’s a bit weird, the whole Mexican [argument Canelo has for not fighting them]. You guys know better than me. Is Julio Cesar Chavez Jr Mexican? But he sucks. He fought him because he sucks,” said Malignaggi about Canelo fighting Chavez Jr in 2017.

“When the Mexicans know how to fight, you won’t fight them? You got to get a better excuse than that because then you’re asking for that kind of criticism.

“If you want to fight him, fight him, but don’t make that up, bro,” said Malignaggi about Canelo not wanting to fight other Mexicans. “You got Julio Cesar Chavez Jr on your record, bro.

“If you’ve got Julio Cesar Chavez Jr on your record, don’t make that up, bro. That’s the last thing he should be using not to fight Zurdo or Benavidez.

“Zurdo vs. Bivol is a great fight, by the way. I’m really looking forward to that one. That’s a fight for the hardcore fans. I don’t know [who wins]. Honest, I don’t know. As it gets closer, maybe I’ll make up my mind. A very good fight,” said Malignaggi. 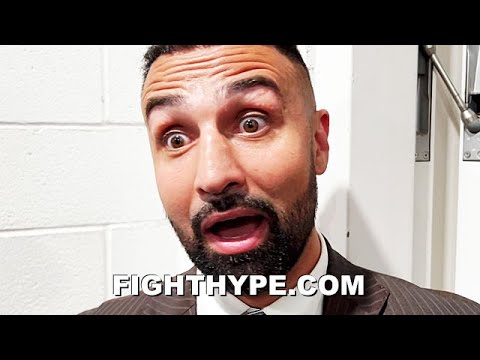