Today in Queensland, Australia, rugby player turned boxer Paul Gallen fought twice on the same card. And the 41-year-old won both bouts. In his first fight of the night, Gallen won with some ease as he picked up a four-round decision over a bloodied Ben Hannant, now 0-2, with Gallen winning by commanding scores of 40-36, 40-36 and 40-37. Gallen improved to 13-2(7) with the win.

Then, coming back for the main event, Gallen had a real slugfest with Justin Hodges. And a huge scare. The two heavies banged away in a fight well worth checking out on YouTube. Gallen had to eat some heavy leather in the opening round, as the younger Hodges cracked him with some notable blows. Things got worse for Gallen in round two, as he was knocked down. The upset looked to be on; that and the idea of fighting two guys in one night was being made to look like a foolish one.

But Gallen, showing heart, came back and he had Hodges, 5-2(2) rocking and reeling himself at the end of the session. Then, in the third round, Gallen poured it on, pounding away at Hodges, forcing the ending of the war by way of referee stoppage. Gallen is now 14-2(8).

It was a thrilling way to make a small piece of boxing history, and Gallen deserves credit for defeating two decent if not world class fighters over the course of one evening. Hodges, though, said the referee’s decision to stop the fight was “complete bulls**t!” and he is demanding a rematch. According to reports, this rematch may come in November as Gallen has one fight left on his current fight contract and this rematch seems to be a natural.

Gallen-Hodges II could be a six-rounder, not a four-round fight. Bring it on, says everyone who saw today’s short and sweet slugfest! Not every fight can be a display of The Sweet Science, yet a wild, raw power show like the one these two warriors gave us today is always welcome. 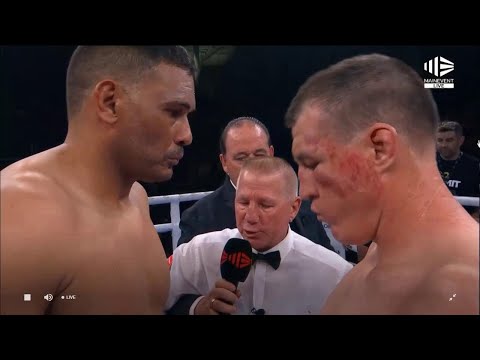