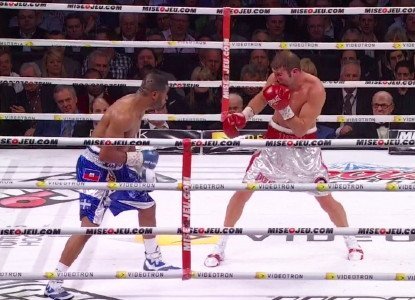 Jean Pascal’s one-sided victory over Lucien Bute last Saturday night at the Bell Centre in Montreal, Quebec, Canada ended with questions, not about the scoring, but about the fighters themselves. The fight didn’t have the kind of excitement fight fans had hoped for. For years, Canadians wanted to see these two warriors meet. Sadly, the matchup came too late in their careers.

Pascal won by a wide margin, but considering the way Bute fought, it wasn’t much of an accomplishment. Bute didn’t rally until late. His effort lacked the drama of Julio Cesar Chavez, Jr.’s knockdown rally against Sergio Martinez. Bute’s fans certainly were hoping for similar results. His late rally gave his fans a glimmer of hope. It appeared Pascal was reeling, maybe ready to go? Then he burst out of his defensive shell, and started ripping off his own looping shots, sapping the enthusiasm out of Bute fans.

Questions remained, “Was Pascal really hurt”?, or “Was he running out of gas”, or possibly “Was he playing possum”? Only Pascal can answer the questions concerning his late fight inaction. In his post-fight comments, he muttered something about trying to “…Make the fight more exciting, so maybe there would be a rematch…”! Not many believed him. It’s more likely he ran out of gas. After all, didn’t he tire against Froch, Dawson and Hopkins? If the fight had gone on much longer, might he have been in serious trouble? As much as he would like to have us believe, It’s not likely he made a conscious decision to play possum in hopes of setting up a rematch. Fighters do set traps by playing possum, hoping to open up an opponent for counters. But, to play possum in hopes of creating the need for a rematch? Not likely. In answer to the final question, Was he hurt by Bute’s flurry? That too is doubtful, because nothing clean seemed to land.

If Pascal ran out of gas, what does that say about his chances against Adonis “Superman” Stevenson or Sergey “Krusher” Kovalev? Those two heavy hitters will be attacking soon and often. If Pascal tires against either of those two, he will be in deep doo doo. It’s unlikely his wild jump in style with looping swings will fluster either one of these two knockout artists. In fact, if he tries such tactics, he will get tagged with a hard counter shots between his swings. It will be like a B52 riding through artillery barrages detonating their bombs. Soon the target is obliterated to the sound of a ten count.

Therefore, even with Pascal’s impressive win over Bute, there remains a suspicion whether he can be a serious threat against either “Superman” or the “Krusher”? The fight might be exciting, at least for a while. To switch metaphors, the matchup would be like the fox against the wolf. Both have speed and sharp teeth, but the wolf has a lot more power. When the fox stops to fight, he is gobbled up with one ravenous pounce.

With Bute, the answer to “Why did he wait so long”? is Pascal finally stopped moving and attacking. Bute had a brief free hand. His man was on the ropes, right in front of him. Under the circumstances, of course he would look good, even if only for a brief moment. The answer then to “Why did Bute wait so long” is the opportunity didn’t present itself earlier. Earlier Pascal was shifting, changing direction and assailing his reluctant adversary, Bute remained frozen with indecision. Against “Superman” or the “Krusher”, the heat they throw would quickly eliminate any hesitancy or indecision on Bute’s mind. He would soon be defrosted into a motionless, lights out puddle, indecision down for the count.