Heavyweight contender Joseph Parker (29-2, 21 KOs) dodged a bullet with his 12 round split decision victory over Derek Chisora (32-11, 23 KOs) in a fight that many boxing fans felt should have gone the other way on Saturday night at the AO Arena in Manchester, UK. 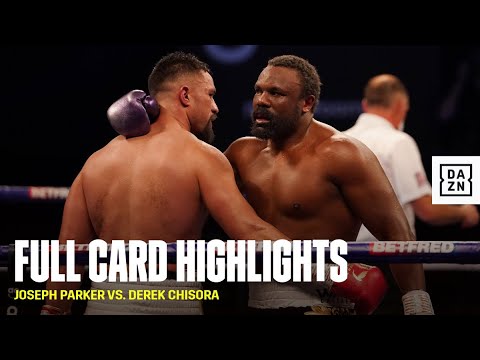 In the early going, Chisora was hammering Parker with body shots and a lot of looping punches to the back of his head.

For his part, Parker did a good job of stifling Chisora’s offense by using strategic holding to limit his offensive production.

Initially, it was thought that Parker’s early holding would lead to him gassing out in the second half of the fight, but it turned out to be Chisora that faded badly after the first six rounds of the bout.

To say that Chisora was tired in the second part of the bout is an understatement. He looked so tired that it was wonderment that Parker wasn’t able to take advantage of his fatigue.

Parker had too much respect for Chisora’s ability to catch him with a big punch, even with him as exhausted as he was.

In the second half, Parker looked he had a lot more in the gas tank than Chisora.

The New Zealander hurt Chisora in the 11th round with a big shot that sent him retreating to the ropes. However, Parker wasn’t able to capitalize on the situation due to his slow response.

Chisora says he wants a rematch to get another shot at beating Parker.

“I’m beyond getting upset now,” said Chisora after the fight. It’s difficult because I train hard, I fight, I put pressure on, and this is the treatment I get from boxing.

“My last fight [with Oleksandr Usyk]. This fight. They don’t like me. It’s disappointing,” Chisora continued in talking about the judging.

“I can’t get upset. It’s horrible. I give everything. These are the results I get. If he [Parker] wants to give me the rematch, I will take it. His coach Andy Lee said I won the fight,” said Chisora.

Overall, it wasn’t a great performance by Parker, who should have been able to knock out Chisora with him looking as exhausted as he was. Most top 5 heavyweights likely would have stopped Chisora if they’d been in there with the exhausted fighter tonight.

While Chisora remains resistant to retiring, he should kid himself. He’s clearly at the end of his career, and it’s going to get worse for him the longer he sticks around.

Chisora hasn’t won a fight since his victory over David Price two years ago.

In an impressive performance by undefeated four-belt women’s lightweight champion Katie Taylor (18-0, 6 KOs), she beat Natasha Jonas (9-2-1, 7 KOs) by a 10 round unanimous decision.

Hatton showed glimpses of the talent that we used to see in his famous dad Ricky Hatton, but the power wasn’t there.

Campbell’s shots didn’t dent the chin of the winless Dunn, and that’s worrisome. If Campbell can’t find knockout fighters at this level, it doesn’t bode well for his future.

Lightweight Jovanni Straffon (24-3-1, 16 KOs) beat contender James Tennyson (28-4, 24 KOs) by a first-round knockout. Straffon nailed Tennyson with a right-left combination that put him on the seat of his pants.

When Tennyson staggered to his feet, Staffon finished him off with a follow-up barrage of punches.

With the win, Straffon captured the vacant IBO lightweight title. The time of the stoppage was at 2:10 of round one. The question is, what next for Tennyson?