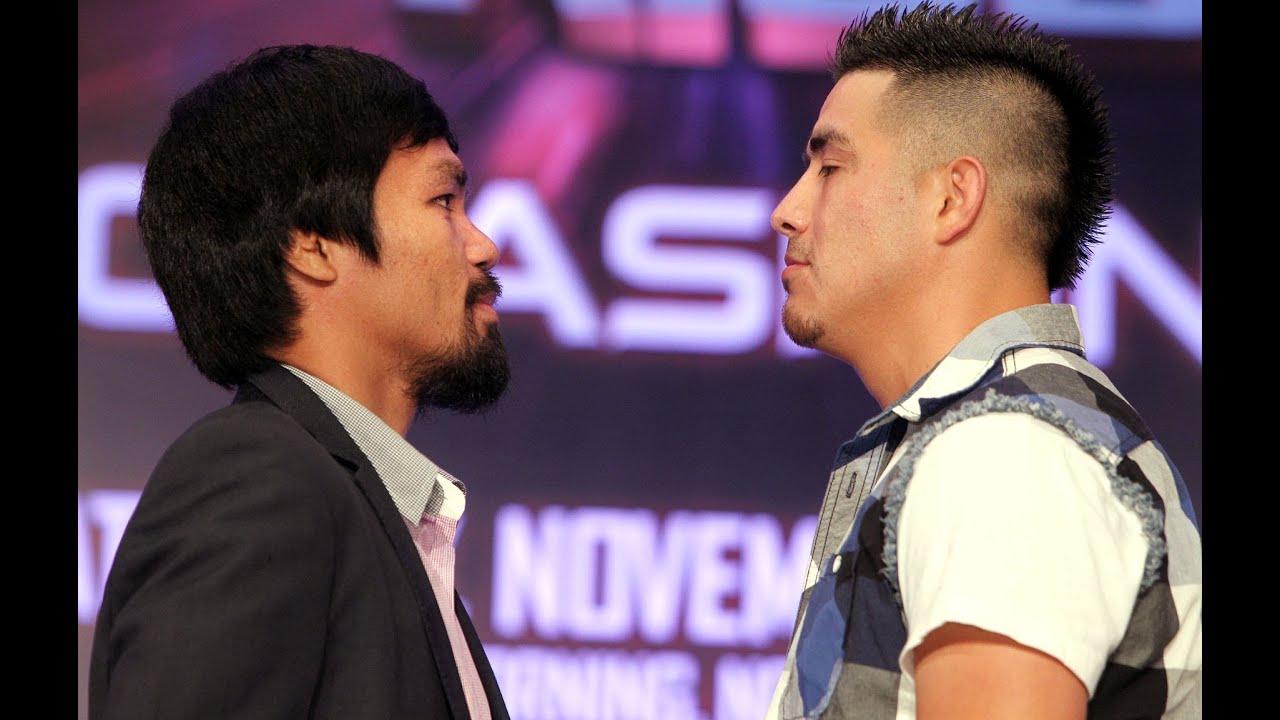 BEIJING (July 30, 2013) — Stop No. 2 on the Manny Pacquiao – Brandon Rios 23,722-mile international media tour to promote their historic 12-round welterweight rumble has landed them in Beijing. On Monday, Pacquiao, Rios and their respective trainers, Hall of Famer Freddie Roach and Trainer of the Year Robert Garcia, began the day with a little morning roadwork – approximately 3,000 steps worth — as they climbed a portion of the Great Wall, at Shuiguan, which was built during the Ming Dynasty (1368-1644), and is famous for its precipitous cliffs and beautiful views.

Before embarking on the massive climb, Rios and Garcia ducked into a souvenir stand and emerged wearing cowboy hats. “The rancheros have hit Beijing,” exclaimed Rios to the delight of the hundreds of tourists visiting and the media covering.

Pacquiao and Rios, trailed by media crews and newly-made fans, began the steep and arduous climb of the Great Wall, a military structure that was built from the 3rd Century BC to the 17th Century. With a total length of more than 20,000 kilometers, it is the only work built by human hands on this planet that can be seen from the moon.

“I hadn’t planned on beginning training camp until August 12, but I think I began it today,” said Rios, who raced up a portion of the steps against Pacquiao.

“Now I know that I’ve got my work cut out for me after racing against Brandon up those steps,” said Pacquiao. “He’s already in good condition! This is my third visit to Beijing and it always seems so new to me. It’s a great cultural experience that is saturated in history.”

Following a festive traditional Chinese lunch, the duo made a stop at Tiananmen Square where they walked around the historic area snapping photos and signing autographs for fans who recognized them.

Today, beginning at Noon, Pacquiao, Rios, Roach, Garcia, Hall of Fame promoter Bob Arum and Edward Tracy, President and CEO of Sands China Ltd, will host a news conference for national media at the Park Hyatt Beijing, followed by several hours of one-on-one interviews. Then it’s off to Shanghai for a Wednesday news conference at the Four Seasons.

QUOTABLES FROM THE NOTABLES: 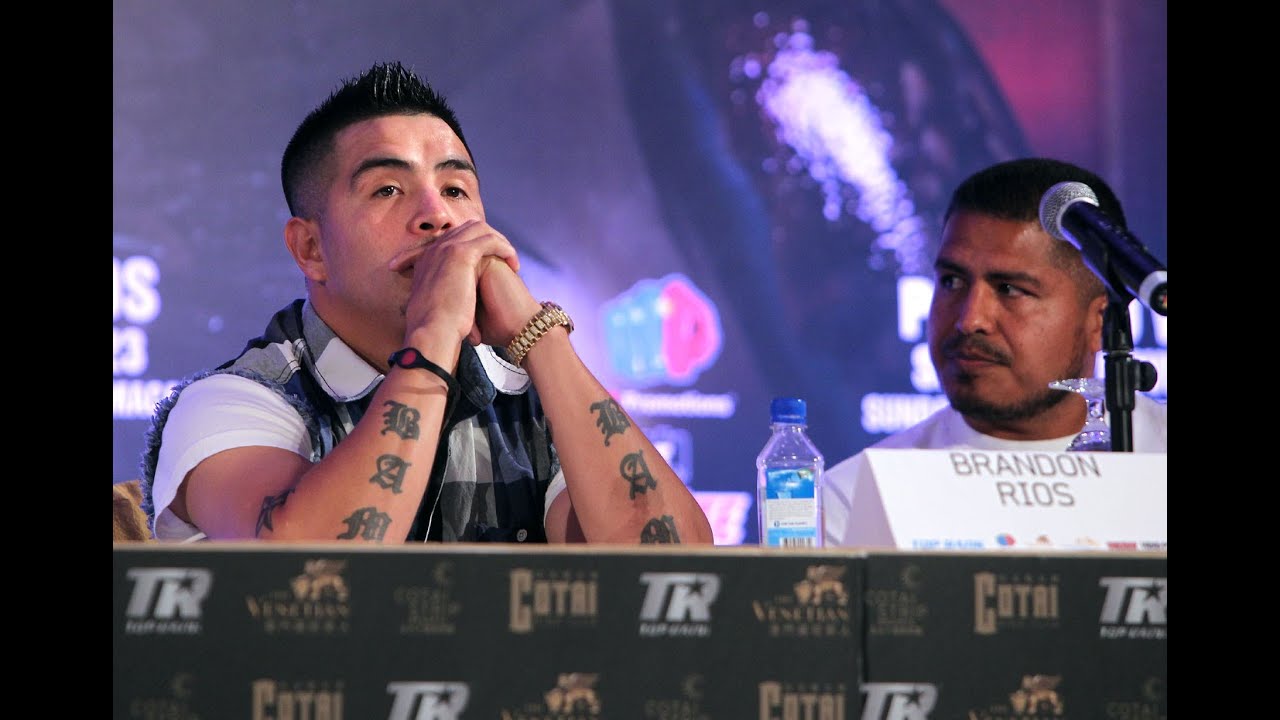 I can’t believe the beauty I have seen in Macau and Beijing. I have seen a life and culture I never imagined. It’s been an incredible experience for me. The media and the fans have been wonderful. I know I take a little getting used to but they seem to understand my sense of humor. I think some of them think I’m Chinese. The only other time I fought outside the U.S. was in Mexico back in 2008, against Ricardo Dominguez, and a lot of people thought I was Chinese there, too.

I want everyone in southern California to know that traffic on the 405 has nothing on Beijing’s rush hour.

I was surprised at how nervous I was before the first press conference in Macau. I don’t think the enormity and the significance of this event dawned on me until I walked out on the stage and saw hundreds of media there. All of a sudden I realized that I was headlining a major pay-per-view for the first time. It was emotional for me. But I’m over that now and I look forward to Beijing’s press conference today and the press conferences on the rest of the tour

My first impression of meeting Manny Pacquiao in Macau was that he was smaller than I thought he would be. I have an enormous amount of respect for him and what he has accomplished.

I will begin training camp on August 12 and work on conditioning and will start sparring right away. I love to kick off training camp with a 12-round sparring session within the first week or two to get me in the proper mindset. I will be sparring with a lot of southpaws in camp. It’s been a good while since I have fought one. I am looking forward to fighting at 147 pounds.

Manny makes a lot of mistakes and Robert and I will be working hard on making a plan to exploit them. I can’t let this opportunity slip through my fingers.

I am very excited to be fighting in Macau. It’s a fertile market for boxing. New market and new people provide great exposure for boxing and it is a great way to increase the sport’s popularity globally. Hopefully this will help develop interest in boxing in mainland China. I think it’s good for boxing to have more good Asian boxers to turn pro. I think Macau can be a boxing capital of the world.

It will be nice to fight in a location where I will not have any jet lag. Macau and the Philippines share the same time zone and the same climate. No adjustments for me this time. Since Macau is only a 90-minute flight away from the Philippines, I expect a lo mre Filipinos to be in the arena for this fight.

I have seen Rios fight and I am confident that I will win the fight. One of my advantages is my experience against better opposition. I think the question that needs to be asked is, “Is Rios ready for me?”

I will begin three months of training in August when I return to the Philippines after the media tour. I’ll do six weeks of conditioning and building up my stamina, followed by a six-week training camp with Freddie Roach when he arrives in October. I’m 34 and I now need to train over a longer period. The focus of this camp will be on speed and footwork, which have been my advantages in previous successful fights. I’ll be more careful to avoid the careless error I made against Márquez.

I was in my best shape when I fought Márquez last December. I was winning the fight. I had taken control. But I got careless and made a mistake, being in the wrong place for him to land that final punch. But that’s boxing. That’s what makes it so exciting.

I am feeling a little pressure for this fight since I have lost my previous two. An impressive victory against Rios will raise my name again in boxing. My belief in God and training as hard as I can will help to relieve that pressure.

I need to prove I still can fight like the old Manny Pacquiao. I need to restore the public’s confidence in me and my abilities. It’s important that this be an impressive victory. I have already begun to visualize my fight with Rios.

Fighter of the Decade Congressman MANNY “Pacman” PACQUIAO and former world champion and reigning hellion BRANDON “Bam Bam” RIOS will battle each other in a 12-round welterweight rumble, Saturday, November 23, from The Venetian® Macao’s CotaiArena™, in Macao, China. Promoted by Top Rank® and Sands China Ltd., in association with MP Promotions and Tecate, Pacquiao vs. Rios will be produced and distributed live by HBO Pay-Per-View, beginning at 9:00 p.m. ET / 6:00 p.m. PT.

Remaining tickets, priced from $1,275 to $115, and various ticket-hotel packages at Sands China’s Cotai Strip Resorts Macao, are now on sale and can be purchased online at www.venetianmacao.com/manny.

The Pacquiao vs. Rios telecast, which begins at 9:00 p.m. ET / 6:00 p.m. PT, will be produced and distributed live by HBO Pay-Per-View and will be available to more than 92 million pay-per-view homes. The telecast will be available in HD-TV for those viewers who can receive HD. HBO Pay-Per-View, a division of Home Box Office, Inc., is the leading supplier of event programming to the pay-per-view industry.

Sands China Ltd. has as a clear vision to establish Macao as Asia’s top entertainment destination.

The 15,000-seat Cotai Arena is the only venue in Asia ranked in Pollstar’s Top 100 Worldwide Arena Venues based on ticket sales. It is the top entertainment destination in southern China, hosting the world’s and the region’s biggest names in music, sports and awards shows. Superstars frequently choose the venue as the starting point of their Asian tours.

The 1800-seat, multi-purpose Venetian Theatre is one of the most luxurious entertainment venues in greater China. Featuring ushers in black-tie, champagne service, gourmet food and beverage items and other unique, premium amenities, it offers an intimate, luxurious and exclusive venue experience. The Venetian Theatre is playing a key role in bringing the best in international and Chinese entertainment to Macao, with a luxury theatre experience like no other in the region.

The 650-seat Sands Macao Hotel theatre regularly features internationally-renowned singers, performers and artists of the highest calibre. From traditional Chinese-costumed dancers to modern performances, and from singing troupes to contemporary bands, everything from Western rock to Cantonese pop is covered.

Sands China Ltd. is the leading developer, owner and operator of integrated resorts in Macao. The befittingly named Cotai Strip Resorts Macao, situated on reclaimed land between the islands of Coloane and Taipa, is the one destination that provides a stunning array of experiences at the heart of Cotai. Cotai Strip Resorts Macao has transformed a gaming-centric day-trip market into an integrated resort city and international hub for business and leisure travellers.

Comprised of the The Venetian® Macao-Resort-Hotel; The Plaza™ Macao, featuring the Four Seasons Hotel Macao; and Sands® Cotai Central, featuring the world’s largest Conrad, Sheraton, and Holiday Inn hotels, Cotai Strip Resorts Macao is where Asia’s ultimate destination is all within reach.