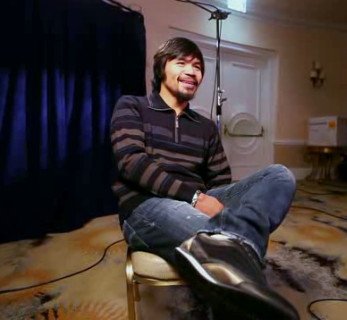 Things have been clear to the clear minded, but if the latest word from Manny Pacquiao won’t untangle “clutters” in the minds of the “wise” and “confused,” what else can?

Pacquiao has long assured he is ready and willing to fight Floyd Mayweather Jr. anytime, anywhere. And just hours ago he told the Manila based Philippine Daily Inquirer: “I’m not desperate to fight Floyd just for the sake of money… I’m not the one seeking this fight rather it’s the boxing fans all over the world.”

The Filipino icon stressed in the same phone conversation with Inquirer: “I am ready to submit myself to any kind of stringent drug testing. Above all, I challenge Mayweather to include in our fight contract that both of us will not receive any single cent out of the fight. We will donate all the proceeds – guaranteed prize, gate receipts, pay-per-view and endorsements – to charities around the world.”

Wow! Can any American superhero beat such dare?

Let me add that Pacquiao’s promoter Bob Arum has already signified his willingness to co-partner with Golden Boy and Mayweather Promotions to make the “mega bout” dream come true this year, with HBO and Showtime working side by side to handle the pay-per-view aspect of the production. Richard Shaefer, for the Golden Boy’s part, has also recently broached a plausible idea of how the grand event can be managed with Top Rank as co-promoter.

Pacquiao is not desperate to fight Mayweather. It is the latter who appears to have turned desperate finding a way to run from the former. Thus Floyd’s option to cherry pick has now narrowed down to Pacquiao and Retirement.

Mayweather’s response or non-response to the latest Pacquiao challenge would put him on the spot for the whole world to know for sure the “answer” and decide what to do next when both of them would end up fighting a different opponent in May or April as a consequence.

Would it be “Mayweather-Khan” or “Pacquao-Bradley” that should be boycotted by the people?

You can’t go wrong with your answer because only the right answer is the right thing to do to solve this seemingly eternal brouhaha, controversies and madness about the “Mayweather vs. Pacquiao.”