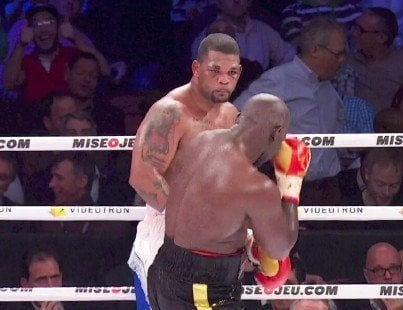 Before a massive crowd of over 20,000 fight fans on Saturday night at the Bell Centre in Montreal, Canada, world ranked and undefeated heavyweight contender Mike “The Rebel” Perez of Cork, Ireland battled France’s Carlos Takam to a ten round majority draw (96-94 Perez, 95-95 x 2).

After winning the first two rounds, Perez suffered a nasty cut over his right eye in the third stanza from an accidental head butt.

“Mike fought well early in the fight but the head butt left him with blurred vision for a couple rounds and seemed to keep from him being able to mount a consistent attack in the second half of the fight,” said Tom Loeffler of K2 Promotions.

“Full credit however must be given to Carlos Takam who was aggressive throughout the fight. He was a very tough challenger with a great record and we congratulate him on his performance.”

About the 28-year-old Perez’s future, Loeffler stated, “Mike’s headed back to Ireland to see his family and we’ll regroup after he recovers from the cut and move forward planning his next fight.”

“There are many more great matchups for Mike in the heavyweight division and we look forward to seeing him compete at the highest level.”

The Perez/Takam clash took place as the co-feature bout to the highly anticipated light heavyweight battle between Canadian rivals Jean Pascal and Lucian Bute and was telecast live on HBO.

Perez was returning to the ring following his November 2nd win over Magomed Abdusalamov at Madison Square Garden.

With Abdusalamov still recovering from injuries suffered during the fight, Perez dedicated the fight to “Mago”, donating a portion of his purse to him and wearing his name on his trunks.