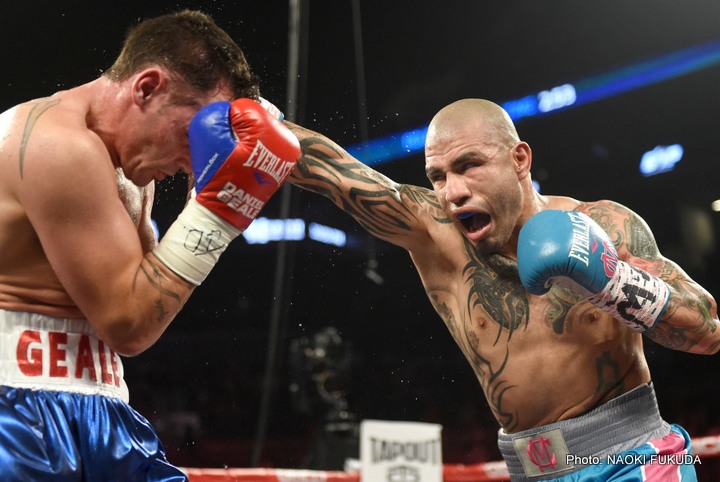 After Miguel Cotto’s dominating and destructive performance against Daniel Geale last night in New York, one man rubbing his hands together was Golden Boy chief Oscar De La Hoya, who has told fighthype.com that he is now fully focused on putting together the ‘super fight’ between the Puerto Rican ace and his fighter – Mexican Box Office draw, Saul ‘Canelo’ Alvarez – a clash that is all but a done deal in principle anyway.

Thankfully for the concerned parties, Geale was unable to take the shine of the mooted clash between the two stars – which would have had taken a hit at least financially should the Australian have pulled off the upset.

“It was great, it was a wonderful performance. It was actually a great performance by Cotto. I felt that he destroyed Geale faster than triple G destroyed him – so that was very impressive.”

“I was thinking (with) Canelo/Cotto being such a fun fight, an action packed fight – so it’s gonna be a fun promotion, a fun fight to make and that’s what the fans wanna see.”

There has also been the bizarre talk of a possible De La Hoya comeback over the last few days – something it’s not worth paying too much attention to – and the “Golden Boy” himself appeared to pour cold water on that gossip also.

Asked about it, Oscar didn’t appear keen to talk about the idea, saying rather dismissively;

“No, I haven’t said anything (about confirming it) yet, (but) I think about it everyday, so?”

Pressed if he’d dive into a big fight as opposed to a ‘soft’ warm up type bout, the 42 year old former champ said;

“I’m not all about small fights, I’m all about always fighting the very best.”

Mmmmm. Not sure about that.

Keep busy with Canelo, Oscar and avoid a return unless it’s a showcase bout for charity for instance. I just can’t see any good coming from it – but Cotto v Canelo ?