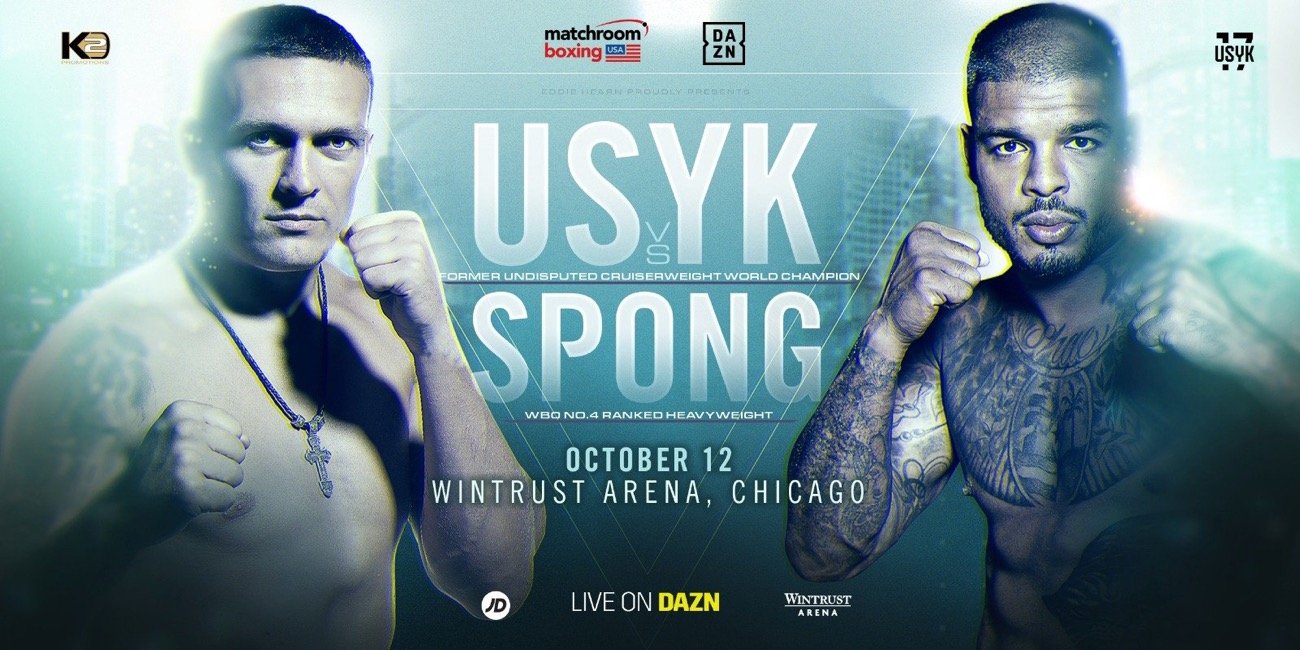 Oleksandr Usyk will face Tyrone Spong on his Heavyweight debut at the Wintrust Arena in Chicago on October 12, live on DAZN in the US and on Sky Sports in the UK.

TICKETS ARE ON SALE NOW FROM JUST $40!

Usyk (16-0 12 KOs) joins the big guns having dominated the Cruiserweight division, leaving the 200lbs scene as the undisputed champion after knocking out Tony Bellew in Manchester in November, his first fight in a multi-fight deal with Eddie Hearn’s Matchroom Boxing USA.

That win for the Ukrainian 2012 Olympic king was a remarkable fourth in a row in hostile territory having won the first Cruiserweight installment of the World Boxing Super Series by beating Marco Huck, Mairis Breidis and Murat Gassiev in their backyards, unifying the division in two of those fights to lead to his clinical win in England.

Now the pound-for-pound master will look to translate his incredible success into glory at the Heavyweight division, but faces a stiff examination of those goals in the form of Spong (14-0 13 KOs).

The 33 year old Florida-based contender can make a huge statement in the Windy City and risks his #4 rating with the WBO to take on Usyk. The Surinamese-Dutchman was taken the distance for the first time in Suriname where he successfully defended his WBO and WBC Latino titles against Ytalo Perea in December, and comes into the bout on the back of a 13th KO win from 14 fights with a second round victory in Mexico on Saturday.

Spong joined the sweet science after leaving a stellar kickboxing career behind, winning 91 of his 100 bouts in a 13-year career littered with accolades and titles before officially retiring from kickboxing in April 2016 after his last bout in December 2014, turning pro in the boxing ring in March 2015.

Usyk’s status as the former long-reigning WBO king means he is the mandatory challenger for that title that Andy Ruiz Jr sensationally ripped from Anthony Joshua in New York in December along with the IBF and WBA straps, so the stakes are high for both Usyk and Spong ahead of the Ruiz Jr-Joshua rematch in December.

“I am very excited to make my Heavyweight debut in Chicago on October 12, live on DAZN,” said Usyk. “Spong is a fast and powerful Heavyweight who has had much success in the ring. I must come through this test to challenge for the World Heavyweight title I look forward to seeing everyone there.”

“After achieving most of my goals as a kick boxer and becoming one of the most decorated champions in the history of the sport, I wanted to test myself in the difficult and challenging sport of boxing. I have worked tirelessly during the last three years and now have the opportunity to prove my worth as a boxer against perhaps the best pound for pound, and most technically sound boxer in the World. Some may think the challenge may be too difficult, but I believe in myself, and look forward to being victorious on October 12.”

“Usyk’s Heavyweight debut is one of the most hotly anticipated boxing moments of 2019 and personally, I can’t wait to see it,” said Hearn. “Oleksandr is a phenomenon who dominated the Cruiserweight division becoming undisputed after just 15 fights. Now, as he prepares to challenge for the World Heavyweight title, he must first overcome Tyrone Spong in Chicago. Spong will be explosive and dangerous and we expect an electric heavyweight battle at the Wintrust Arena, live on DAZN.”

Tickets are on sale now for Usyk vs. Spong, with a stacked undercard to be released imminently. Tickets start at just $40 plus booking fees at: https://www.ticketmaster.com