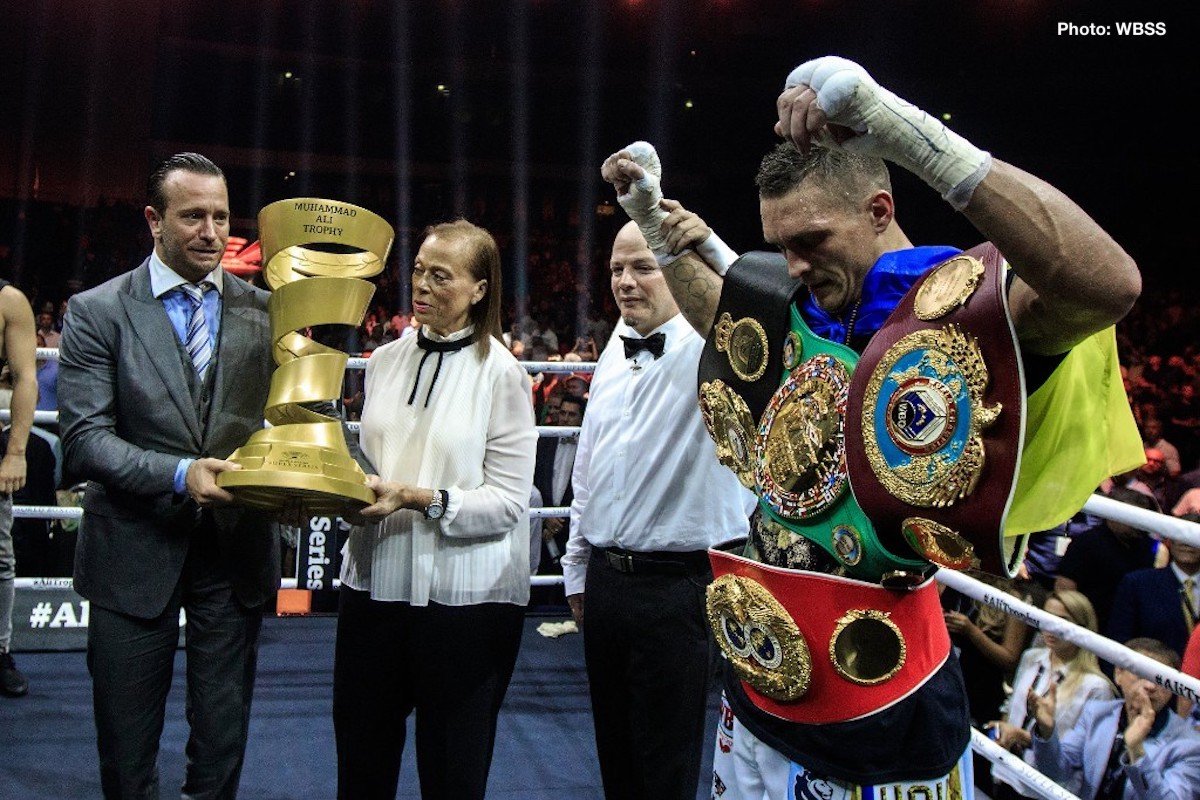 The pound-for-pound star will team up with Matchroom Boxing alongside K2 Promotions with his next fight to be shown live on streaming giant DAZN and Sky Sports.

Ukrainian Cruiserweight king Usyk took the WBO and WBC belts into the World Boxing Super Series final against Murat Gassiev in July, where a 12-round masterclass earned him the IBF, WBA and Ring Magazine belts too.

In comprehensively outclassing Gassiev, the London 2012 Olympic gold medallist created history by becoming the first man in the Cruiserweight division to hold all four recognised World titles at one time.

After his sensational performance against Gassiev, Usyk called out former WBC Champion Tony Bellew and is hopeful of defending all of his belts against the Liverpudlian in a blockbuster showdown in the UK later this year.

Southpaw Usyk has also spoken of his desire to storm the Heavyweight division after tearing through the professional ranks, winning all 15 fights since turning over in 2013, and has touted Heavyweight king Anthony Joshua as a possible future opponent.

“I’m thrilled that K2 Promotions will be working with Matchroom Boxing moving forward to secure me the biggest fights out there,” said Usyk. “Fans can look forward to watching me take on the biggest and best names in the sport. Boxing for me is all about drama and victory, and there is plenty more to come. A fight with Tony Bellew would be a momentous occasion, he is a good boxer and a good person and I also have the option to move into the heavyweight division.

“Thankfully, England is more than just a country for me, in this country I got what I was reaching for half of my life, I got my Olympic gold medal and in Liverpool I became European Champion in 2008. England is a lucky country for me and fortune comes only with hard work.”

“I’m delighted to be working with Oleksandr Usyk and K2 in bringing a pound-for-pound star to the Matchroom team,” said Eddie Hearn. “Usyk holds all the cards at Cruiserweight and is already eyeing a move to Heavyweight and in particular a fight with Anthony Joshua. Right now our priority is to try and finalise a super fight with Tony Bellew later this year but either way we will announce his next fight in the very near future which will come to you live on DAZN and Sky Sports.”

Alex Krassyuk of K2 Promotions said:“I am delighted to start our cooperation with Matchroom Boxing and Eddie Hearn in particular whom I consider to be the most successful promoter of the present time”

“In his 15 fights to date, he has created history by becoming the first Cruiserweight to unify all four belts and there is more history to be made. He knows that in order to become the king of World boxing, he will have to dethrone the biggest name in boxing Anthony Joshua.

“But this is for the future. For now, a Cruiserweight showdown with Tony Bellew is our focus. We are hoping the deal will be finalized shortly and the fight will be announced soon.”

The unbeaten Super-Featherweight talent turned in arguably the performance of his career in June when he halted Declan Geraghty over nine brutal rounds in Belfast to retain his IBF Intercontinental title.

“I feel the World title shot has been coming a long time,” said Carroll. “In my head, Tevin Farmer and James Tennyson are just fighting for my belt anyway. It’s already mine.

“If I fought Tennyson, I’d play with him. The same goes for Farmer, who’d get stopped as well. They’re both chinny and like I said, in my mind that belt they’re fighting for already belongs to me.

“I’m very happy to sign with Matchroom. This couldn’t come at a better time. Anyone who watched the Declan Geraghty fight and heard all the hype about it says I made that night.

“That was a high-profile fight. Deco is a very good fighter but I still put him away in good style. That performance definitely helped but this sort of move has been coming for a long time before that.

“I need more big fights and they’ve been coming ever since I’ve been with MTK Global. Now I’m with Matchroom, there’ll be more and more.”

“I’m delighted to welcome Jono to the team, it’s going be a lot of fun,” said Eddie Hearn.

“I watched Jono win Prizefighter and I’ve been very impressed with his recent rise and he is now on the verge of challenging for a World title. Next up will be a final eliminator for the winner of Farmer vs. Tennyson and I believe UK fans on Sky and US fans on DAZN are going to love getting to know Jono Carroll.”