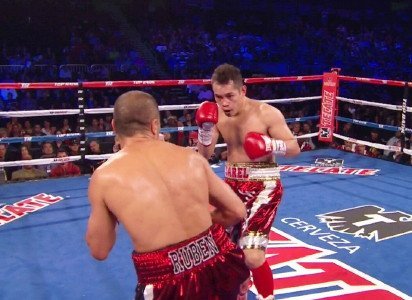 A very cocky Darchinyan was making his seventh defense of his International Boxing Federation championship and had been on an impressive run knocking out all in his path minus one exception. That exception was Glenn Donaire, the older brother of Nonito, who lost a technical decision after an accidental foul resulted in a broken jaw. Heading into this fight it did not appear that Nonito was going to bring anything into this fight that was going to stop the blossoming Darchinyan from continuing his drive toward the larger stardom of boxing as he was hyped to be capable of. Five dominant rounds and a thunderous left hook recognized by RING Magazine as the Knockout and Upset of the Year started Donaire toward his path to pound for pound status that would peak in 2012. For Vic Darchinyan he never quite regained what he lost that night.

The six year interval created a much more interesting fight than their first meeting with a finish just as dramatic. Heading into this long overdue and for many an unnecessary forgone conclusion it appeared that Nonito Donaire, like the first fight, would be too fast and too sharp for Darchinyan. Well the unorthodox Darchinyan fought a very intelligent and patient fight and reaped the rewards through eight rounds. Donaire was youthful and sharp at flyweight at the age of twenty five back when they first met, at the age of thirty and carrying fourteen more pounds he did not have the same vigor. Darchinyan to his credit also did not come storming at the young Filipino Flash this time but posed and waited to strike. The first round was a very cautious round in which both men exhibited large amounts of respect for each man’s power. Then the nerves were broken by a solid left hand by Darchinyan at the close of the opening round which showed just how dangerous he still could be.

The second round was another very patient round as Darchinyan, known as the “Raging Bull”, did not storm forward but remained in a tight defensive position. Donaire was winning the round on activity and the right hand, not the patented left hook, a right hand momentarily rocked Darchinyan and it appeared that now the class would show. Well the tough Armenian veteran was not in Corpus Christi, Texas to go quietly and landed three clubbing left hands of his own to finish the round. Unlike the first fight it was apparent that Darchinyan was better prepared for what Donaire had to offer. He had six years to prepare himself for the rematch and now knew more about his opponent than he did during the first meeting where no one expected Donaire to perform at the level he did in scoring the dramatic upset. This time Darchinyan was patient and did not play into Donaire’s hands.

Round three was even slower than the two preceding rounds which in their own respect were rather slow to begin with. It was apparent that Darchinyan was going to be hanging around a lot longer than the first fight and was going to make Donaire work much harder to get what he wanted in there. Though he did land one of his signature left hooks in the round, he was less effective and less active and still got hit by another solid left. As the three rounds had passed it became an interesting thought as to if Darchinyan had taken a page directly out of Rigondeaux’s handbook by being patient and focusing on the left hand. Yes Darchinyan has been a left hand happy sort of fighter not relying on the right much outside of a rangefinder but he most certainly borrowed that patient approach.
It is hard to gauge to what degree the strategy effected Donaire in comparison to the age and weight. Donaire did not look superb carrying the weight and he was not the lightening quick mover that he has shown in the past. The slight drop in speed and activity allowed Darchinyan the kind of success he did not have the first time as now he was able to compete with the physical gifts of Donaire. However, the strategy and approach was just as important. Can it be said that Donaire does not excel when his opponents do not come right after him. He has lived and thrived as a counterpuncher and knocked out Darchinyan charging in, knocked out Jorge Arce who was so willing to trade and Fernando Montiel was brutally knocked out by a destructive left hook counter. On the other hand, his fortunes faded when paired off with guys who played defense. Omar Narvaez, Toshiaki Nishioka, and the already focused on Guillermo Rigondeaux puzzled Donaire. Yes Nonito won two of those fights and yes one by a crushing knockout and one by a dominant decision but he did not dazzle in either match. Both men showed him a defensive position and he did not know how to attack it. In fact he did not knock Nishioka out until Nishioka began to really gamble in there and take the risks.

Guillermo Rigondeaux lulled him to sleep in there and drove his punch output way down. Then in the twelfth round Rigondeaux really began to fire away with lefts as Donaire appeared bothered and covered up the majority of the round when everyone in the building knew he had to get desperate. This trouble with attacking plagued him mightily last night against Darchinyan who stayed low in his crab like defense and was content like Rigondeaux to fire the occasional left. Donaire’s offense had been so stymied by this posture and power threat that his offense was none existent in some rounds like the seventh where he really had nothing offensively and to a degree the eighth. Donaire’s facial expressions later in the fight showed that of being confused to maybe even unsure but he most certainly did not show a look of confidence as his corner was in a panic. Many voices were telling him to get busier and to pour it on.

Nonito Donaire to his credit landed the solid bomb in the ninth round. The left hook that started the end was executed almost identically to the punch that turned the lights out six years ago. He caught Darchinyan lunging in with his right just low enough for that monstrous left hook. Earlier in the fight, the third round, Donaire did catch an overextended Darchinyan with a similar left hook but it did not have the same result. Maybe Donaire’s plan was to look for that punch all night as it won him the fight the first time and paid off again. What can be said is that Donaire did not look as good doing it this time. Has become drunk with his power or just lost step at this stage. The HBO commentary did accuse him of maybe not having his head all the way in the game anymore. He still has the power and the eyes and reflexes of a counter puncher but if he continues to show up this lackluster he may find another loss on his record.

As announced by the commentary Donaire was down on two cards six rounds to two after eight by judges Levi Martinez and Oren Shellenburger. HBO unofficial scorer Steve Weisfeld had it much closer as did the commentary team which admitted and stated how tough of a fight it was to score. I myself had it an even fight but could have gone either way as Donaire was definitely busier but not busy enough where the big punches of Darchinyan could swing a round he lost statistically. Vic Darchinyan fought a very intelligent fight and shocked a lot of people with the effort and resistance he put up when he was not given much of a chance. Nonito Donaire should really go back to the drawing board and work on some of these flaws. The funny thing is that even in a fight where he mentally does not look right and physically appears a little off he has the gifts and know how to get it done in the clutch. A fight with Chris John or Jhonny Gonzalez would be interesting matchups and ones that a diminished Nonito Donaire would still be favored in.