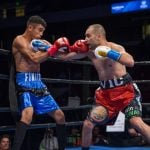 A press conference in Manila on Tuesday announced the details of Featherweight Fury – a championship event with three featherweight world title main event fights to be hosted by The Venetian® Macao on Saturday, May 31 at the Cotai Arena. A very cocky Darchinyan was making his seventh defense of his International Boxing Federation championship and had been on an impressive run knocking out all in his path minus one exception. That exception was Glenn Donaire, the older brother of Nonito, who lost a technical decision after an accidental foul resulted in a broken jaw. Heading into this fight it did not appear that Nonito was going to bring anything into this fight that was going to stop the blossoming Darchinyan from continuing his drive toward the larger stardom of boxing as he was hyped to be capable of.