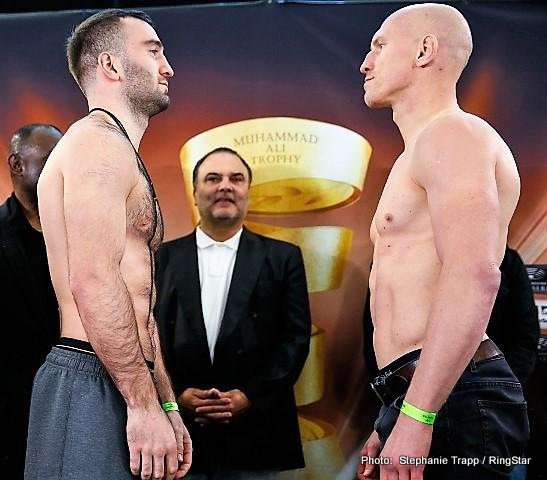 Russia’s unbeaten cruiserweight star Murat Gassiev is in action tonight – he will face former 200-pound champ Krzysztof Wlodarczyk in the WBSS tournament – but the reigning IBF champ has bigger goals than merely winning the tournament.

Gassiev, 24-0(17) and trained by Abel Sanchez, tells RT Sports how he aims to win the WBSS, unify the cruiserweight division and then make the move up to heavyweight. It’s still early days, and Gassiev could have his hands full against the tough and experienced Wlodarczyk in New Jersey tonight, even if he is favoured to win, but Gassiev might just have the tools and the talent to achieve his goals.

Having beaten Denis Lebedev to win the IBF belt back in December (Gassiev is unhappy to have endured such an inactive spell since) 24 year old Gassiev has already been called “the new Gennady Golovkin” by some (Sanchez of course being the trainer of both men) and he would certainly emerge as the best cruiserweight out there today should he win the WBSS – and step-one comes tonight against Wlodarczyk.

“I don’t have a fight for these ten months but we do a lot of work and I show this work on Saturday,” Gassiev said to RT earlier this week. “First of all I want to be unified champion in [the] cruiserweight division and after, I want to move up to [the] heavyweight division. [Right now] I think only about this tournament, and after we will see what happens.”

Currently one of the most competitive weight divisions in boxing, the cruiserweight division, and the WBSS tournament, boasts the likes of Oleksandr Usyk, Yunier Dorticos, Mairis Breidis and Gassiev. Who will emerge with the illustrious Muhammad Ali trophy, and if it is Gassiev, can he then move up and be a real force at heavyweight? At a shade below 6’4,” Gassiev is tall enough so who knows, maybe he can join the small group of cruiserweight champions who were able to rule at heavyweight also.

But first comes Wlodarczyk, 53-3-1(37). The former champ is now 36 and the Pole has had a long and at times hard career, but he may have one last great fight in him. If so, maybe “Diablo” will ruin all of Gassiev’s lofty plans.