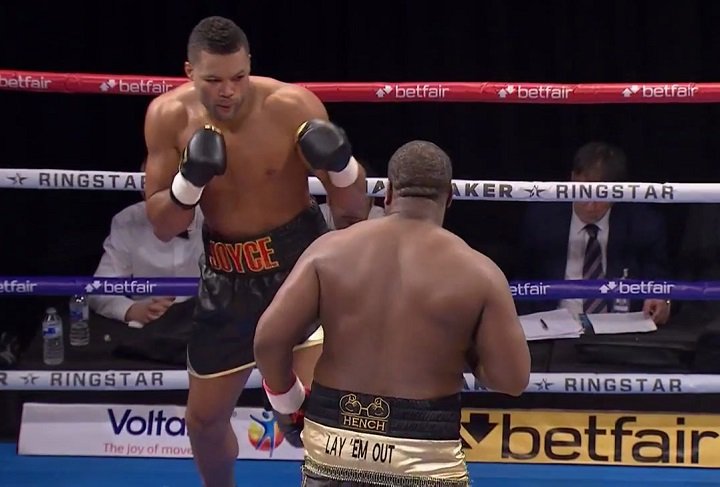 Tonight in London on David Haye’s Hayemaker Promotions card at The O2, 2016 Olympic silver medal winner Joe Joyce made his pro debut a successful one, the red-hot heavyweight prospect taking on and halting experienced 16-fight pro Ian Lewison in a scheduled ten rounder. The end came at the 2.35 mark of round-eight, as a battered Lewison was pulled out by his corner when under fire.

32 year old Joyce, standing 6’6,” was under a degree of pressure in the early going, Lewison chucking some hard overhand rights in the first and letting his hands go in the second. But Joyce, trained by Cuban Ismael Salas, got his stiff left jab going and he used his greater speed to stick the advancing Lewison to head and body.

An enjoyable fight fought at a decent pace, tonight’s battle was competitive for a while, before the four-year younger man took over in the third; Joyce working Lewison over on the ropes. Looking hefty, Lewison was tired by now, his gas tank rapidly emptying. Then, in the fourth, everything went wrong for Lewison.

A left hand caught the older man and Lewison was clearly in distress, dabbing at his right eye for the remainder of the round. Taking a sustained hammering for around two full minutes, Lewison then appeared to twist his ankle at the very end of the session. His swollen right eye eye examined by the ringside official at the start of the fifth, Lewison battled on as best he could. Joyce, though, was in total command now and it seemed to be nothing but a matter of time.

Lewison was still letting his hands go in the sixth, looking to get lucky by landing a bomb, but he was off-balance and stumbling and Joyce was never seriously troubled. Joyce showed good composure, boxing well in the seventh as the gritty Lewison trudged forward. Some critics may say Joyce should have stepped up the pace in a real effort to take Lewison out before the one-sided fight had reached this stage, but he clearly wanted to make no mistakes in his debut, such as getting tagged by a lucky shot.

Finally, in the eighth, Joyce cracked Lewison with a left to the head, his follow-up attack forcing Lewison’s corner to throw in the white towel. Now 1-0(1) Joyce showed plenty of good things tonight and his promising career will be followed with great interest. Some eyebrows were raised when Joyce was matched with the now 12-4-1(8) Lewison in his very first pro fight, but he showed tonight that the match-making was sound enough.