In an upset, light welterweight Steve Spark (16-2, 14 KOs) beat a frustrated Montana Love (18-1-1, 9 KOs) by a sixth round disqualification on Saturday night in the main event at the Rocket Mortgage FieldHouse in Cleveland, Ohio.

Love appeared to lose his cool after suffering a cut over his left eye from a clash of heads in the sixth and then charged Sparks like a bull and shoved him out of the ring, causing him to call and land on his feet on the concrete. 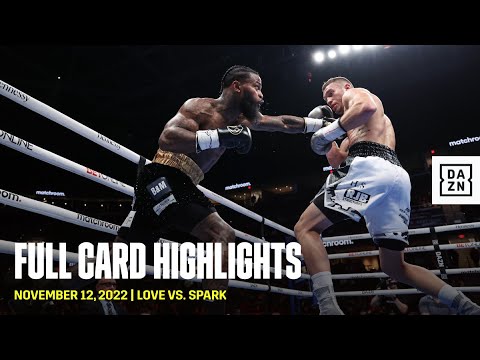 Although Love denied doing it intentionally, it looked very much intentional on his part in shoving Sparks out of the ring.

At the end of the eighth round, Alamo’s corner decided he’d had enough and halted the fight. After the fight, Hitchins let the DAZN interviewer know that he wants Montana Love next.

Ford caught Lukas with a beautiful right hook that put him down on his back. The match was then halted on the spot by the referee. The time of the stoppage was at 2:20 of the eighth.

In the second route, Mattice caught Tapia with a big shot, putting him down on the canvas. In the third, Mattice continued to punish Tapia with big shots that had him on the verge of going down again. In the seventh, Mattice once again hurt Tapia but couldn’t finish him.

Female super featherweight prospect Beatriz Ferreira (1-0) beat Tanya Cardoso (5-1, 1 KO) by a four round unanimous decision. Ferreira knocked the game but limited Cardoso down in the first and third rounds. The scores were 40-34, 40-34, and 40-34.

Junior middleweight Nikoloz Sekhniashvili (8-1, 6 KOs) stopped David Rodriguez (6-1, 2 KOs) by a third round knockout. The ringside doctor advised that the one-sided fight be stopped in the third.

If the 27-year-old Love doesn’t impress tonight, it’ll be interesting to see if Matchroom Boxing continued to let him headline their cards.

“He’ll get it because that’s what it is with guys with talent. They take it for granted, especially when they’re young and have so much flair, so much ability like Montana Love” said Sergio Mora to DAZN’s JABs about Montana Love being able to turn things around with his career following consecutive poor performances.

“I just think his last two fights are veterans. They were good fighters. Not top fighters, but they had good records. They weren’t losers. They were still winning. 88 wins, five losses.

“That’s a really good percentage of wins against losses in your last four opponents. I’m giving Montana Love credit, and he does it with pizzazz. So the eyes are on him.

“The thing about boxing is people have short-term memories. One big performance. If he sparks out Spark in his next fight, he’s back, him and ‘Poppy,’ his little Bulldog. All eyes are on them again.

“That’s the thing about boxing. You’re one knockout away from being back on top. Montana Love has a chance to do that coming up,” said Mora.

“Yeah, but didn’t you expect more from Montana Love?” said Chris Mannix. “Maybe it’s the fact that he went up against an Ivan Baranchyk, who just goes out there winging punches and is kind of perfect to get countered in the way that Montana Love countered and knocked him out.

“I just had higher expectations. Montana Love was a guy who was a sought-after commodity after that Baranchyk win. You had PBC going after him.

“You had Eddie Hearn going after him. He eventually signed with Matchroom, and there was a lot of thought that in a couple of years, he would be able to get himself a world title fight. He might still be because those belts are fragmented, but I just expected a little bit more.”

Montana Love (18-0-1, 9 KOs) is facing a big puncher tonight in Steve Spark (15-2, 14 KOs) in their scheduled 12 round fight in light welterweight action at the Rocket Mortgage FieldHouse in Cleveland, Ohio.