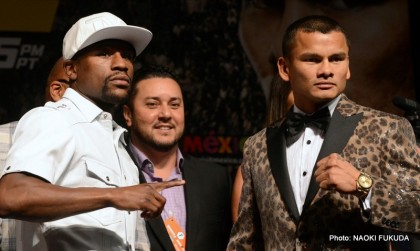 Rematches may lack some of the drama and anticipation of other fights. They make up for it in predictability.

While you can learn from any of these, none can teach you as much as watching a previous fight against the same opponent. Instead of speculating as to how this boxer will fare against that puncher, or how a three inch reach advantage will win or lose against superior hand speed, you ask one question: What happened last time?

I’ve never spent that much time watching old fights just so I can publish a prediction–I do it to win money…and to avoid horrible mistakes that lose me money.*

Any prediction is just a side benefit of the process of trying to invest in these fighters.

It’s fair to say I think Floyd Mayweather Jr. will beat Marcos Maidana. Unfortunately, Mayweather is a 1/9 favorite, so to win a decent amount on the champ requires you to risk uncomfortably massive sums. Even if you remain convinced that Mayweather will win, Maidana’s 31 KOs in 39 fights should at least concede him a puncher’s chance.

If you rate that chance at better than 6/1, go ahead and bet Maidana.

As Mayweather is the superior boxer, it is fair to expect that Maidana will need a knockout to win. While I am inclined to agree with this, the fact that one judge scored the last fight a draw shows that we cannot completely eliminate the possibility of Maidana winning by decision, as unlikely as it may seem. His work rate gives him the possibility of stealing any given round, as long as Mayweather fights defensively and keeps a low punch count.