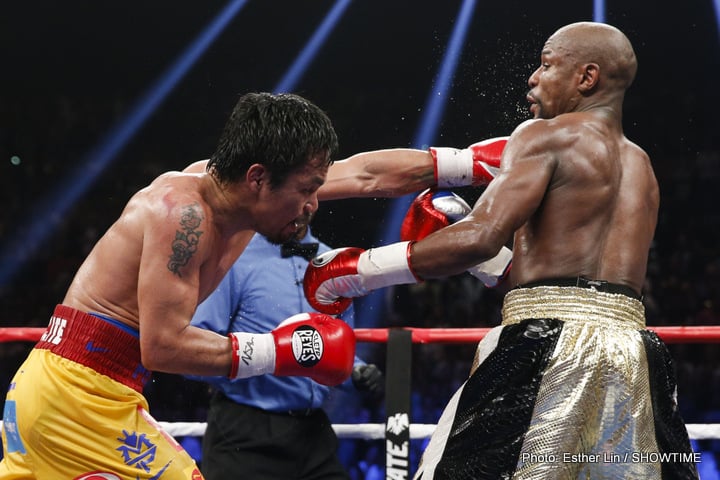 Is Floyd’s legacy tarnished by the fact that in the so called biggest fight of his career the question remains, did he beat an impaired fighter? Was Manny correct when he said Money didn’t do anything? Manny claimed all Floyd did was run, and that he was never hurt by him. Was an incredulous Max Kellerman correct in reminding Manny that he should have known what he would be faced with (Floyd running), and didn’t he have a plan to deal with it?

Should Manny have checked “Yes” on the NSAC (Nevada State Athletic Commission) pre-fight questionnaire? In not doing so, was he negligent? Or, was he courageous and admirable? Should NSAC have authorized a shot of Taradol (pain killer)? Or, in the post-fight interview, should Manny have just kept his mouth shut and suffered in silence? Has Manny’s reputation been damaged beyond repair?

If the NSAC deems him to have been negligent in not completing their form honestly, is Manny deserving of a fine and/or suspension? If so, how long and how much? Do plaintiffs in numerous lawsuits that are attempting to bring a class action suit against Manny and others for monetary damages have a case? Do they have a prayer? Michael Koncz, advisor to Manny, thinks not. He says fault rests with him. He claims to have been the one who checked the wrong box. He dismisses it as just a clerical error. Do you believe him? Do you agree with him? Will a judge or jury?

Many fans don’t want either fighter to retire, and some want to see a rematch. Will it happen? Should it happen? Why? Before that can happen, Manny has to heal and Floyd has to fulfill his obligation to Showtime for a sixth fight. Who will be his opponent? Regardless who he picks, will fans be satisfied with his selection? Will Money be satisfied with 49-0-0? Should comparisons be made with Rocky Marciano’s record? After all Rocky was a heavyweight, and aren’t there many fighters in lighter weight classes who had longer unbeaten streaks than forty-nine and zero? For a little perspective concerning greatness, consider that Willie “Will o’ the Wisp” Pep had 229 wins. Archie Moore had 131 knockouts. What’s that do to your POV? How about this for a final question: When is enough money enough before it becomes money-grubbing affluenza?