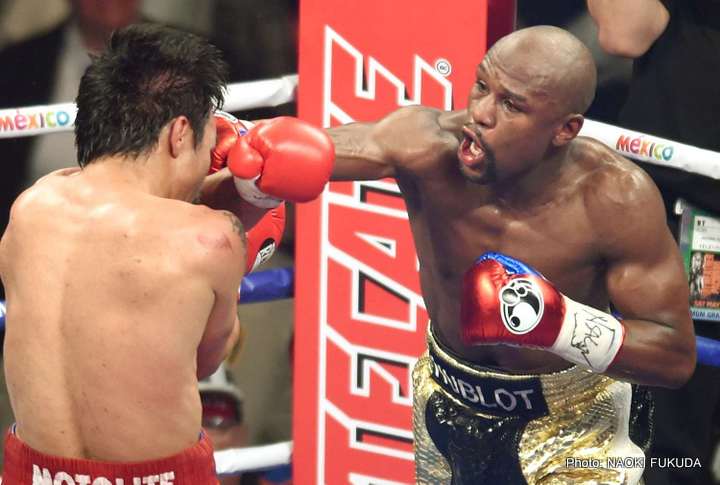 A lot was made of Pacquiao’s right shoulder, something that the unimaginative media has labeled as “Shouldergate”. Watergate had nothing to do with water. When I initially watched the fight I didn’t notice anything unusual, so on the replay I paid particular attention to Pacquiao’s use of the right hand, the jabs and hooks from his southpaw stance. From round one to round twelve Pacquiao did not appear to be any more hesitant to use his right hand than his left. What I did see what a tactical fighter who was looking to create openings rather than to recklessly jump in winging wild punches. In other words, I saw the same Manny Pacquaio that I have been seeing for the last several years; the only difference was that with this particular opponent he was having trouble finding and creating openings, and that led to a reduced punch output with either hand. Saying that Manny’s right shoulder is the reason he lost the fight is like saying that under inflated balls are the reason the New England Patriots won the super bowl. It is absolute nonsense. We now know for a fact that he did tear his rotator cuff, and I have no doubt that he was in discomfort. What I did not see was a “one handed fighter” or a boxer who appeared in any way hesitant to use his right arm repeatedly for the entire length of the contest.

Saul Alvarez’s knockout of James Kirkland was breathtaking. It was even more thrilling in slow motion. I watched it over and over again. It was a great knockout. It was not, however, a great fight. It was a fun fight, an exciting fight, and it produced an early candidate for KO of the year. It wasn’t the fight that, to paraphrase Jim Lamply, “took away the stench of Mayweather vs Pacquiao”. That assumes two untrue things; firstly that MayPac stunk, which it did not. Second that HBO was the only network bringing us fights that weekend, which couldn’t be further from the truth. Amir Mansour and Joey Dawejko gave us a fun, spirited, albeit bloody battle on ESPN’s Friday night fights. Top Rank’s card on TRU TV (which I didn’t realize I had until Friday night) delivered a mild upset when hometown hero Glen Tapia showed that the Kirkland loss was no fluke by getting KO’ed by French fighter Michel Soro. Premier Boxing Champions offered up a surprisingly excellent card on CBS with two closely contested battles. First Jamie McDonnell battled back from an early knockdown to retain his title in a close, but well deserved decision over previously unbeaten Tomoki Kameda.

Next, Omar Figueroa and Ricky Burns fought toe to toe for twelve full rounds. It was a closely contested fight despite the wide scorecards in Figueora’s favor. That is just a sampling of what was a boxing packed weekend which featured the wide variety of styles that boxing has to offer, from one sided tactical affairs, to brutal KOs and everything in between. All are entertaining in their own way. To use the baseball analogy, as fun as it is to see a ball game filled with home runs, I find a tension filled pitchers dual can offer just as much entertainment value. There is no doubt that Canello vs Kirkland was a more fun filled and action packed fight than Mayweather vs Pacquiao, but whether it was truly a better fight is a matter of opinion. Was it contested at a higher level of skill? Did it have the ebbs and flows to hold the viewer in suspense? After the first knockdown it seemed to be just a matter of time. I am sure if you charged people $100 to see it at least some of them would complain that it was too short.

Certainly It will be good for Canello’s reputation, and further establish him as “must see TV” among boxing fans. Whether it solidified his place as heir apparent to the PPV crown, or will even further his crossover appeal, remains to be seen.