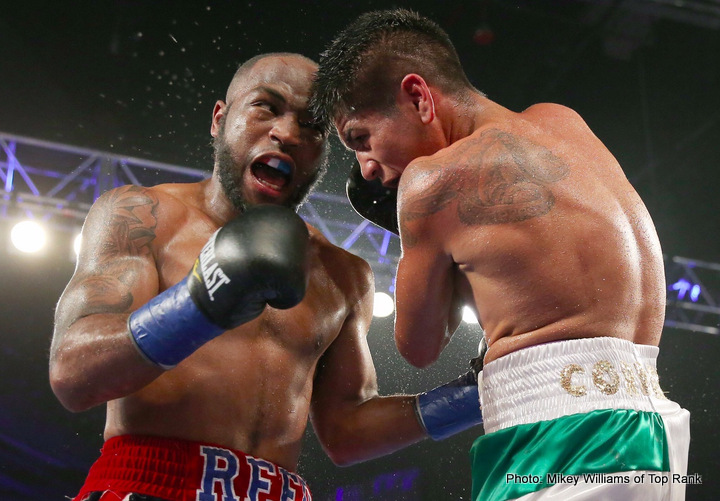 OnJune 11, 2016, Junior Welterweight prospect Mike “Yes Indeed” Reed (19-0, 11 KOs)earned one of the biggest wins of his career by dispatching of Abraham Cordero (13-3, 7 KOs) by technical knockout after beating the game Mexican fighter over 6 lopsided rounds at Madison Square Garden (MSG) in New York.

The bout, showcased onthe Martinez vs. Lomachenko undercard, was a statement fight for Reed, who downed Cordero in the first round before stopping his foefive rounds later. The knockout loss was the first of Cordero’s pro career.

Indeed, things continue to look up for Reed who has reeled off three knockouts in his last four fights.

And while the search for Reed’s next opponent continues, the 23-year-old DC nativetook time out of his schedule to hold an exclusive telephone interview with East Side Boxing’s Paul “Paparazzi” Jones. Here is what Mike Reed had to saywhen he reflected on his fight with Cordero, potential opponents, and more:

Eastsideboxing.com (ESB): Can you take us back to your June 11th fight at MSG against Cordero and walk us through your game plan going in?

Mike “Yes Indeed” Reed (MR):Going into the fight. . . [w]e only saw about two videos on him and it was hard to tell whether or not he was really tall.  But, he had long arms. So the game plan was to get on the inside and work. And I think that’s what we did.

ESB: You had Cordero hurt in Round 1 with only the ropes and bell saving him from hitting the canvas. At that point, could you sense that the fight wasn’t going to the scorecards?

MR:Actually, yeah. I believe that he would have fell if the ropes wouldn’t have held him up and I didn’t think he was going to beat the count looking back at the fight.  But the referee called it a knockdown and gave [Cordero] a standing eight count.  But once I knew that I could hurt him, it was only a matter of time before I began to just break him down.

However, [Cordero] did do a nice job of slowing me down. He jabbed well and gave me a little resistance.  But I did know that, after round one, I was going to get the knockout.

ESB: It seemed thatCordero tried to change his strategy mid-fight by trying to boxing more and establishhis jab. How you were able to neutralize his height and 5½”-reach advantage and impose your will on himafter his style change?

MR:I’ve always been a shorter fighter with shorter arms, so I just kind of used my jab.  [Cordero], being a southpaw, it was kind of weird because I’m a southpaw as well. But, like I said, I started to jab to his body and mix up my jab showing him that a short man can jab as well.

My corner [also] did a great job of giving me my instructions and they said I was head-hunting a little bit.  Because I knew I could hurt him, I just wanted to get the knockout. But my corner sat me down and said, “Michael, calm down. Go to his body.  [The knockout] will come to the body because he’s getting used to you hitting him in the head.”

So, my corner gave me excellent instructions and I just followed the game plan.

ESB: All things considered, how did you grade your performance vs. Cordero?

MR:I grade myself a C+. I think I did get hit a little too much in that fight. But I did do some things good, like I did pretty well with my jab considering he was a southpaw with a long reach.

We still have some things that we need to work on and we’ll be good.

ESB: Speaking of knockouts, you’ve been a man on fire in your last four bouts winning three by knockout and one by shutout.What do you attribute these results to?

MR:It’s a combination of everything.  I think the more rounds I get, the more the knockouts will come because even in the amateurs, I’ve always been a guy that comes on late.  I lost a couple of fights in the amateurs just by running out of time. So with me fighting eight rounds, I have enough time to break guys down.

Also, we’ve been focusing a lot more on my power and my accuracy, [and] it’s definitely been working.

ESB: While most of your opponents are aware your speed, it seems that they underestimate your power.  Why do you think this is the case?

MR:I think that’s the case because when you look at my knockout ratio, it’s a little above 50% [actually 58%].  So guys don’t automatically see Mike Reed [as] the knockout artist.  And rightfully so, I think they look at me and say they have to worry about [my] speed. But I can switch it up as well.

They always say, “Speed generates power” and that’s what we’ve been doing lately.

ESB: You seemed to add some special effects to your defense against Cordero.  For instance, I saw you using the shoulder roll a lotin that bout and parrying many of his shots.  Is this a new wrinkle that you’ve added or something that you’ve always had in your toolbox?

MR:We’re always trying to better our skill set.  It’s something that I’ve picked up on over the last two or three fights and it’s been working.

ESB: I’m not trying to play matchmaker, but I’ve heard that you’d like to fight someone just below the championship level in your next fight. You mentioned veterans like “Sugar” Ray Beltran (30-7-1, 1ND; 18 KOs) and Hank Lundy (26-6-1; 13 KOs).These are significant step-up fights against guys with experience in world title fights. Is this caliber of fighter on your radar orare you looking to take on a fellow up-and-comer in your next bout?

MR:Either way is cool. Whether it’s an up-and-comer or one of the guys that’s always fell short of a world championship and they’re just looking to knock off a top prospect so they can get back in title contention.

I know they’re world champions and, to the naked eye, if you just walked in the gym you wouldn’t know who’s who. That’s how good the work is.  So I feel as though I am ready for a step up in competition.

ESB: Has Top Rank come to you with any proposals for your next opponent?

MR: No, not at all.  I just know that Top Rank has a good stable of prospects, especially at Junior Welterweight. So I always look at their fights.

They’re good folks, but we fight in the same weight class. And if a name is pulled, we won’t hesitate to fight.

Now that Top Rank and Al Haymon are starting to work together, that opens up doors for me as well in the sense of more opponents.

ESB: You mentioned that you’ve sparred with Adrien Broner. According to a recent piece from ESPN’s Dan Rafael, Broner reportedly priced himself out of a potential fall 2016 fight with Manny Pacquiao. Do you think that’s a missed opportunity for Adrien?

MR:I do because I’m close to Adrien in the sense that if he comes down [to DC] we’ll go hang out. We’ll go bowling and we’ll spar sometimes. Especially when he had a southpaw, I was his main sparring partner for that camp.

I think he’ll make up for the money in a couple of fights because he’s such a draw and his ceiling is so high. But, would you want to take two to three mid-level fights against guys that can actually beat you?

Because we’ve seen Adrien have problems at the welterweight limit,and I think his signature performances came at 140 or 135 pounds, I think he should have took the fight.

I hope Adrien gets [the fight] because itwould be interesting and entertaining. But I think it’s a bad move to price yourself out of that fight.

ESB: You’re a student of the game andgreat at dissecting other fighters’ styles. Of course, I can’t end this interview without getting your predictions on some of the big fights coming up this year. For instance, Terence Crawford (28-0, 20 KOs) vs. Viktor Postol (28-0, 12 KOs)?

MR:I see this fight going like a lot of the recent Terence Crawford fights in the sense that he’s going to have to make adjustments.  You saw when [Terence] fought Hank [Lundy], Hank was having success early on even though the fight ended in the 5th round.  Hank forced Terence to adjust and I think that’s what sets Terence apart from a lot of the guys now.

Viktor will have early success, but around rounds 4 or 5 the tide will turn and Terence will get a 10th or 11th round stoppage from an accumulation of punches.

MR:Oh, that’s a very interesting match-up. Léo with his height gives guys problems, but I think Carl may clip Léo because, a lot of the times, [Léo] won’t use his height.  He’ll use his reach and want to work on the inside with a guy.

If I had to bet, I’d probably go with Léo because he’s a little taller and when things get rocky, he’ll box.But, it’ll be a good fight.

MR:I think it’s a dumb fight! Everybody gave Canelo [Álvarez] crap for taking on Amir Khan and rightfully so. You say, Khan was a big welterweight, he can box and he’s fast. But, he’s a welterweight. That’s what he is.

And people look at Canelo and said he’s not really a 160-pound fighter, but he has the [Middleweight] belt.

I think GGG would have been better off fighting Andre Ward (29-0, 15 KOs). I don’t see why it’s OK for GGG to fight Kell Brook and not Andre Ward.

I take nothing away from Kell and the fight makes sense moneywise. I’ll watch the fight, because I think Kell Brook is one of the fresher guys at 147 and for him to move up to 160, that’s a mountain to climb. But if he beats GGG, that’ll be something to talk about.

It’s a no risk and high reward fight for Brook and the opposite for GGG.

ESB:  Before we finish up, do you have anything to say to your fans in the DC Metro area and beyond?

MR:I just want to say thank you to everyone that continues to support me and helped me get to this point.  Whether it was buying tickets when we were selling [them], buying t-shirts, telling their friends and neighbors about me, [or] people who posted something on Facebook.  Whatever you’ve done to support me, I say thank you because it wasn’t an easy road and it was a big help in my career.

ESB: As always, thanks for your time Mike!