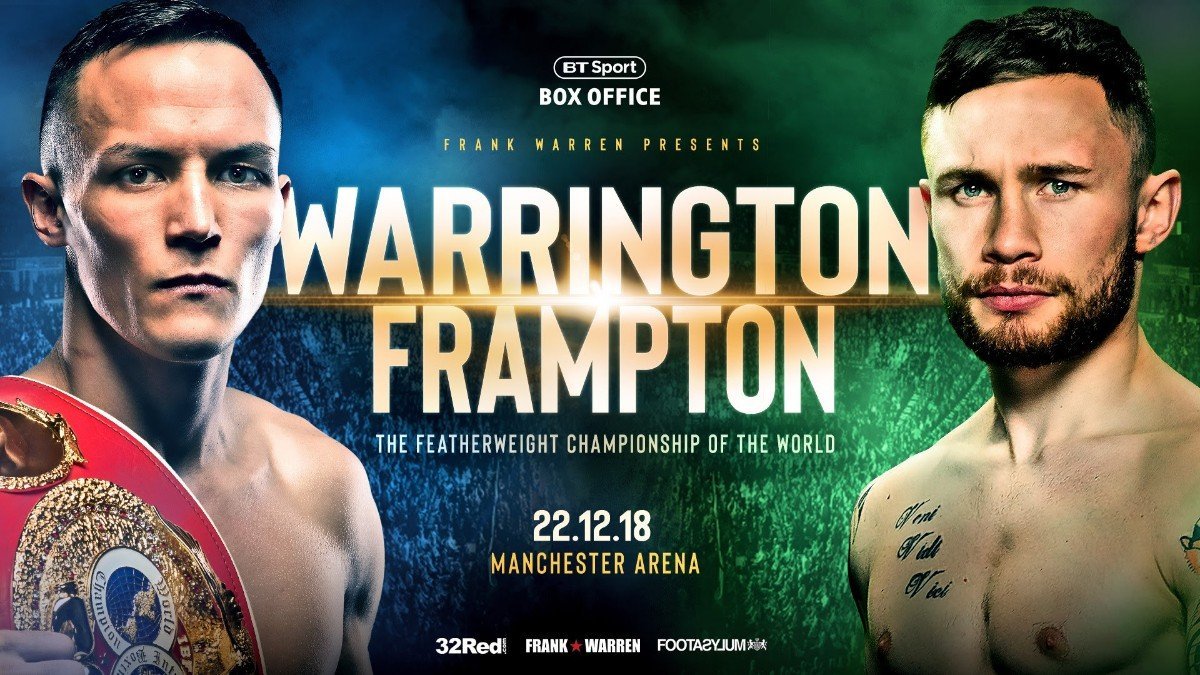 JOSH WARRINGTON REJECTS the notion that his December 22 world title challenger Carl Frampton is back to his best.

The Jackal suffered the first defeat of his career against Leo Santa Cruz in January 2017 after becoming a two-weight world champion with victory over the Mexican in the previous July.

A period of inactivity followed before Frampton launched his bid to become world champion again with wins over Horacio Garcia, Nonito Donaire and Luke Jackson.

He strongly refutes the suggestion that his best years are behind him, but IBF world champion Warrington believes he has hit or is nearing his ‘best before’ date.

“I don’t think so,” responded the 27-year-old to the question of whether his 31-year-old challenger is in his prime years. “We’ll see on the 22nd and obviously he is going to train like a demon. He is going to come in there believing he is back to his best, but he has had a lot going on outside of boxing and had a bit of inactivity after the Santa Cruz fight.

“Alright, he had a short camp for the Horacio Garcia fight, but I don’t think he can take too much away from that. With Donaire he did what he had to do to win and I don’t think Luke Jackson posed too much of a threat.

“Something tells me he is just not the same Carl Frampton as he was.

“Has he lost a little bit of edge? I don’t know, but I do know that I am reaching my peak years.

“Before my last fight (against Lee Selby) I would have thought I would just be happy to win, but I came out of the ring thinking ‘who’s next?’. The fire is burning more than ever in the belly and I’ve worked hard to win this world title.

“Now I’ve got it I want to keep it and finish 2018 as champion with two massive wins. The first at Elland Road making history for the city of Leeds, my kids being born and now this could be the perfect end to my year.”

Josh Warrington confesses he found it ‘satisfying’ when he proved wrong the doubters who wrote off his chances of becoming world champion.

He also added that it will be the same thing again when he defeats Carl Frampton in their BT Sport Box Office clash on December 22nd in Manchester.

After being asked if being the underdog gave him an extra edge in his preparation’s for Frampton, Warrington responded with no hesitation;

“Yes, it’s making me train harder and I want to turn around and stick two fingers up, it was sweetly satisfying after the last fight.”

In his previous fight, domestic rival Lee Selby was a clear favourite heading into the contest against Josh Warrington.

But the Leeds underdog re-wrote the script and stunned the boxing world by out-boxing Selby to a shock victory, claiming the IBF world featherweight title in the process.

“…to be able to after the fight, scroll through my social media when I got home, my world title sat there, cup of tea… you were saying?!” joked the IBF world champion.

He continued: “I think it is nice to turn around, especially when you’re doubted, it wasn’t that a few doubted me, the whole country doubted me who took interest in that fight. Nobody was giving me a round never mind the fight, and the way I went about it, it was a bit sweeter.

“… and I feel like it will be the same with this one [against Frampton].”

The Belfast side of the blockbuster Manchester Arena show headlined by the IBF world featherweight title showdown between Josh Warrington and Carl Frampton has been strengthened by the addition of unbeaten fellow featherweight star Michael Conlan to the bill.

The blue-chip prospect and former world amateur champion will have his tenth professional fight in Manchester, live and exclusive on BT Sport Box Office in the UK.

Conlan said: “I am really excited to be fighting on the same card as my stablemate and friend, Carl Frampton. I am looking to step up in class and reach 10-0 as a pro by Christmas. The Conlan Revolution rolls into Manchester!”

In his hugely successful amateur career, Conlan was ranked No.1 in the AIBA world rankings at bantamweight with a medal haul that included an Olympic bronze medal (London 2012), Commonwealth Games gold (Glasgow 2014), European Championships gold (Samokov, Bulgaria 2015) and a World Championships gold (Doha 2015). He achieved superstar status in his homeland as one of Ireland’s most decorated amateur fighters of all time.

Since turning professional in the wake of a controversial exit from the 2016 Rio Olympics, Conlan has clocked up nine straight wins, with six of them coming inside the distance.

The 26-year-old made his debut as the headliner at the Madison Square Garden Theater where, after being walked to the ring by Irish MMA superstar Conor McGregor, he outclassed Tim Ibarra to get his pro journey underway.

He has since boxed in Chicago, Brisbane, Tucson and a further two times at the MSG Theater, before getting to perform in the main arena at the Garden against Ibon Larrinaga in May.

The following month he enjoyed a homecoming fight and a significant step up in class against Adeilson Dos Santos at the SSE Arena in Belfast, where he was victorious over the eight-round distance. Just last Saturday, at the Park Theater in Las Vegas, Conlan stopped the normally durable Nicola Cipolletta in the seventh round.