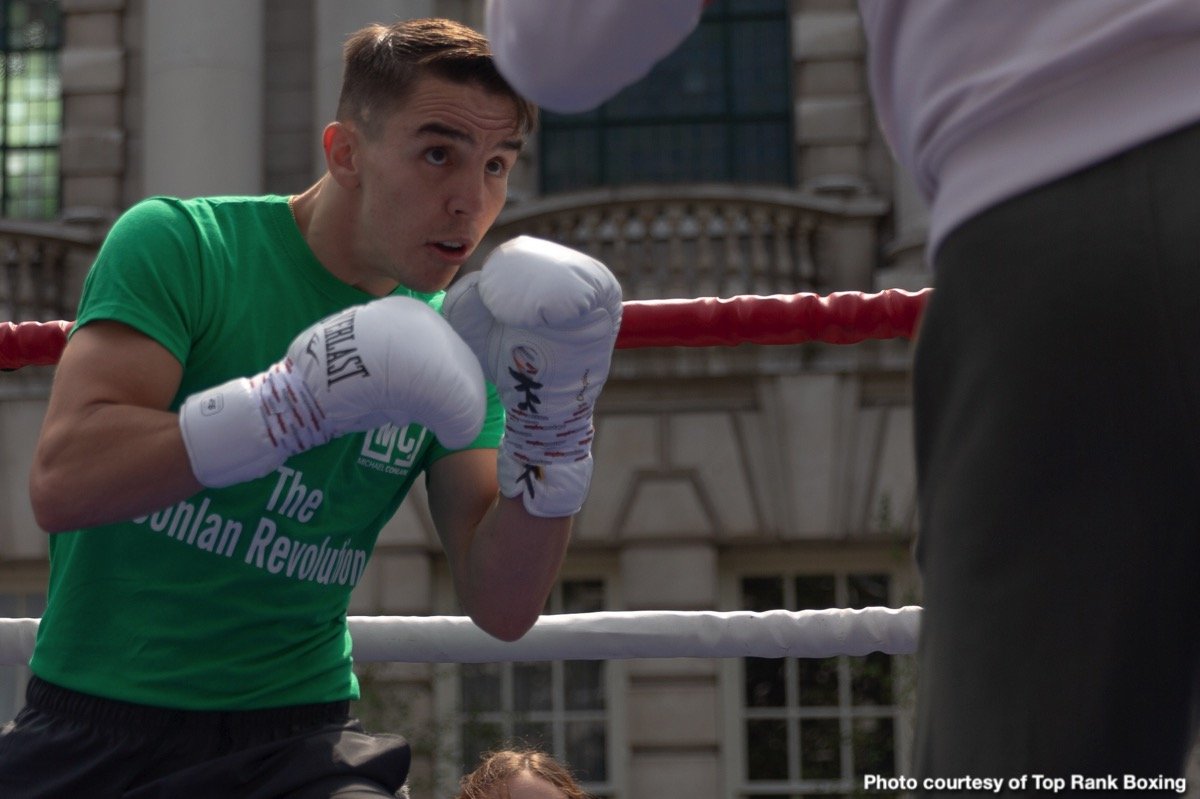 Michael “Mick” Conlan emerged from Belfast City Hall and walked up the steps of the makeshift ring set up outside in Donegall Square. In the center of the city, Conlan, the fighting pride of Belfast, took center stage.

Conlan (11-0, 6 KOs), one of the greatest amateur boxers to come out of the Irish system, will fight Diego Alberto Ruiz (21-2, 10 KOs) Saturday evening at Falls Park as part of the city’s annual Féile an Phobail summer festival.

Conlan has fought in Belfast once before as a pro, but this event is expected to draw roughly 10,000 of his most rabid supporters. Wednesday’s media workout was a celebration of Conlan’s Belfast roots, as the city’s Lord Mayor, John Finucane, stopped by to say a few words.

Ranked in the top 10 by two of the major sanctioning organizations, Conlan has a world title shot on his mind. In Ruiz, he is facing the toughest test of his career, a bruiser from Argentina who has won 10 straight dating back to June 2016.

After working out, this is what Conlan had to say.

“Fighting at Falls Park is really a dream come true. Féile an Phobail is now in its 31st year. I remember going to the festival for many years when I was a kid. The atmosphere has always been very celebratory for the Irish people, and fighting there on August 3 will be very special. I have so many friends and family who live very close to Falls Park. When I was younger, we lived very close, and it was like a second home for my friends and I.”

“I’m really excited. {Ruiz} is very, very good. He’s a tough guy, and if I want to be world champion, I need to beat this guy. I think you’ll see the best Michael Conlan yet come Saturday.”

Michael Conlan will take on WBC Latino Silver featherweight king Diego Alberto Ruiz in the cauldron of Féile an Phobail on August 3.

Belfast hero Conlan (11-0, 6 KOs) defends his WBO Inter-Continental strap in the city’s Falls Park when he faces dangerous Argentinian Ruiz (21-2, 10 KOs) – live on BT Sport in association with Queensberry Promotions and on ESPN+ in association with Top Rank.

Conlan, who had originally been slated to face former Olympic rival Vladimir Nikitin only for the Russian to withdraw citing a bicep injury, is delighted at the news of a step up in level for his third 10-rounder.

“I’ve got a high-class fighter ranked highly in the world. I’m expecting him to cause me more problems than what Nikitin could have caused me.

“Maybe, once I’m world champion, I might give Nikitin a shot but for now I’m moving on because it was more stalling my career than advancing it in terms of the level I’m at.

“Facing a higher level of opponent is better for me. I want to push on towards world titles and big, big fights and I have to start going through the gears now.”

Ruiz said: “This is the biggest fight of my career and a great opportunity to prove myself as a fighter. I fought June 1, and I am going to be ready for whatever Michael brings.

“It won’t be an easy fight, but it is not an impossible task. I am not scared to fight on the road. That is my motivation because the pressure will be on him.”

Michael Conlan has a new opponent

Michael Conlan has a new opponent for his Belfast homecoming. Conlan, who was originally slated to face former Olympic nemesis Vladimir Nikitin, will take on the dangerous Diego Alberto “El Profeta” Ruiz in a 10-round featherweight showdown Saturday, Aug. 3 at Falls Park as part of the city’s annual Féile an Phobail summer festival.

Nikitin recently pulled out of the fight, citing a biceps injury.

Conlan-Ruiz and the 10-round middleweight showdown between Luke Keeler and Luis Arias will stream live in the United States beginning at 5 p.m. ET/2 p.m. PT on ESPN+ — the industry-leading sports streaming service — on a special international edition of Top Rank on ESPN.

“When Vladimir Nikitin dropped out due to injury, I told Top Rank and MTK Global to get me the toughest possible opponent,” Conlan said. “Ruiz is on a 10-fight winning streak, and I know he’s coming all the way from Argentina to continue his victorious ways. This is my toughest test as a professional, but if I’m going to become a world champion, I must beat Ruiz. I’ve been busy in London with my trainer, Adam Booth, and I can’t wait to put on a show on August 3.

“Maybe once I’m a world champion, I might give Nikitin a shot, but for now, I’m moving on because it was more stalling my career than advancing it in terms of the level I’m at.”

“This is the biggest fight of my career,” Ruiz said. “This is a great opportunity to prove myself as a fighter. I fought June 1, and I am going to be ready for whatever Michael brings. It won’t be an easy fight, but it is not an impossible task. I am not scared to fight on the road. That is my motivation because the pressure will be on him.”

Conlan (11-0, 6 KOs) entered the pro ranks as one of Ireland’s most beloved sporting figures, having earned an Olympic bronze medal in 2012 and gold medals at both the European and World Championships in 2015. “The Conlan Revolution” turned pro in front of a sold-out Hulu Theater at Madison Square Garden crowd on St. Patrick’s Day in 2017. He won the vacant WBO Intercontinental featherweight belt last December in Manchester, England, besting Jason Cunningham via unanimous decision. In his last bout, in front of a raucous St. Patrick’s Day crowd at Hulu Theater at Madison Square Garden, Conlan defeated Ruben Garcia Hernandez over 10 rounds.

Ruiz (21-2, 10 KOs), a 25-year-old from Argentina, will be fighting for the first time away from his native country. He has won 10 in a row dating back to 2016 and is coming off a 10-round split decision June 1 over Luis Emanuel Cusolito for the vacant WBC Latino silver featherweight title. Before moving up to the featherweight ranks, Ruiz won the Argentina Boxing Federation’s bantamweight title and the WBC Latino silver super bantamweight belt.