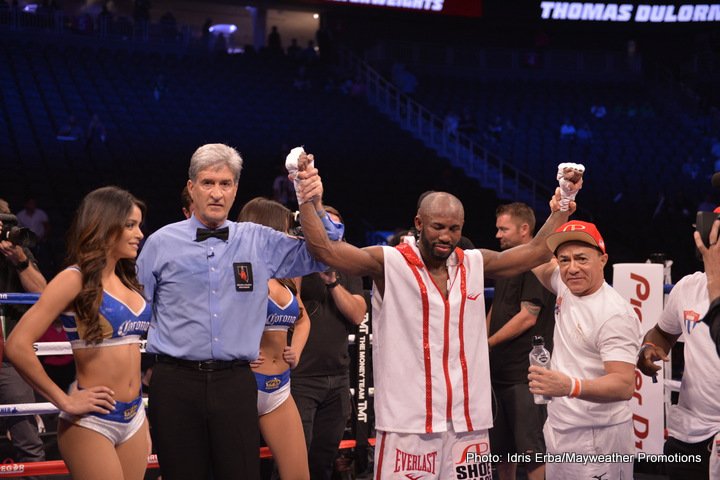 Both men looked to establish their jab in round one but in round two Ugas landed a big uppercut that stunned Dulorme and forced him to take a knee. Dulorme rose to his feet and tried to fire back but was hit with a right hand that put him down for the second time in the round.

“It was a great fight,” said Ugas. “I knew that Dulorme had a great camp preparing for Shawn Porter so when I knocked him down I figured he would get up. I only had nine days to prepare for this fight so I had to be smart and not waste anything.”

The bout was defined by good back and forth action with both men having their moments in control. Dulorme was committed to attacking the body to slow Ugas but was given a warning for low blows in the fifth round. Dulorme continued to test the body however and strayed too low early in the seventh round, forcing referee Vic Drakulich to deduct a point.

The deduction seemed to light a fire under Dulorme who pushed forward and began to break through the defense of Ugas. An uppercut temporarily stunned Ugas midway through the round and Dulorme followed up shortly after with a left hook that put Ugas on the canvas.

“When I got knocked down I knew I had to get up and show heart and guts,” said Ugas. “That was the only way to do it.”

The momentum of the fight continued to swing heading into the final round when Dulorme again delivered a low blow that forced the referee to deduct a point early in the frame. Both men pressed forward for the final minutes of the fight looking to score another decisive blow but after 10 rounds the fight was left up to the judges.

“I thought the referee lost the fight for me,” said Dulorme. “I didn’t agree with him. I didn’t think I was throwing low blows. I thought it was clean. I thought he was tired late in the fight so I tried to increase the pressure. But it was hard because the referee didn’t let me work on the inside like I wanted to.”

“I got a little tired at the end and should have closed the show,” said Ugas. “But that happens with short notice fights. I just have to keep getting better.”

“I’m going to get back in camp and keep learning,” said Dulorme. “I’m not happy, but I’m going to keep learning. I got off the floor today and kept fighting and I’ll keep doing that in my career.”

The opening bout of the telecast saw Juan Heraldez (13-0, 8 KOs) box his way to a unanimous decision over Jose Miguel Borrego (12-1, 11 KOs) in their 10-round welterweight fight.

“I was very prepared and I took advantage of this opportunity,” said Heraldez. “I executed my plan and came out with a clear victory. Other than the knockdown, I thought that I outboxed him every other round. “The jab was really the key tonight. I dictated everything off of the jab and tried to use my angles, my footwork and my movement. I did what I wanted to do.”

Heraldez controlled the ring for much of the fight with his jab and movement on the outside, while Borrego appeared focused on delivering power shots and a knockout. Heraldez controlled the pace in the first few rounds, landing scoring combinations before darting out of the way and avoiding Borrego’s return fire.

“Heraldez ran the whole fight,” said Borrego. “I’m happy that the fans booed the decision because they know he ran. I came to entertain the fans and that’s what I did.”

The 19-year-old Borrego was content to cover up and duck low while trying to navigate through Heraldez’s jab, but was unable to land enough left hooks to win early rounds in the fight. He had his first moment at the very end of the sixth when a looping left hook connected clean with Heraldez and appeared to stun him right before the bell ended the round.

Borrego continued to attack aggressively as he chased Heraldez with big power punches. In round nine Borrego connected cleanly with a left hook that put Heraldez on the mat midway through the round.

“I let myself get distracted and that’s why I got knocked down,” said Heraldez. I got a little ahead of myself. I’m the only person who can stop myself.

Despite Borrego’s continued aggression, Heraldez was able to hold on and survive the round without much further damage.

“I have to cut the ring off better,” said Borrego. “I also need to let my hands go more and throw three or four punch combinations instead of just one or two at a time.”

The final round saw Heraldez return to using his movement as he was able to avoid the charging Borrego for the last three minutes. After 10 rounds, all three judges scored the bout in favor of Heraldez by scores of 96-93 and 97-92 twice.

“It feels great to be on this stage and it’s moments like these where I can go out and compete and I can prove everyone right who gave me this chance,” said Heraldez. “This was a prospect fight and now I’m on to bigger and better things. I’m ready to take the next step.”