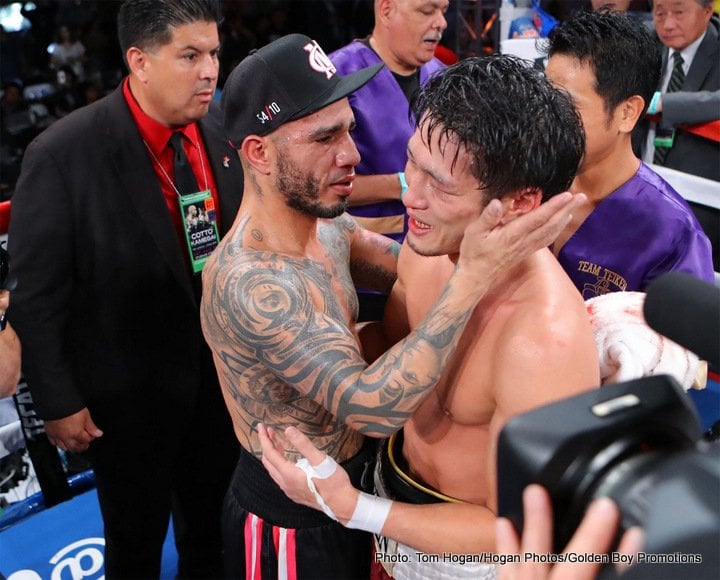 Miguel Cotto (41-5. 33 KOs) battered #6 WBO Yoshihiro Kamegai (27-4-2, 24 KOs) in winning an easy 12 round unanimous decision to capture the vacant WBO junior middleweight title on Saturday night at the StubHub Center, in Carson, California. It’ll be interesting to see if Cotto defends the WBO belt or if he moves up to middleweight for his final fight of his career in December.

The judges’ scores were 120-108, 118-110 and 119-109. The fight was a bad one arguably for HBO, because it was so one-sided. Kamegai looked like he didn’t belong in the ring with Cotto. It’s still hard to believe that the World Boxing Organization had Kamegai rated No.6, above Erickson Lubin, who they have rated No.10. I like Cotto, but I think Lubin would have beaten him badly tonight. The WBO needs to get their rankings together so that poor television mismatches like that don’t continue to be made. I think it’s bad for boxing to have embarrassing fights like this. HBO should have turned this fight down in my opinion. They should have told Cotto to go back to the drawing board until he picked someone with enough talent to make a fight of it.

Cotto, 36, looked good for a fighter coming off of a 2-year layoff. Kamegai appeared very weak, rarely threw punches in the later rounds. Cotto was doing a lot of shoving and getting away with it. The referee was there in body only. He was standing and watching without controlling the shoving from Cotto. Another questionable move Cotto showed in the fight was his tendency to lower his head and stick into the face of Kamegai, and then walk forward with his head still in the Japanese’s fighter’s face. It’s unclear why the referee allowed that.

All in all, it was a good performance from Cotto aside from the fouling. However, he didn’t nearly good enough to beat the likes of Gennady Golovkin, Saul Canelo Alvarez or David Lemieux. Those are likely the guys that Cotto will be picking from for his next fight.