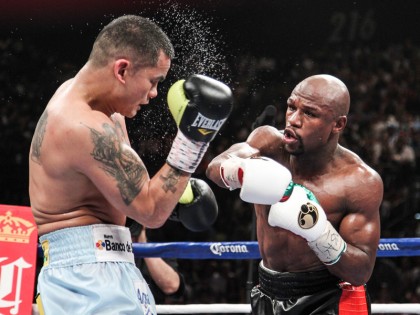 “The ref for @FloydMayweather vs @ChinoMaidana is Kenny Bayless. I’m telling you now, this is already a different fight hugely in Floyd’s favor”

This is kind of a big deal, since in the last fight Maidana’s strategy was essentially to fight as dirty as possible in order to find a way past Mayweather’s stellar defense. If you don’t recall just how dirty Maidana was, there is a brilliant video on Bad Left Hook that breaks down the dirtiness, frame-by-frame. If you thought “El Chino” looked dirty before, you should seehim in slow motion.

I’m just sorting through all this trying to protect my investment in the fight, specifically, “Mayweather by 12 round decision” (currently (-244). The dirty fighting helps Maidana’s chances, of course, while Kenny Bayless laying down the law would no doubt help Mayweather. This has Maidana trainer Robert Garcia worried enough that “he’s going to cry to Kenny Bayless.”

Garcia is no doubt bringing this up as a psychological ploy, to try to get Floyd to “man up,” and let himself get headbutted and rabbit punched. There’s nothing like a referee actually enforcing rules to pull the rug out from under you.

I don’t know how much any of this is affecting odds on the fight, as Floyd remains a 1/9 favorite.* While there is often a late Vegas bump on the underdog, and there is still time for that, it hasn’t happened yet.** Maidana is steady at 6/1.

There is movement on the proposition bet lines, however. The interesting part is that the price for Maidana by KO is getting more attractive, moving from (+826) to (+1005), as are

While I wouldn’t expect much betting on Maidana by decision, the classic boxer vs. puncher matchup holds that the boxer should be able to get ahead on the cards, and win a decison, while the puncher will be behind, and be forced to try for a knock-out, which is what he wants to do anyway.

Nor is the money going to Maidana by KO, though now that “El Chino” is getting to wear ocho ounce gloves, maybe it should. Part of my Mayweather by decision thesis was that he was going to make Maidana strap pillows to his wrists.

The money is going to Mayweather by a knock-out.

Last night on twitter, I was just trying to figure out why.

There is a bit of hype in that direction. Floyd Jr. said in the final press conference that he wants to knock Maidana out, and I’ve seen several alleged experts opine that they expect a late round KO by the champ, but lets face it–it’s sexier to pick a knock-out. It’s also a way to express a fighter’s expected dominance, though Carl Frampton showed last week that you can be extremely dominant and still go 12 rounds.

I’m not trying to be sexy. I’m trying to be Warren Buffett. Now, do I need to hedge my Mayweather by decision bets, or not?

Well, Floyd has only two knock-outs to his name since 2007. It sounds like he is in great shape for this fight, but isn’t he pretty much always in great shape? (Actually, I heard a rumor before the Robert Guerrero fight that he was out of shape, and I should take a shot on the underdog. This was from an associate of mine who is a former amateur boxer, lives in Grand Rapids, and sparred a little with Floyd when they were both teenagers. I did not bet that fight, with or without the rumor.)

Speaking of Floyd’s family, I found a recent interview of Floyd Sr., where the reporter asked him if he thought his son looked stronger this camp.

Floyd Sr. neither confirmed nor denied any greater strength, but said he expected Floyd Jr. to move a lot more this fight. This may be a bit of Senior’s bias coming through, since this is the sort of thing he recommends as a trainer, and he goes on to say that he thought Floyd should have moved more last fight. I couldn’t understand why he stood in the pocket so much, and let Maidana pin him up against the ropes so much last fight myself. I’ve heard people say that he couldn’t get out, as Maidana had him trapped, but I only saw this occasionally. Floyd wsan’t trying to move for much of that fight. The conspiracy theorist in me thinks Floyd was sandbagging, angling for a big payday, where he will take Maidana to school. If so, that big payday is here.

I just don’t know if there is a knock-out on the menu.

I don’t know how much I’d want to bet based on Floyd Senior either. He’s a grimy old dude who once did five years in the can for drug trafficking. (My associate above did time with him as well, for whatever it’s worth. How’s that for degrees of separation?) On the other hand, he is considered one of the best trainers in boxing. In any case, during that interview he doesn’t sound like part of the hype machine. He refrained from saying he expected a knock-out, and the things he said made a lot of sense, especially if you think Mayweather should have tried to use the ring more last time.

In a lot of ways I think I’m overthinking this fight, at least in part because I’m writing about it. I had Floyd by a 12 round decision last time, but didn’t put nearly as much thought into it. We were watching the fight at a Buffalo Wild Wings in Grand Rapids, and naturally were discussing the possibility of a knock-out, since I would lose a chunk if it happened. It was probably around the 8th round or so, and Mayweather was hitting Maidana with some hard shots. “I don’t think he CAN knock him out,” said my buddy,**** as Maidana kept coming, unfazed. He went on to explain that he wasn’t saying Mayweather doesn’t hit hard. “He hit hard even back when he was a kid. He didn’t hurt me, because I was too big for him, but don’t think he’s not doing damage, because he is.”

That’s the thing we forget, or maybe don’t realize in the first place. Mayweather hasn’t had many knock-outs lately, but he hit Maidana hard last time. That’s where the hype about him being stronger comes in, the rumors about Ariza shakes, anecdotes about how much more fit he is now, these are all swirling around to give us hope of a knock-out, so we will spring for the pay-per-view. Maybe he is stronger. Maybe it won’t matter. Maidana has not been knocked-out in 39 pro fights.

Maybe Mayweather was sandbagging last time. While Maidana will need to improve to beat Mayweather (especially if he can’t fight dirty this time), Mayweather only needs to adjust to win more decisively, and he should be able to adjust more quickly this time, unless Maidana can come up with new surprises for him. If he gets a handle on Maidana quickly enough, he will have more time to work on doing enough damage to knock him out.

That’s his best chance for a KO, but I don’t think it happens. Unless a late wave of fear &/or greed overtakes me, I don’t think I’m going to hedge, either. Mayweather by 12 round decision. See what price you can get.

*All odds are taken from 5dimes.com.

**This happens when a fight is at the MGM, and tourists in Vegas feel the buzz in the air, and decide to bet the fight. When they find out how much they have to bet on the favorite to win anything ($900 to win $100, for instance) they say “screw it, I’ll bet the underdog,” (then risking only $100 to win $600, for instance.)

***5dimes limits prop wagers early on, not allowing a second bet until the line moves, so I tend to bet serially like this when I have a strong opinion. I also took Mayweather by decision back in May. I forget the odds now, but I think they were in the (-200) to (-300) range then as well.

If you want to give me a piece of your mind, and tell me why I don’t know anything about boxing, you can reach me on twitter, @Fight_Whisperer.