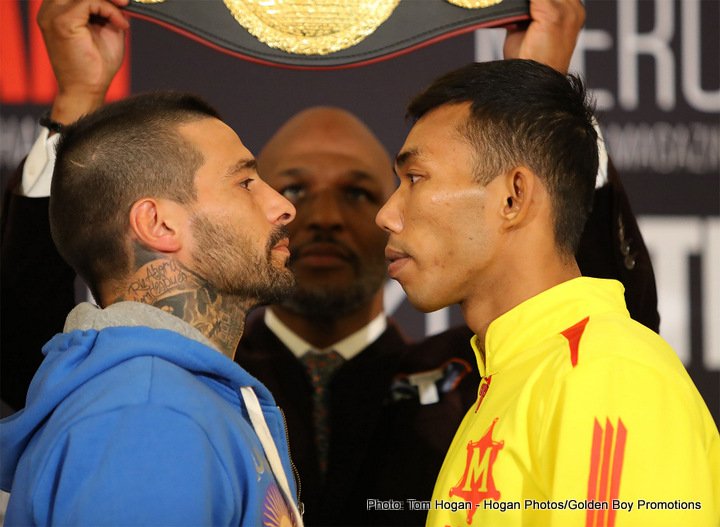 Lucas Matthysse is ready to throw his name into the mix at welterweight when he takes on undefeated Tiwa Kiram for the vacant WBA welterweight world title.

The pair clash this Saturday night exclusively live on BoxNation from the Forum in Inglewood, California, with Argentine Matthysse moving up from light-welterweight to take on the relatively unknown and untested 25-year-old Kiram.

Hard-hitting Matthysse, who has 35 knockouts in his 38 wins, has promised a return to his best in order to capture the 147-pound title.

“I’m excited at this opportunity to fight for a world title. I’ve prepared for this fight really well. We prepared in Argentina, and then finished in Indio,” he said.

“This Saturday, I will walk away with a world title. I know that he manages his distance well and that he has a good jab, but I am prepared for that. I learned a few things, but I assure the fans that they will once again see the “Machine” this Saturday,” said Matthysse.

Thai ace Kiram, who is yet to taste defeat, with a highly impressive record of 38 wins with 28 knockouts, is ready to make his mark and upset Matthysse when they meet.

“I’m very thankful that I’m fighting for a world title this Saturday against Lucas Matthysse. I’m looking forward to winning a world title and taking the belt back to Thailand. I’m ready to show the world who I am and put on a great fight,” said Kiram.

Also on the BoxNation bill this weekend will be lightweight star Jorge Linares who defends his WBA world title against the Philippines Mercito Gesta.

32-year-old Linares is a familiar face with British fights fans after having faced and beaten both Luke Campbell and Anthony Crolla in his previous fights.

He is now looking to continue that momentum when he takes on Gesta, who is being trained by Hall-of-Famer Freddie Roach, and says his mind is only on this fight despite being linked with a potential bout against the talented Mikey Garcia.

“I’m not thinking about any other fight right now,” said Linares. “Gesta is a tough fighter. He’s a quick southpaw who is dangerous. It’s very important to be victorious this Saturday. Bigger and better things will come with a victory this Saturday. I’m ready to do the business.”

30-year-old Gesta, who has lost just once in his career, that being on points against Miguel Vazquez when he challenged for the IBF lightweight title, says he is going to knockout Linares to claim his first world title.

“This Saturday I’ll be coming to take home the title. I’ve been training hard for this fight. This is my second shot at a title, and I’ll make the most of it with a knockout victory. I’m going to give everything to win this fight,” said Gesta.

BoxNation’s exclusively live coverage will start from 2.30am this Saturday night.

Matthysse vs. Kiram and Linares vs. Gesta this Saturday on HBO

HBO Boxing ushers in a new year with the all-action doubleheader HBO BOXING AFTER DARK: LUCAS MATTHYSSE VS. TEWA KIRAM AND JORGE LINARES VS. MERCITO GESTA, presented SATURDAY, JAN. 27 at 10:30 p.m. (live ET/tape-delayed PT) from The Forum in Inglewood, Calif. The HBO Sports team will call all the action, which will be available in HDTV, closed-captioned for the hearing-impaired and presented in Spanish on HBO Latino.

The main event spotlights ring warrior Lucas Matthysse (38-4, 35 KOs) of Argentina as he battles undefeated challenger Tewa Kiram (38-0, 28 KOs) of Thailand for a vacant welterweight title in a scheduled 12-round clash. Making his fifth appearance on HBO, Matthysse, 35, is a fan favorite, thanks to his aggressive, come-forward style. During his 14-year career, he’s taken on all challengers, including Danny García, Zab Judah, Lamont Peterson and Ruslan Provodnikov. Matthysse’s impressive dismantling of Emmanuel Taylor on the undercard of Canelo-Golovkin in May set the stage for this title shot.

Making his U.S. and HBO debut, Kiram, 25, looks to make a statement. With 28 knockout victories since turning pro at age 15, he would quickly catapult himself into the spotlight by defeating the respected veteran.

The night opens with Jorge Linares (43-3, 27 KOs) of Venezuela, now residing in Tokyo, defending his world lightweight title against Mercito Gesta (31-1-2, 17 KOs) of the Philippines, now living in San Diego. The scheduled 12-round bout marks the 32-year-old Linares’ sixth defense of the crown he captured in 2014; he won an exciting fight over challenger Luke Campbell at The Forum last September.

Southpaw challenger Gesta, 30, has just one career defeat, which came in 2012 at the hands of former lightweight titlist Miguel Vázquez in his only other title shot. An impressive stretch of wins, including a knockout victory over Martin Honorio at The Forum in July, earned him this shot against the reigning champ.

Beginning its 22nd season, HBO BOXING AFTER DARK has delivered some of the sport’s most memorable moments since 1996, including Ward-Gatti 1, two fights from the Rios-Alvarado trilogy and the consensus 2016 Fight of the Year between Francisco Vargas and Orlando Salido. The franchise has helped launch the careers of some of boxing’s biggest and brightest, including Gennady Golovkin, Canelo Alvarez, Sergey Kovalev, Miguel Cotto, Wladimir Klitschko, Marco Antonio Barrera and Shane Mosley.