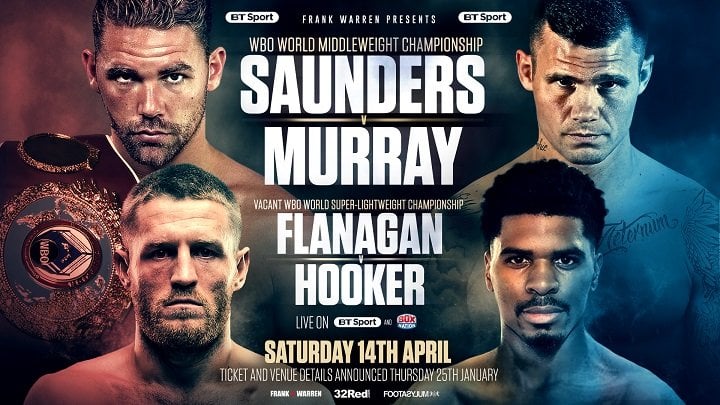 Saunders, fresh from a 12-round masterclass against David Lemieux in the Canadian’s home town, returns to the UK to face long-time rival Martin Murray. Saunders’ career-best performance in Canada has seen him risen to be considered by many the top active boxer in the UK and the Hatfield man is looking for 2018 to be the biggest year of his career.

Murray is the final hurdle for Saunders in obtaining a complete domestic whitewash of British and Irish Middleweights that already includes Andy Lee, Chris Eubank Jr, Spike O’Sullivan, John Ryder and Nick Blackwell. Should Saunders overcome Murray on the 14th April it is likely to clear the path for a blockbuster showdown for all the World Middleweight Titles against the winner of the highly-anticipated rematch between Gennady Golovkin and Canelo Alvarez.

In the other World Title clash on the card, unbeaten former WBO World Lightweight Champion Terry Flanagan faces unbeaten American Maurice Hooker for the WBO World Super-Lightweight Championship, in his first contest at the weight. Flanagan had defended his 135lb World Title 5 times before relinquishing the belt to move to Super-Lightweight, a more comfortable weight class for his stature.

02 presale tickets for this blockbuster evening of action are available via www.axs.com from 10.00am on Friday 25th January.

Promoter Frank Warren today (Friday) confirmed that Saunders (26-0, 12KOs) will defend his WBO world title against Murray (36-4-1, 17KOs), live on BT Sport and BoxNation in Britain and Ireland, with a UK venue and further details to be revealed at a press conference next week.

Saunders is coming off the back of a dominant points victory over David Lemieux and the Hatfield native considers his next bout to be a final warm-up fight for a showdown against the winner of an anticipated rematch between Gennady Golovkin and Saul ‘Canelo’ Alvarez.

While Saunders and Murray are both managed by MTK, the 28-year-old champion insists that sentiment will not distract him from his ongoing mission to unify all four world belts at 160lbs.

READ:  Boxing’s Most Debated Decisions to be shown on ESPN2 this Wednesday

“Martin Murray is a good fighter and I have got the greatest of respect for him,” said Saunders. “But he’s in the way of what I’m aiming for this year and that is to become undisputed middleweight world champion.

“He’s coming to try and win my world title and I’m sure it’s going to be a good fight,” added the title holder, whose determination to win is matched by his challenger.

Having fallen short in his efforts to win a world title at super-middleweight, losing a split decision to Arthur Abraham in 2015, Murray will return to middleweight for what will be his fourth effort to claim world honours at 160lbs.

“I rate Billy Joe as a fighter, he’s one of slickest out there and he is coming off of a great win and he will be very confident,” said Murray. “But I’m very confident too. This is my time to become world champion as it’s the only thing I have left to do.”

The 35-year-old St Helen’s man has suffered plenty of world-title heartache as he previously drew with Felix Sturm before coming out the wrong side of a tight points loss to Sergio Martinez – both contentious results – while he also lost out to Golovkin despite a brave effort.

“I’ve fought everyone and in my opinion at middleweight I have only one genuine loss, which is against Gennady Golovkin who is the best out there,” insisted Murray.

“I don’t count Martinez or Sturm as genuine losses because of the scorecards. But this time around, in my first world-title fight at home, as we are both British fighters fighting on home soil, I know the best man on the night will get the win and leave the arena as world champion,” added the challenger.

Flanagan said: ‘Hooker is a very good unbeaten fighter, he fights on the back foot and looks to catch you from distance. However I’m very confident I’ll be able to deal with anything he throws at me to become a two-weight World Champion. Winning this fight will prove I’m a legitimate 140lb fighter I’ll be looking to unify the belts later in the year.’

Whilst undefeated American Maurice Hooker said: ‘I’m looking forward to coming to the UK to fight Flanagan and to become World Champion. We are both undefeated fighters and I’m sure it’s going to be a fantastic fight!’

Details of the venue that will stage the event, the full announcement press conference and ticket information will all follow next week.