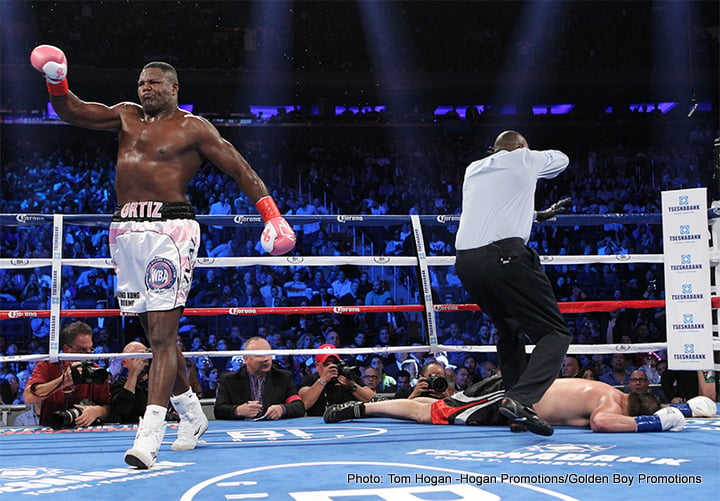 One of the world’s most dangerous and exciting Heavyweights, Luis Ortiz, tops the bill as he looks to add to his 22 KOs from 25 wins as he takes on Malik Scott for the WBA Inter-Continental title – with Ortiz making his European debut in his first fight since teaming up with Matchroom Boxing.

WBA World Bantamweight king Jamie McDonnell defends his crown against Liberio Solis. It’s the fifth defence for the Doncaster ace, who followed his stoppage win over Javier Chacon with a pair of impressive wins over Tomoki Kameda in Texas last year and stopped Fernando Vargas in nine rounds at The O2 in London this April.

Former Super-Flyweight World ruler Solis boxes for the second time to become a two-weight World champion having severely tested WBC king Shinsuke Yamanaka in Japan in March, with both men hitting the canvas before the champion outpointed the Venezuelan challenger.

Stephen Smith has landed a second World title crack, challenging WBA Super-Featherweight kingpin Jason Sosa. Smith travelled to Connecticut to meet IBF ruler Jose Pedraza in April in his first outing for a World belt, and recovered from that points loss with a commanding win over Daniel Brizuela in his hometown of Liverpool a month later. Puerto Rican-American Sosa defends his strap for the first time having ripped the crown from Javier Fortuna in Beijing in June.

There’s a tasty rematch on the bill as Martin Murray looks to avenge his World title loss to Arthur Abraham as the pair clash for the WBO International Super-Middleweight belt – with Murray looking for revenge after suffering a split-decision loss for the German’s World title in November.

“It is an absolute honour to bring this huge night of World championship boxing to Monaco,” said promoter Eddie Hearn. “It’s been a wonderful few years for British boxing but to showcase this great sport in such a high quality environment is very exciting. This is going to be the most high profile fight night of the year and we are looking forward to putting on an exceptional night of boxing for Monte-Carlo, fans and all of our international broadcasters.”

“We are thrilled to host this new world class boxing event and to perpetuate the tradition of boxing in Monaco which had now become a major rendez-vous for the Casino de Monte-Carlo” said Pascal Camia, Executive Vice President, Casinos of Monaco. “From the gambling tables to the ring, the adrenaline will be flowing for a night of show and entertainment to be remembered.”

Exciting heavyweight star Luis ‘King Kong’ Ortiz has joined forces with Matchroom Boxing as he plans an assault on the Heavyweight World titles.

Unbeaten Ortiz is one of the most feared fighters on the planet and has blasted away 22 of his 25 opponents inside the distance, with the vicious Cuban’s last two outings underlining his fearsome reputation as dismissed Bryant Jennings in seven rounds to land the interim WBA crown in December and then destroyed Tony Thompson in six rounds in March.

Ortiz is hunting down World honours and will make his European debut in November in his first fight under the Matchroom banner and the 37 year old monster revealed his excitement at his upcoming schedule.

“I always had faith in my manager and friend Jay Jimenez but I never expect this fast turn around and I’m so excited about the future,” said Ortiz. “God has been great to me and my family – I’m ready.

“I’m going to be very busy over the next few months and looking forward to boxing in many countries as we continue my journey to the Heavyweight World championship.”

Ortiz becomes Eddie Hearn’s first overseas acquisition and the promoter says he plans to get Ortiz out regularly to get him in line to land a World title shot.

“Luis Ortiz is one of the most exciting Heavyweights in the World and I am delighted to be working with him,” said promoter Eddie Hearn. “We plan to keep him very busy and let the fans enjoy his devastating power. Luis is an avoided fighter but we plan on giving him the profile that will make that impossible.

“First stop for ‘King Kong’ will be announced on Monday on a huge card in November and then we plan to get him out in the UK straight after, potentially on the Anthony Joshua card. I’m very excited to work with our first international fighter as we continue to expand into new markets.”