Mexican legend and all-time great Marco Antonio Barrera, looking very much younger than his 48 years, is of course in the UK for his exhibition bout with Ricky Hatton, which will take place tomorrow evening in Hatton’s home town of Manchester. And Barrera, who gave us so many special, epic fight nights, has been speaking with the media all week. A humble person indeed, Barrera seems to genuinely appreciate the attention he has been getting.

Speaking with IFL TV, Barrera – who ruled at super-bantamweight, featherweight and super-featherweight, and retired with a 67-7(44) record in 2011 – was asked to list his favourite fights from his own career. Barrera as we know has some incredible career to look back on, but he answered the question as follows: 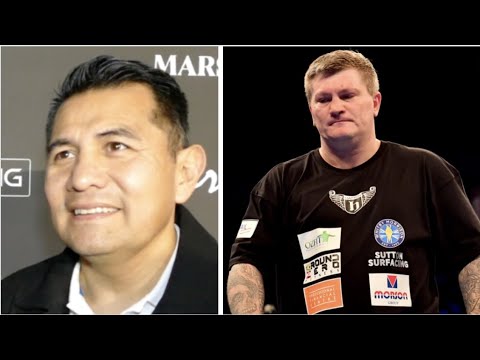 “[Naseem] Hamed. That was a fight that really made my career take off,” Barrera said as translated by his son. “Second one, is the three fights I had with Erik Morales. They were just all-out wars, the best trilogy there’s ever been. And number three, Juan Manuel Marquez, just two Mexican warriors going at it.”

The win Barrera, an underdog going in, scored over Hamed, which came in April of 2001, all but ended the career of “The Prince,” who was never able to regain his old confidence after being thrashed over 12 rounds by a fully focused Barrera. Barrera boxed instead of slugged, and Hamed was unable to win more than a handful of rounds (although the fight was closer on the cards that we perhaps tend to think it was).

The three classics with Erik Morales, fought from 2000 to 2004, are of course ranked amongst the very best fights in history. And Barrera won the trilogy, 2-1. The Marquez fight, which Barrera lost via decision in March of 2007, was one of Barrera’s last good performances. The unanimous decision that went to Marquez proved controversial, with plenty of fans and experts feeling Barrera had done enough to win. Barrera scored a knockdown in round seven, yet it was scored a slip by the referee. HBO had Barrera winning the fight.

But Barrera seems to have no real regrets when he looks back on his long career, and we fans will always rank him as one of our favourite fighters. Now, let’s see what Barrera and Hatton can do in the ring together tomorrow night.