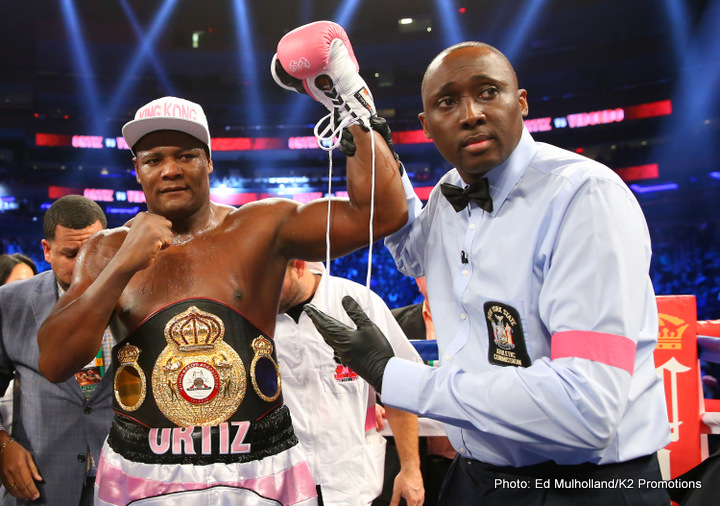 Tonight in Manchester on the big Joshua-Molina bill, unbeaten Cuban heavyweight Luis Ortiz hammered out a relatively routine 7th-round stoppage win over a tough but not too ambitious David Allen. The 37-year-old southpaw finally got the stoppage right at the end of the 7th, as he teed off with both hands having hurt the 24-year-old Brit.

A dull fight, Ortiz could perhaps have pushed for the stoppage earlier than he did. Allen, though, did hardly any work apart from show his durability in taking Ortiz’ clubbing shots. Allen was cocky, dropping his hands, even taunting Ortiz, but he never came close to winning a round. Ortiz pumped out his right jab and his hurtful left uppercut to the jaw was effective a number of times.

Ortiz was guilty of belting Allen low a couple of times, for which he was warned, but other than that the Cuban seemed content to enjoy a hassle-free workout. It looked as though the fight, scheduled for eight rounds, would go the limit, even though Allen was open-mouthed and looking tired by the 4th and 5th. But then in the 7th, Ortiz exploded into life as he hurt Allen with a right, immediately following up with both hands. Allen did not go down – although he did wrestle Ortiz to the canvas as he was trying his utmost to hold on – and the end came with just a second to go in the session.

Allen briefly protested, Ortiz pumped his chest, “King Kong” style. Ortiz, in his second fight under the Matchroom banner, got the stoppage but he didn’t really impress. Looking slow and lumbering at times, Ortiz certainly didn’t electrify the crowd. Maybe, if Allen had shown more ambition and mixed it up more, Ortiz would have let his own hands go more frequently and a lot sooner than he did.

On the plus side, Ortiz never lost a round, he barely took a punch and he is staying busy. But time may be running out for him if he is to realise his goal of winning the world titles and of engaging in the big, big fights. It’s unclear where Allen goes from here.