Arreola has shared the ring with both Wilder & Ruiz, and he sees Deontay as the more dangerous fighter due to his power. But also, Arreola saw flaws in Ruiz’s game from his close 12 round unanimous decision win over Luis Ortiz last Sunday night in their headliner at the Crypto Arena in Los Angeles.

Arreola notes that Ruiz (35-2, 22 KOs) chose to spend a lot of time on the outside, and he feels that’ll lead to him getting knocked out quickly if he fights like that against the big 6’7″ Wilder.

With Wilder’s reach, he’ll get a perfect extension on his powerful right hand if Ruiz stays on the outside and will take him out.

“I had him winning by two rounds. Actually, the knockdowns are what won the fight for him in my eyes, but it was a very good fight,” said Chris Arreola to Fight Hub TV about Andy Ruiz Jr scraping by with a decision over Luis Ortiz due to his three knockdowns.

“Yeah, it was very close for a very long time, but when Andy puts his hands together for exchanges, he wins every time. His hands are fast, he’s strong, and he has that snap on his punches.

“Personally, I thought he [Ruiz] was afraid of being countered, but towards the end, I thought he was getting a little winded and picking his spots where he wanted to go,” said Arreola when asked why Ruiz didn’t go for the knockout.

“I think he was picking his shots and waiting for the right time. It’s a fun fight. I pick Wilder [to beat Ruiz] because of his size. He’s a big dude, and he’s been in there against the best of the best.

“He knocked him down earlier than he did. It should be a good fight. Of course, it’s a close fight. You can never count out the destroyer. He’s one of those fighters where you never know what you’re going to get out of him.

“Be more active than this fight,” said Arreola when asked how Ruiz beats Wilder. “You can’t stay out like that and get pot-shotted against Wilder. If you stay out there, it’s going to be a short night for Wilder. Andy has got to stay inside and keep his hands busy,” said Arreola. 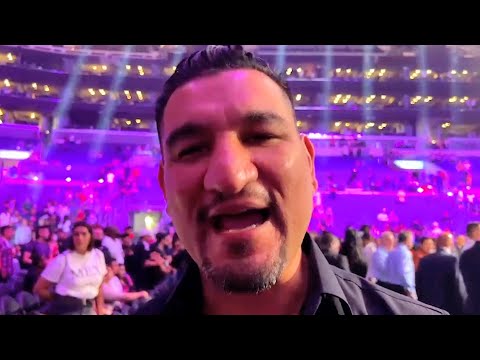