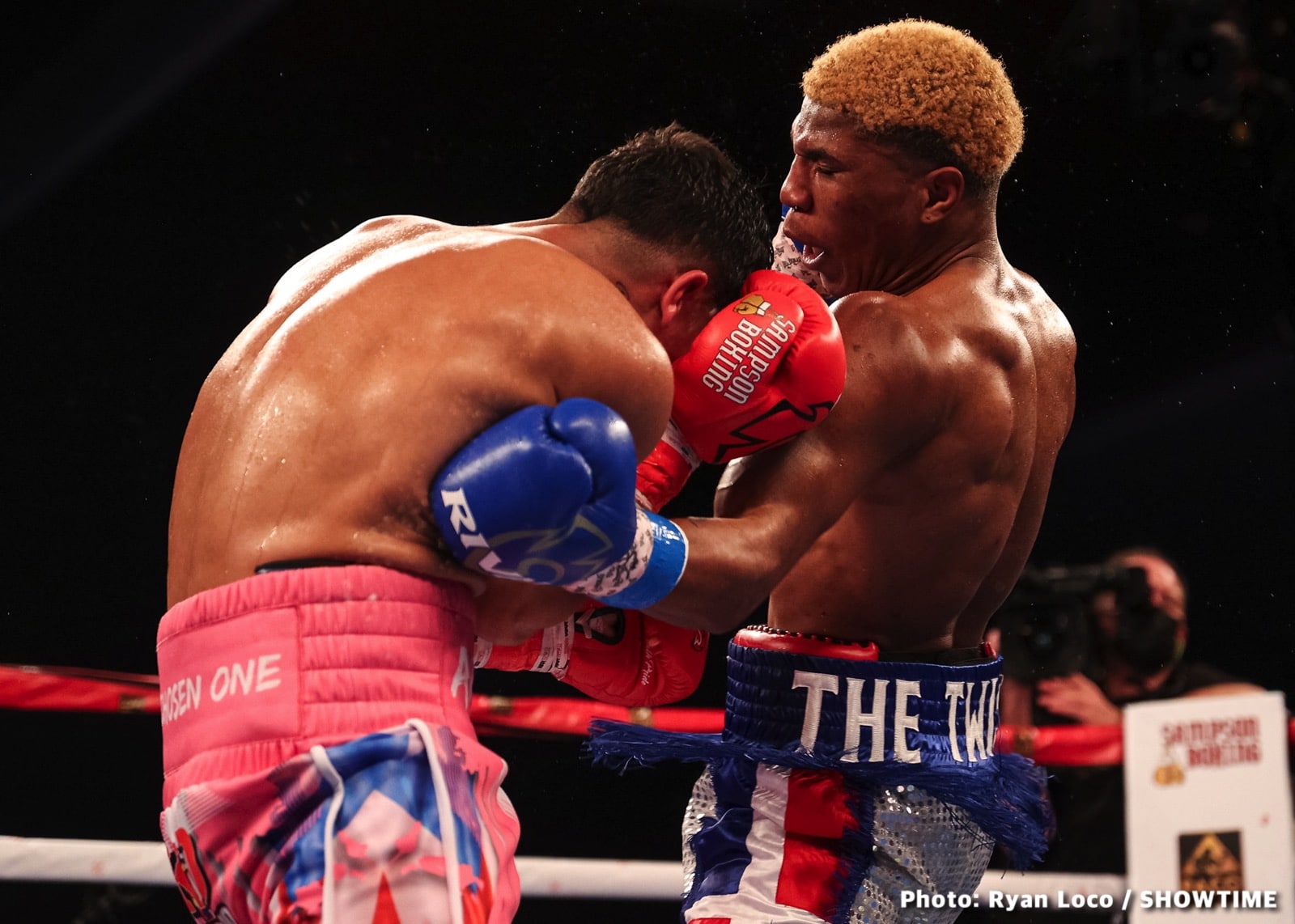 Luis ‘The Twist’ Nunez made the most of his time in the spotlight with a 10th round stoppage of Carlos ‘The Chosen One’ Arrieta in the main event on Showtime TV. The win moves the 22-year old from the Dominican Republic to a career record of 16-0 (12KO) while Arrieta (14-1, 8KO) suffered his first career defeat.

IN THE RED CORNER – LUIS NUNEZ

A gold medalist at the 2016 World Youth Championships, Nunez fought the first 14 bouts of his professional career in his native Dominican Republic before relocating to the USA and training under Chelo Betancourt.

Last time out, Nunez produced an upset unanimous decision win over then undefeated Jayvon Garnett in his USA debut, and was now participating in his first headline event on American television. Nunez lived up to his nickname on the occasion, entering the ring to the sounds of ‘The Twist’ and performing the signature dance made famous by Chubby Checker decades ago.

IN THE BLUE CORNER – CARLOS ARRIETA

This fight would provide the biggest test to date for Arrieta, the Puerto Rican had racked up a career record of 14-0 but exactly half of those wins had come against opposition without a professional win to their name. This was Arrieta’s third straight fight in the state of Florida, with his last two bouts being unanimous decision wins over Manuel Lara (2-4) and Julio Buitrago (13-24).

The contest was originally scheduled at featherweight, but moved up to junior lightweight after Arrieta came in overweight on the week of the fight.

In the opening minute of the fight, Nunez moved around the ring in confident and measured fashion while a more tightly wound Arrieta threw sharp blows to the body. Arrieta fired out a sharp triple jab and had the superior workrate throughout the opening period, Nunez responded with a stiff uppercut and some heavy blows that were soaked up by the guard of The Chosen One.

Nunez came out throwing more punches in round two while Arrieta remained a threat with fizzing punches on the counter. Arrieta applied pressure throughout the round, but it was the confident Nunez who held his ground and landed the heavier blows.

Between rounds, trainer Betancourt praised Nunez and advised him to use Arrieta’s pressure against him, advising his fighter to “let him come a little bit so we can catch him coming in.”

The heavy blows of Nunez started to take their toll in round three with swelling beginning to show on the left eye of Arrieta, a wound Nunez honed in on with a crashing overhand right. Arriera did not stop coming forward and following the instructions of his trainer, Nunez froze him with a strong left hand to the jaw.

Arrieta raised his guard and soaked up some heavy blows before responding with a flurry of body shots intended to slow down the heavy hitting offense of Nunez.

While Nunez continued to find the target with some good shots, trainer Betancourt reminded him after the round to keep using the jab and box smartly against the aggressive Arrieta.

With bruising now visible under both eyes, Arrieta fired out of the blocks for round four, firing shots before being pushed down by Nunez in what referee Frank Gentile ruled a no knockdown. Nunez landed a strong right hand only to receive three blows back from Arrieta who refused to take a backward step.

The pair leaned on each other late in the round before referee Gentile separated them and Nunez lowered his guard before both fighters exchanged blows before the bell.

Nunez took a shot and shook his head to open round five before landing a right hand, only to receive a left hand back from Arrieta who continued to fight well behind the jab. Nunez rocked Arrieta with three strong blows and Arrieta responded with a one-two combination to the body. Arrieta raised his guard high and absorbed powerful blows while continuing to swing hooks that targeted the rib cage of Nunez.

Statistics displayed by Showtime after round five illustrated a well balanced fight, with Nunez landing 80 of 321 punches while Arrieta found the target with 77 of 298. Both men exchanged offensive flurries before Nunez sent sweat flying with a crashing right hand to the jaw of Arrieta. Nunez ended the round by picking his shots while Arrieta continued to press forward and swing hooks.

“You’ve gotta win these rounds that are left” were the words of Arrieta’s trainer Melvin Garcia as he pushed his fighter to pick up the pace under the belief that Nunez was edging ahead on the scorecards.

Nunez split the guard of Arrieta with a strong right hand and smiled at his opponent but Arrieta continued to come forward relentlessly while firing out jabs. Arrieta was displaying the higher work rate in round seven, but the more telling and powerful shots were coming from Nunez, who dropped his guard and probed for an opening late in the round.

Round eight started in very entertaining fashion, as both fighters stood within inches of each other and traded flurries in rock ‘em sock ‘em style. Neither fighter appeared to have much use for the jab, with Arrieta digging away to the body while Nunez head hunted with powerful lefts and rights. Late in the round, Nunez again dropped his guard and showed good movement to evade his aggressive opponent.

The start of round nine was delayed when referee Gentile ordered the corner of Nunez to dry down excessive water applied to the face of their fighter between rounds. The ninth round was a contrasting affair, with high energy exchanges interchanged with long clinches that saw both fighters warned by referee Gentile for holding. The jab was again a rare sight as both fighters stood toe to toe looking to land a heavy, decisive shot.

Both fighters returned to fighting behind the jab early in round 10, with nunez attempting to fight on his toes and picking his shots only to be crowded by the aggressive pressure cooker style of Arrieta.

Ultimately, the front foot style of Arrieta would be his undoing as he stepped forward onto a crashing right hand by Nunez that staggered the Puerto Rican fighter badly. With his opponent visibly shaken, Nunez finished in devastating fashion, pinning Arrieta to the ropes and unleashing a barrage of punches before referee Gentile was forced to step in and wave off the bout.

The final stats displayed by Showtime telled the story of a competitive fight, with Nunez landing 142 of 556 total punches, while Arrieta connected with 131 of 541. Notably, both fighters abandoning the jab as a primary strategy showed through with Nunes landing only 14 jabs over the 10 rounds in comparison to 15 connected by Arrieta.

After the man known as The Twist celebrated in the ring with his win with his signature dance, Nunez was interviewed by Showtime. “The plan was to work and at the end I saw he was fading,” said Nunez. “That was the final nail after I hit him with that straight right hand. Once I landed that, I knew he was gone.”

“I hope for a lot of good things in the future, but everything is up to my manager and my promoter,” said a humble Nunez post-fight. Manager Antonio Tineo Sr. and promoter Sampson Lewkowicz have plenty of options for a man who is on the rise as a top featherweight prospect.

It is possible Nunez finds another fight against a non-elite opponent with a good win/loss record to continue his development incrementally, or the fighter’s team may decide to throw him in against the lower end of the division’s top 10. If that is the case, Joet Gonzalez or dethroned world champion Kid Galahad would be appealing fights.

Arrieta put up a brave fight and was a tough out for a top level prospect like Nunez, but will likely drop down a level as he looks to get back to winning ways. If Arrieta was ever to face Gonzalez, the pair of front foot pressure style fighters would doubtless produce a very entertaining matchup.