Former heavyweight champion Larry Holmes says today’s fighters Tyson Fury, Anthony Joshua, and Deontay Wilder lack skills. Holmes doesn’t like what he sees from the flawed bunch, and he prefers the talented heavyweights during his era.

One thing that bothers Holmes is the fact that a lot of the fighters avoid each other, trying to protect their records, and they don’t fight anybody. 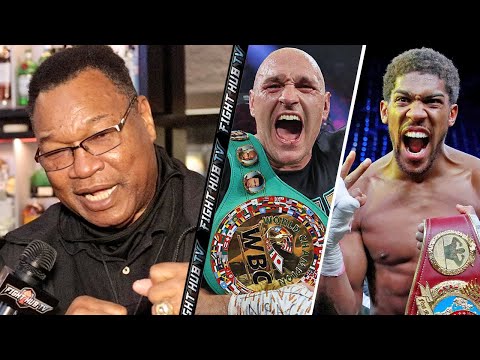 During Holmes’ era, the best fought the best, and they didn’t have the cherry-picking that has polluted the current era. There are a small handful of old-school fighters in each division willing to fight the best, but unfortunately, they’re outnumbered.

Holmes says they didn’t duck fighters in his day

“The fighters today are not the fighters that I fought. We fought the top ten and we didn’t duck nobody,” said Larry Holmes to Fight Hub TV. “Earnie Shavers, Gerry Cooney, Kenny Norton, all those strong guys. Today, the guys don’t fight.

It’s true what Holmes says about fighters during his era not ducking each other like they do today.

Things were less complex back when Holmes fought because the networks weren’t making things problematic, and the fighters weren’t cherry-picking like we’re seeing at heavyweight, 135, 147, 160, and 168.

Those are the divisions where we consistently see cherry-picking from a small handful of fighters, but not so much at heavyweight. I think we all know who the main cherry picker is in boxing, so there’s no need to name the multi-division champion.

“If you want to make the money, you’ve got to bring it too. You got to make these fights,” said Holmes. “I think when I quit,” said Larry when asked when the fighters stopped wanting to fight each other.

“I was the last hope to keep boxing going. Boxing has been good to me. No sense in me staying in there messing up. They still got some guys out there that can fight a little bit.

“I didn’t get to see it all, but they had a good fight,” said Holmes about the trilogy match last October between Deontay Wilder and Tyson Fury.

“No, what about me?” said Holmes when told that a lot of fans are calling the Fury vs. Wilder III fight the ‘greatest fight ever.’ “Kenny Norton, Earnie Shavers, Gerry Cooney, you can’t leave these guys out.

“Those guys were great guys, good fighters. I praise them all the time, and that’s what our country needs to do,” said Holmes.

Fury, Wilder & Joshua have “No skills”

“They don’t have no skills,” said Holmes when asked about the talent of Fury, Wilder, and Anthony Joshua.

Tyson Fury used to have excellent skills until he hired an American trainer, who turned him into a mauling slugger, who gets hit a lot. That style is going to shorten Fury’s career, but he did use to have skills.

As for Joshua and Wilder, they’re both pure sluggers and still learning on the job despite being in their 30s.

“Listen, you got to punch here. They throw punches here for a jab,” said Holmes in lowering his arm. “You got to throw punches straight with a jab. You’ve got to have that out there like that.

“Guess what? You can’t hit me with that right hand because this hand is protecting me. They don’t know how to throw a one-two to get in and move out and protect yourself.

“You know what? They have it. I had my day and I had a great time doing what I was doing. He got to move like Larry Holmes. That’s what he’s got to move like,” said Holmes about Tyson Fury.

“You got to give punches. You shouldn’t take punches, and that’s what he does. He takes punches. I guess that what he wanted to do is prove to people that he can take a punch.

“They always talk that stuff but the only thing they get out of that is get hurt,” said Holmes about Oleksandr Usyk moving up from cruiserweight to heavyweight.

“I saw some of it, but I didn’t give it too much attention because these guys do that. I’d rather watch professional wrestling,” said Holmes when asked if he likes to watch anyone in boxing.

“Have you seen those guys lately? Wrestling is crazy. Those guys are out of it. I should start watching that. I watch some of them, but they’re not bang, bang, bang,” said Holmes about Canelo Alvarez’s fights.

“That’s what I’m talking about. The exhibition fights are better than the regular fights, so people are going to the exhibition fights. I think it’s good that Mike Tyson can stay in shape, but you can’t take that seriously because people pay their money and they want to see a fight. That’s all to it,” said Holmes.