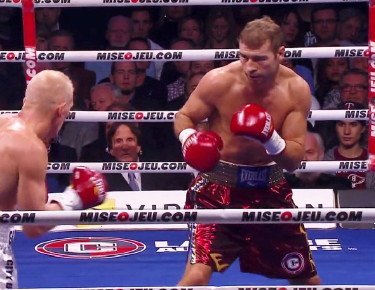 Lucian Bute (31-2, 24 KOs) will be looking to pick up the broken pieces of his career when he fights on December 6th at the Bell Centre in Montreal, Canada. Bute, a former IBF super middleweight champion, doesn’t have an opponent for the 12/6 date yet, but his promoters are working on it. Bute, 34, is expected to be facing a high quality fighter.

Bute lost his last fight in January to Jean Pascal by a 12 round unanimous decision. Bute put in a woeful performance in that fight by failing to take the fight to Pascal and let his hands go.

Bute looked like he was still shell-shocked from his 5th round knockout loss to Carl Froch from 2012.

Bute’s promoter Jean Bedard of InterBox said to tvasports.ca “He thinks he can go back to the same levels of performance than when he was world champion. Lucian wants to make a comeback in a big way.”

It doesn’t look like Bute is going to be able to recapture what he had before. It’s possible he might be able to capture a title if he goes after WBA light heavyweight champion Jurgen Braehmer before someone else beats him, but that’s probably Bute’s only real chance of winning a world title at this point until IBF/WBA champion Bernard Hopkins retires or gets beaten to free up his two titles.

Bute isn’t young either, so it’s not as if he has a lot of tie to wait around for a guy like Hopkins to retire. Bute doesn’t match-up well with WBC champ Adonis Stevenson or WBO champion Sergey Kovalev. It’s likely that Bute will be put in with Stevenson sooner or later, because it’ll give him a big payday but that’s a fight that Bute will likely lose badly.

Bute needs to fight with more aggression and throw more punches at this point in his career if he wants to win his next fight on December 6th. Bute rarely threw shots in his loss to Pascal last January, and he seemed to be just trying not to get knocked out in that fight. It was embarrassing to watch. Bute looked like a shadow of his former self.