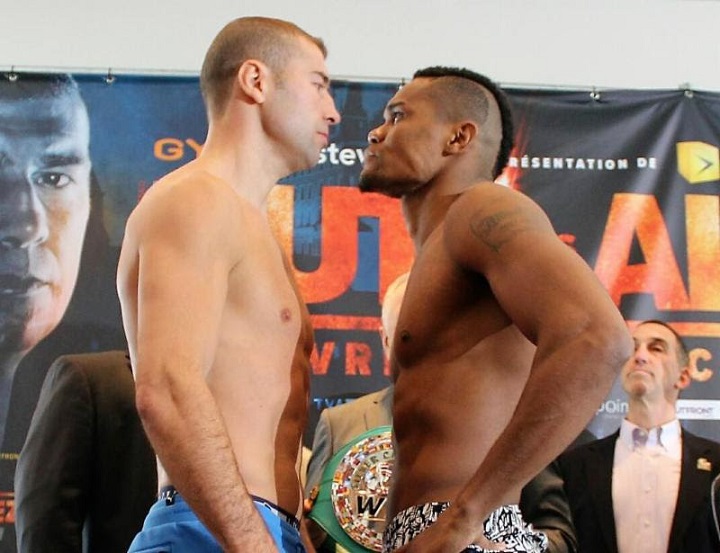 Eleider Alvarez (22-0, 11 KOs) had too much for 36-year-old Lucian Bute (32-4-1, 25 KOs) tonight in halting him in round 5 of a fairly one-sided fight on Friday evening at the Videotron Centre in Quebec City. The win for Eleider locks him in as the WBC mandatory challenger for WBC 175lb champion Adonis Stevenson.

Alvarez hurt Bute with a sharp right hand in the 5th. Alvarez then fired another right hand to the head of Bute that put him down on his backside. The fight was stopped after Bute got up and was unable to stand without swaying.

Through the first four rounds, Bute made it competitive with his constant pressure. Bute appeared to be landing more shots. Alvarez’s punches were landing cleaner though, and he seemed to be just enough to edge the rounds. It was still close though.

Bute came into round 5 with cut on the bridge of his nose. He was trying hard to put pressure on Alvarez, as he’d been getting beaten to the punch in the first rounds. When Bute did land a power shot, Alvarez would counter him with a fast punch that often landed with better power. The only thing that Bute could get away with without being countered was his jabs. But he wasn’t going to win the fight based off his jabs.

Bute tried his best tonight, but he didn’t have the power or the hand speed to get the win. Some of it may be age. A younger Bute probably would have beaten Alvarez, because he’s pretty flawed. But with Bute about to turn 37 and not having a win over a good opponent in 5 years since 2012, it was asking too much for him to beat a light heavyweight contender like Alvarez.

Neither fighter looked particularly good in comparison to the cream of the crop at 175. That’s not a knock on Bute and Alvarez. It’s more of a comment on the World Boxing Council’s rankings. Alvarez does not like he deserves to be ranked above Artur Beterbiev, Oleksandr Govzyk, Joe Smith Jr. or Sergey Kovalev.

Bute has now lost 4 out of his last 7 fights. His only wins have come against Andre Di Luisa and Denis Grachev. If Bute is going to continue fighting, then moving back down to 168 is a must for him. He does have the natural strength to fight at light heavyweight.

Eleider Alvarez is going to need to raise his game for him to beat Adonis Stevenson. Even though Stevenson is nearing 40, he looks a lot better than Alvarez. This should be another easy fight for Stevenson when the two of them eventually face each other.