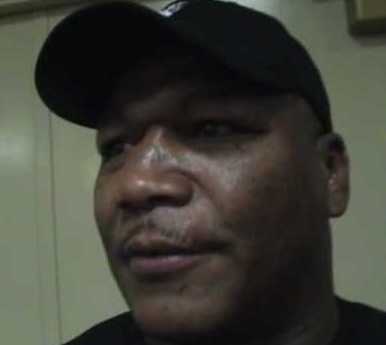 Known as “The Train,” 1990’s heavyweight Lionel Butler was a fearsome puncher who, at just 5’11,” became a genuine threat during his short but memorable prime – The man from New Orleans, who learned to box whilst in prison, hooked up with Joe Goossen in 1991 and went on a 17-fight win streak.

Butler says today that when he signed with Don King, things went downhill for him.

An interesting fighter who had a massive punch, Butler was thrown in with big names early one, and he also faced plenty of stars as he matured into a top contender.

Butler on his pro debut – against Phil Jackson, and his second pro bout – against Riddick Bowe:

“No way was I ready. I was green as can be. But I just listened to whatever and any advice I got at that time, from my trainer, and he convinced me I had a chance in those fights. But now, all these years later, looking back, of course I know I should never have been in there with a Bowe, who had, what, 200 amateur fights. I was way, way, way out of my depth.”

Butler on knocking down Oliver McCall:

“I beat McCall (in a 1990 fight, losing by split decision). By the slimmest margin, and being kindest to him, I’d say I won by two rounds. But no, I think I actually won every round. I even knocked him down, which he says all these years later, he was never knocked down. But that fight, it was his team, it was [on ] his promotion. But he knows I beat him.”

Butler on his big KO over Tony Tubbs:

“I was in shape for that fight. My left hook, that took Tubbs out, that was my favourite punch. For that fight, for the first ever time, I was in both mental shape and in physical shape. If you don’t have both, without the two going hand in hand, it’s almost impossible as a boxer. Boxing, they say, is almost 90-percent mental. I agree on that. I had matured, was serious about training and I had the mental ability to properly train and get ready for a big fight now.”

Butler on being avoided:

“Guys like Ray Mercer, Alex Stewart; quite a few guys, they wanted nothing to do with me. I knocked out some real good fighters and now no-one wanted to fight me.”

Butler on his stoppage loss to Lennox Lewis:

“That fight [with Lewis] was the biggest of my career, and (new promoter) Don King basically left me on my own in a hotel in Reno. I wasn’t in shape for that fight – again, not mentally, and that made me out of shape physically. I was demoralised before that fight. I never got paid. I was supposed to get $1 million for that fight, but I got just $180,000. I had slept with my wife just two days before the fight, and things like that just should not happen before any fight. If I’d been properly prepared, I believe I’d have beaten Lennox.”

Butler on the hardest puncher he faced:

“Razor Ruddock, who I only sparred with, ahead of his first fight with Mike Tyson – he was a monster! He hit me the hardest, no doubt. I also sparred the Klitschkos, in Germany, but Razor, nobody ever hit me close [to as hard.]”