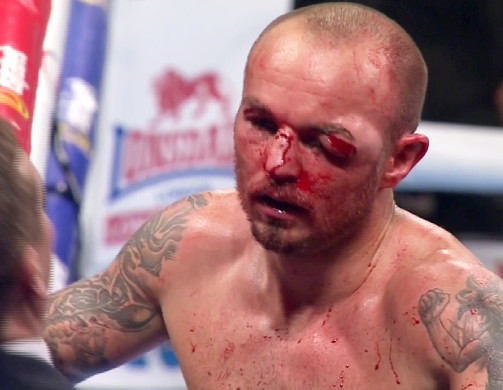 Now, given a few days for things to die down and given a chance to look at his options, Mitchell has spoken to Sky Sports News to talk about the possibility of a rematch, insisting that all parties involved are interested as far as he is aware.

“I’m gutted I still haven’t got that belt. Hopefully we can get that rematch.”

“I’ve heard they (chances) are very good. I’ve not spoken to Eddie at this stage, only my trainer and manager Tony Sims and he said there is a good chance that we’re gonna be getting it back on. I ain’t got a clue over times – all I know is they are up for the rematch, so that’s pretty good news if they’re up for it – pretty good news for me.”

Talking about the contest and how he felt the fight was going, he said.

“I was beating him at his own game, that was the best thing – I was boxing, I weren’t really attacking. I thought ‘he’s expecting me to go at him’ – I had him down in the 5th – I thought I was beating him but the cuts thing – it was just too much, with the head clashes, it held me back. I couldn’t see what was going on. But it’s just one of those things and hopefully we can get it back on again.”

Clearly appreciative of the fantastic reception he has received for the performance from fans and fight figures on the night and across social media in the aftermath, he said;

“Unbelievable. The crowd was unreal with me. The response I’ve had from social media, from the press and that, it’s just been brilliant. It’s been overwhelming to be fair.”

And asked if the rematch does indeed come off, what would he do differently? Mitchell said;

“Differently? It’d probably be the same sort of fight as it was last time. But I’ll keep away from his head this time! That’s the difference!”

Obviously, all talk of a rematch is provisional and perhaps a little premature – although there is absolutely no doubt it makes sense to get it on again, and what a treat it would be – although one suspects this time, it may be Mitchell who has to travel.

Of the future, with or without a Linares rematch, he said;

“Anyone (at 135) I’m interested in. I’m interested in any of the world champions. I think I’m a big threat to any of them champions out there now. You got Perez who’s fighting Anthony Crolla – also gonna be a good fight. The winner of that perhaps? We’ll see what Eddie wants to do, what Tony thinks and we’ll go from there.”

One thing is for sure. Kevin Mitchell can definitely come again. He may just win his world title yet.