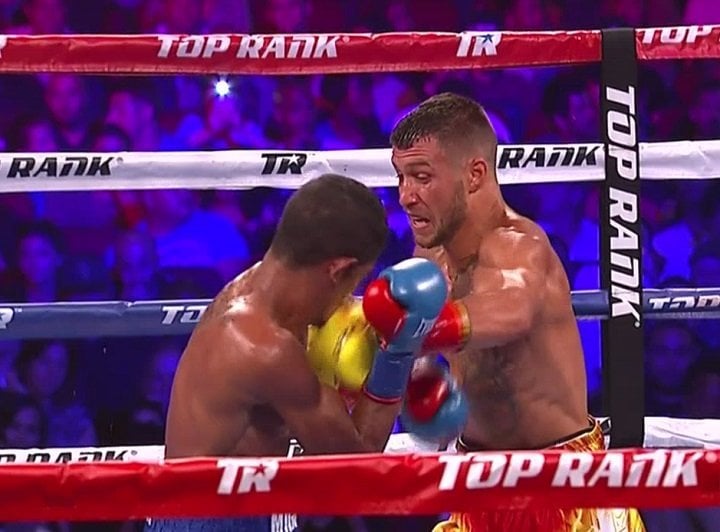 If things turn out as promoters Bob Arum and Oscar De La Hoya want them to, 2018 could turn out to be one of the best boxing years in a lone time, big fights-wise. We’ve just heard how GGG-Canelo II is on for May 5, and there are talks underway regarding another fight between pound-for-pound stars going at it.

Vasyl Lomachenko only wants the big, big fights, and the same goes for Jorge Linares. Now, according to a piece from Dan Rafael of ESPN.com, the two warriors are close to getting it on in the spring. Unlike many big name fighters, Linares is not looking to avoid Lomachenko – an incredible fighter who, as we know, doesn’t just beat up his opponents, he makes them flat-out quit – instead the lightweight champ has been actively calling him (and Mikey Garcia) out.

It could happen in either April or May:

“I’ve been talking to Mr. Honda (who co-promotes Linares) for a month about the possibility of Linares-Lomachenko,” Arum told ESPN.com. “But I had to wait for Linares to fight on Saturday and see how things turned out. Well, the kid won. Now we can discuss terms for the fight. I’m waiting to hear back from Honda. It’s being worked on for the next fight. Depending on how he (Linares, who hurt his hand in Saturday’s wide decision win over Mercito Gesta, and picked up a small cut) feels, the fight will be either April 28 or May 12.”

Lomachenko, 10-1(8) and last seen making unexpectedly easy work of Guillermo Rigondeaux, figures to get a far tougher test from the proud and classy Linares, 44-3(27). De La Hoya is as keen as Arum is to make this, a fight both champions want, and The Golden Boy head says that this match-up is one of the best fights that can be made this year. He is not wrong.

Will the seemingly untouchable Lomachenko be as fierce a force up at 135? Will Linares’ chin stand up to Loma’s best shots? This one will pit two of the best boxers of the lower weight divisions against one another and the sheer anticipation promises to be huge. Will Lomachenko win his third world title in as many weight divisions, or will Linares score the biggest win of his long career?

Email
WhatsApp
Tweet
Share
Previous boxing news: Like Father Like Son: Miguel Tyson the spitting image of his father during his teen years
Next boxing news: Montana Love faces Sam Teah on 2/2 on ShoBox
You are here: Home / Boxing News / Linares vs Lomachenko a possibility for April or May; talks underway
Follow @boxingnews24