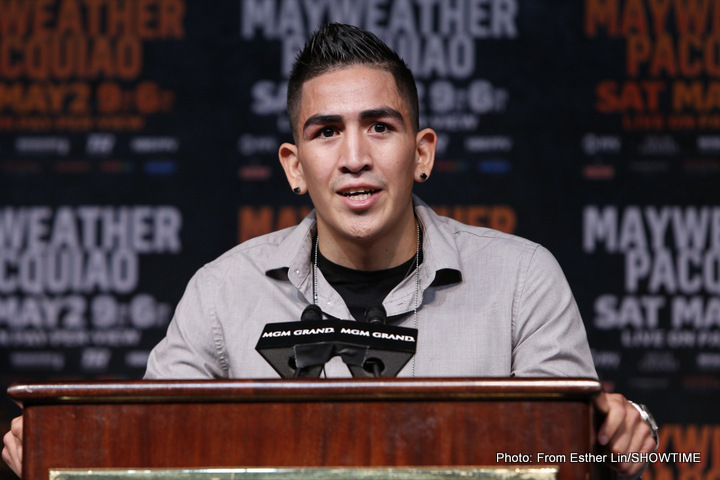 It’s been a long time coming but WBC super bantamweight champion Leo Santa Cruz may finally get the test the fans have been craving for him if he steps up to face California based Mexican rival Abner Mares, as is being mooted.

A provisional date of August 29th at the Staples Center in LA is being touted for the Premier Boxing Champion’s event, and Santa Cruz – who would move to 126 lb for the fight, is confident of dethroning his rival, saying via fighthubtv, that if the fight happens as expected, he can’t see it going the distance.

“I’ve started training hard already because I wanna be ready for when they tell me that I’m gonna fight.”

Santa Cruz will be moving up to 126 for the fight and insists that he has already begun adapting his training regimen to incorporate this, and maintains he feels “stronger and better at 126 lb”

Mares has been calling him out and criticized Leo’s fight on the Mayweather/Pacquiao undercard, insisting that he too was available and wanted to fight his countryman on that date in a contest befitting the occasion.

He has recently also criticized the level of opposition his rival has faced in relation to himself. Something Santa Cruz hasn’t taken too kindly to.

“When me and him fight, the fans will see that (his opposition) isn’t important. Once we are in that ring it’s gonna show who is the best – me, or him. I think I can beat him and I’ll go in 100% prepared to show him that it (prior opposition) doesn’t mean nothing.”

Pushed for a more specific prediction, he said;

“I think the fight will go by knockout. We both like to come forward so I don’t think it will go the distance.”