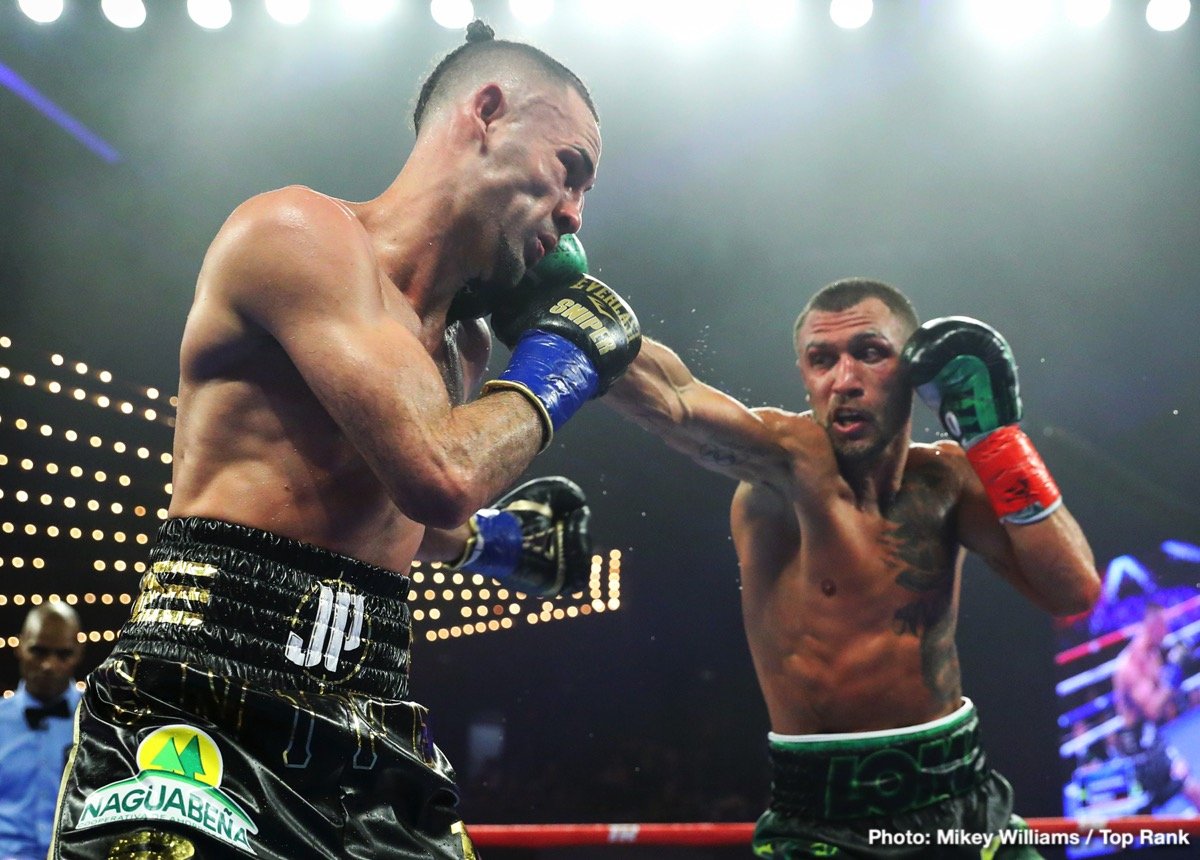 Raymond U. (San Diego, CA): Considering his stellar amateur career and what he has done so early as a pro, I feel Lomachenko is arguably the best smaller weight fighter ever. I think you’ve been very critical of him and I’m curious to know how did you grade his recent performance?

Vivek W. (B247): I think any time you give an unpopular opinion on rising stars it comes of as “critical”. Truth is, I like Lomachenko just like many fans out there, but that doesn’t prevent me from calling a spade a spade. Lomachenko is an amazing talent, but like every other man that has ever laced up, he has a ceiling. Many viewed him as this indestructible fighting machine, and some even went as far as calling him “defensively gifted”. The reality is that although he has a very fan-friendly style, his “ceiling” would never allow him to go beyond the type of opponent that’s tough enough to take his shots, and offensively gifted enough to punish him with their own.

I never felt he was “defensively gifted”. A fighter as predictable as Salido wouldn’t have landed as much against a fighter that was! There are so many facets to take into consideration when analyzing a fighter. Fans typically get excited about one or two things and for them, that fighter’s “sky” is the limit! I analyze this stuff differently. When I think of the attributes necessary to see a smaller fighter reach legendary status, I think two things: durability and power. Most fans will see speed and automatically assume that fighter has the goods. Gamboa, Gary Russell Jr., and many others had speed. Where did it get them when they ran up against fighters tough enough to take their punches and strong enough to hurt them with theirs? Lomachenko’s lone defeat came to a fighter that was actually pretty slow.

So the point I’m making is that the HOF curve or even the curve of true “greatness” is much steeper than speed. Like life, “speed” on a curve can get you killed for the simple fact that in the ring, it gives a false sense of confidence. In the Linares fight before the stoppage and in this fight with Pedraza, I think we learned yet again that his offensive prowess (centered around speed) simply isn’t enough on the next level. A bigger puncher like Tank, Garcia, or Pacquiao would have hurt and potentially stopped him. So to use that “C” word again (ceiling), I think Lomachenko’s best days will come no higher than 130. The more he crosses that line, the more vulnerable he’ll look. That’s also the reason I can’t call him the best smaller fighter ever, as Pacquiao and many others did far more against far greater.

Kelvin H. (Dallas, TX): Andre Ward and Floyd Mayweather were overly critical of Deontay Wilder in recent comments. I’d like to know what were your thoughts on their position?

Vito W. (B247): I was able to read excerpts from both Ward and Mayweather. Before I share my thoughts, I’ll just say that it’s awfully difficult to question or dispute the words of two of the most gifted fighters the sport has ever seen. Mayweather holds a legitimate argument as “The Best Ever”, with a resume to support that position. Ward is a guy I’ve said as far back as the “Super 6” Tournament that would potentially go down as the best fighter not-named Mayweather of this era. He also has the resume and Olympic Gold Medal to support his position. All that said, I think there is a little wiggle room to point the finger at both men, but not for the reason you may think.

I can’t say that either were wrong in their assessment. Both felt Wilder could have done a few things differently, and although I had the fight closer than they did, I would agree. Where my challenge with Ward comes is that he was in a very similar situation before and didn’t totally like the way Mayweather spoke out at that time. In this situation, he sat in the position of Mayweather (elder-statesman of the game), yet did the same thing he criticized Mayweather for, which was speaking publicly rather than “picking up the phone”. When Ward had the tough fight against Kovalev, he didn’t take the criticism too well. So personally, I would have liked him to respond differently.

Similar to Ward, FMW was very critical of Tyson, Roy Jones, and others when they spoke about his career. So all of this is basically a situation where these men have done to others what they didn’t want done to them. Mayweather’s comments were a little more acceptable, as they spoke his personal views on the actual performance. What Ward did was a step beyond, stating in so many words that Wilder would be better off simply moving on. Those words will never be welcomed by a fighter. Ward knows this. But in all fairness to both Ward and Mayweather, when you have microphones stuffed in your faced all day long, you’re bound to say SOMETHING someone won’t like. They were honest, and it’s their opinion. Wilder has a chance to prove them both wrong. Stay tuned.

Reginald F. (London, UK): Now that Wilder and Fury have fought, what do you see happening next based on all of the possibilities in the HW division?

Vito W. (B247): With the Wilder v Fury fight ending in a Draw, I think a number of things can happen. The good news is that neither fighter losing resulted in the fans winning! As no conclusion will be a bad one. There are a few ways this can all play out. The easiest conclusion, and as much as I hate to say it, the most logical one, is for Fury to take the regional fight with Joshua. There’s a ton of money to be made, and there’s a huge countrywide base that wants to see it. Knowing the threat Wilder presents to both, Fury would be better of taking that fight and knowing that he has the Wilder rematch in his back pocket, win, lose, or draw!

A Fury victory over Joshua would probably evoke a rematch, but that’s good news for Fury considering the purse involved, as well as the fact that I think his style is all bad for Joshua. A victory for Joshua would be totally bragging rights against Wilder, and considering the numbers Joshua v Fury would do, I think the leverage for Team Joshua in a new negotiation with Wilder would be off the charts! While Joshua v Fury is the best and perhaps most logical fight to make, I think the one I’d prefer to see is Wilder v Fury II. America is a different market than the UK, so I don’t see it being as big as either Wilder or Fury facing Joshua; but I do think it gives us a clear and precise winner heading into a Fall showdown with Joshua.

What I like the most is that rematches and trilogy possibilities will tie these 3 men up for another 18 months easily. While we watch them sort things out, you have other Heavyweights evolving that will enter the equation. So the once dull HW division has caught fire and each of these men have another 4yrs minimum to fight. So this is a great time for the sport and hopefully we get these fights, minus all of the hyperbole we’ve seen from time to time. Stay tuned.