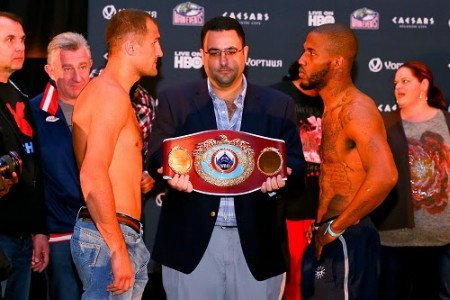 (Photo Credit: Rich Graessle/Main Events) For fans wanting to see tonight’s light heavyweight clash on HBO between WBO 175lb champion Sergey Kovalev (23-0-1, 20 KO’s) and challenger Cedric Agnew (26-0, 13 KO’s), I would suggest that they not walk away from their television sets during the fight for a refreshment break, because this one has quick knockout written all over it. Agnew is going to be on the canvas in this fight for the 10 count, and there’s probably nothing he can do to prevent this from taking place.

I’m not going to say that Agnew has no chance to win the fight, because every fighter has a chance. But Agnew’s chances of winning this fight are so incredibly small that it’s not even worth mentioning. Agnew doesn’t have the speed, power, skills or experience for him to last more than a couple of rounds at best.

In looking at some of Agnew’s past fights, he seems to be a guy who likes to mix it up with his opponents despite having very little in the way of power. That’s not a good thing for him going up against a puncher like Kovalev. It means that Agnew will need to change his fighting style completely for him to survive into the later rounds, and even then we’re still talking about a one-sided fight with Kovalev pounding the living daylights out of him.

Kovalev will very likely flatten Agnew in one or two rounds, and fans will have learned nothing from the fight. Kovalev needs to be matched against better opposition than this, but the problem is the only two good light heavyweights in the division – Adonis Stevenson and Bernard Hopkins – fight for Showtime, and that means we’ll never see Kovalev get a chance to fight either of them. So unless one of the 168lb fighters moves up in weight in the near future, we’re going to be seeing Kovalev continue to blast out guys that few people have even heard of.

Tonight’s bout will be taking place at the Boardwalk Hall in Atlantic City, New Jersey. It has a decent but not great co-feature bout between a couple of contenders in Karim Mayfield and Thomas Dulorme fighting it out. Mayfield will probably win unless Dulorme can get to him with his power. Dulorme can punch, but his chin is clearly a problem for him as we saw in his 7th round TKO loss to Luis Carlos Abregu in 2012.

Dulorme moved down in weight to the 140lb division after that loss, and he’s won his last four fights against weak opposition. He’s being put back in with quality opposition for tonight’s fight, so anything is possible.