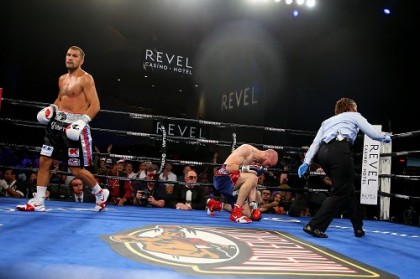 (Photo Credit: Rich Graessle/Main Events) In the much-anticipated WBO Light Heavyweight World Championship bout, Sergey “Krusher” Kovalev (25-0-1, 23 KO’s*) takes down undefeated Australian challenger Blake “Il Capo” Caparello (19-1-1, 6 KO’s) in the second round in the third defense of his WBO Light Heavyweight World Title. Kovalev was under a microscope these last few days with the possibility of a unification bout with Bernard “Alien” Hopkins looming. Krusher did not let the pressure get to him, he focused only on the opponent in the ring with him tonight.

Kovalev and Caparello were feeling each other out in the first round. Caparello knocked Sergey off balance in the first and his glove touched the canvas, but Krusher got back up quickly. Blake went down in the second from a crushing body blow but beat the count. He taunted Kovalev to come back at him which Krusher did in relentless fashion. After two more knockdowns, referee Sparkle Lee called it off at 1:47 of round two.

In the final bout before the live telecast on HBO Boxing After Dark, junior middleweight Dmitry Mikhaylenko (17-0, 6 KO’s) remained undefeated by unanimous decision in eight rounds against Sechew Powell (26-6, 15 KO’s). In the third round, Mikhaylenko had Powell up against the ropes. Dmitry came back out swinging in the fourth and kept Powell in the corner for most of the round. Mikhaylenko came out strong in the sixth but Powell managed to hold his own against the Russian. Dmitry tried hard to finish off Powell in the eighth and final round. Powell did not land many punches towards the end of the fight but the Brooklyn native managed to go the distance against Mikhaylenko’s continuous attack. The judges scored the bout 78-74, 79-73, 80-72 all in favor of Mikhaylenko.

Light heavyweight Isaac “Golden Boy” Chilemba (23-2-2, 10 KO’s) stopped Cory “Black Ice” Cummings (17-7-1, 13 KO’s) in the seventh round. Early in the fight both fighters appeared evenly matched. Cummings is much shorter than Chilemba but the height difference did not appear to both Black Ice. Cummings connected a hard right to Chilemba’s chin in the fifth. Isaac came out with a vengeance in the sixth. Cummings’ left eye was starting to swell closed in the later rounds. Finally, referee, Eric Dali, stopped the fight at 2:28 in the seventh round to give Chilemba the victory via TKO.

Isaac said after the fight, “I feel good. It was a good fight. He was well prepared for the fight. He came out strong and took some of my best shots until he just couldn’t take anymore. I want a title shot next. I am hoping Jean Pascal is the next one; I am hoping to get a chance at him or chance at Kovalev next.” His manager, Jodi Solomon added, “I am really proud of Isaac. The work he put in has really paid off and we just need to keep pushing harder. If he keeps pushing I think he is capable of anything.”

Fan favorite undefeated heavyweight Adam “Baby Face” Kownacki (7-0, 7 KO’s) kept his perfect 100% knockout-to-win ration alive knocking out Wichita, KS native Charles Ellis (9-2-1, 8 KO’s) at 0:15 of the fifth round. Kownacki entered Ovation Hall to a rowdy crowd cheering him on. The Polish native (now residing in Brooklyn, NY) came out swinging trying to keep his perfect record in tact. Ellis was able to make contact with a couple of hard shots in the early rounds but eventually succumbed to Kownacki in the fifth. This was the longest fight of Kownacki’s professional career so far. Previously Kownacki’s longest fight was his fourth round knockout of Yohan Banks on May 22, 2010.

In a heavyweight fight for Philadelphia bragging rights Joey Dawejko (11-3-2, 4 KO’s) took down David Williams (7-9-2, 2 KO’s) in the first round at 1:48. Dawejko came out of the gates swinging and knocked down Williams three times before the referee finally called the fight.

In the first fight of the evening a Philly vs. Jersey middleweight match-up, Hakim “Braveheart” Bryant (2-0, 1 KO) of Middletown, NJ remained undefeated by knocking out Anthony Watson (0-2) of Philadelphia, PA at 0:38 in the fourth and final round of the contest.

*All records have been updated to reflect tonight’s results.